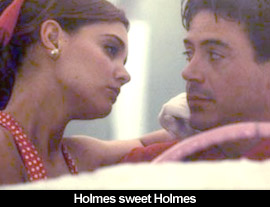 by Walter Chaw A film about transplants (UK to America, Michael Gambon to Robert Downey Jr., postwar-'40s English tunes to 1950s American doo-wop), The Singing Detective has as its most effective moments the parts transplanted whole from Dennis Potter's amazing six-hour BBC miniseries. Not to say that Keith Gordon's The Singing Detective isn't a frequently fascinating beast all by itself (the late Potter's own screenplay, shot nearly word-for-word by Gordon, assures a measure of quality almost deliriously high), but to say that the inevitable comparisons will be harsh and, frankly, unfair, given the author's hand in the adaptation and the strain of compression.

What's evident in Gordon's version is the director's steady hand, his brilliant touch with actors, and his amazing sympathy for the melancholy ebbs and tides of an individual lost and teetering on the precipice between cold reality and the cold comfort of his fantasies. But the deliriously personal touch for which Gordon is known--or should be known--is missing. Brought into the production at the eleventh hour with most of the elements already in place (though he was able to invite his long-time editor (Jeff Wishengrad) and DP (Tom Richmond) along for the ride), he feels a little handcuffed in this project, and seems to compensate with a sort of bedazzled detachment that is more like reverence than involvement and discovery.

Danny Dark (Downey Jr., his character renamed from the original's nom de noir Phillip Marlowe, which results in a strange echo of Richard Kelly's Donnie Darko) is afflicted with an ugly case of psoriasis that renders him, for all intents and purposes, a prisoner in his own body. Forced inward, Dark relives a hardboiled detective novel he's written, recast with himself as the P.I.; endures sessions with a persistent therapist, Dr. Gibbon (Mel Gibson); and begins to draw together the strings of his past with the frayed ends of his present. Seeking to create a creature as all-American as his mini-series was all-British, Potter's script substitutes temporal idiom for temporal idiom while Gordon, shooting almost entirely on soundstages, evokes sets from the heyday of American films noir: the slatted blind office of The Maltese Falcon, the urban midnight of Night and the City, the blasted gas station of Out of the Past, and so on.

The picture looks wonderful, but one can't help but think that it's composed of surfaces when Potter's screenplay is all depths and phantoms. The Singing Detective lacks spontaneity for all its flights of fancy and discovery for all its revelations and grotesqueries. As an Oedipal detective story, complete with a gorgeous mother/whore/corpse (Carla Gugino) and gorgeous wife/whore/corpse (Robin Wright Penn), it compels as it does through any number of intellectual avenues and close dissections, yet a sense of real danger and that attendant feeling of genuine relief and revelation seems to be absent. It's here that the rift between the British and the Yankee is most apparent, that relative level of maturity that allows the one to explore its themes and epiphanies at leisure and the other only in pops and spasms--the difference made manifest in that between Gambon and Downey Jr.. The Singing Detective is an amazing failure that's too good to ignore, a film deserving of a conversation and, in no higher praise, of unreasonable comparisons. Originally published: October 24, 2003.