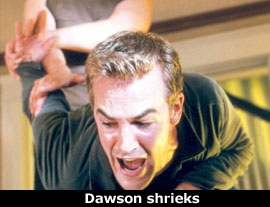 by Walter Chaw Roger Avary's The Rules of Attraction jitters and grooves like a thing possessed. It's a post-modern Less Than Zero based on a below-average book by nihilism wunderkind Bret Easton Ellis transformed by a pair of exceptional performances and the insouciant style of Avary (more, Avary's one-time partner-in-crime Quentin Tarantino) into a portrait of college life feral and uncomfortable. It handles time and traditional narrative structures with an expert insolence and earns points besides for making a cunning pop cultural reference to Sheriff Buford Pusser and Walking Tall. It's too smart to outsmart itself, then, juggling its in-references with a kind of casual offhandedness that allows the proscenium to be occupied by a surprisingly piquant trio of character sketches.

Sean Bateman (James Van Der Beek)--apparent brother of American Psycho's Patrick (also based on an Ellis novel)--is a drug dealer, an unrepentant womanizer, and infatuated with the idea that Lauren (Shannyn Sossamon) might be sending him scented love letters on purple stationary. Lauren is a vaginal virgin infatuated with the ideal of a long-lost boyfriend (Kip Pardue) away on a European vacation, and Paul (Ian Somerhalder) is a gay man infatuated with the caveat that bedding Sean represents.

The Rules of Attraction details each of the three characters' story arcs as they slam into one another at an apocalyptic party. It twists traditional plot conveniences into something at once fresh and refreshing while sketching a portrait of the venal allure of college in bold strokes. Drug use, casual sex, and other things that one usually ends up regretting and pining for in equal measure are presented with exactly the same degree of frankness as one would find on nearly every college campus in the United States. A difficult suicide scene (all the more so for the fact that it's scored to the music of Air Supply) locates the picture's intention to provide visceral touchstones occasionally in the midst of the film's ethereal bacchanalia; the soundtrack, the best non-Wes Anderson mix in years, deposits Sisters of Mercy in the company of Milla and PIL.

Kinetic, hilarious, and powerful, the highlight of The Rules of Attraction comes as the sociopathically maladjusted Sean receives a surrogate teardrop from a well-placed snowflake: an agile and lovely gimmick that works to develop character, define the scene's emotional centre, and move in a way that's surprising and poignant. Avary somehow elicits brilliant performances from Van Der Beek and Jessica Biel while being canny enough to cast Eric Stoltz as the lizard-lidded professorial type he played so well in the underseen Kicking and Screaming. Brazenly untraditional but respectful of craft, the picture reminds in more than just structure and content of Doug Liman's fantastically irresponsible Go. Atoning for the over-hashed misanthropy of Killing Zoe, that Avary can now be compared to arguably the best and most consistent of the new turk directors is not only something of a shocker: it's a cause for celebration. Originally published: October 11, 2002.