Please note that all framegrabs are from the 1080p versions

by Bill Chambers Although Walter Chaw and Alex Jackson already covered The Goonies and Beetlejuice (hereafter Beetle Juice), respectively, for our humble little website, I feel obliged to say something about these films before moving on to the technical portion of this review. Firstly, I don't think I'd seen The Goonies from beginning to end since the '80s, and it took me a week to get through it this time. I summed up the experience on Letterboxd as "like being buried alive in the ball pit at Chuck E. Cheese," which was equally true no matter where I started from; The Goonies is just so screamy. To a certain extent, that's verisimilitude--this is, after all, a movie about a gaggle of teens and preteens on a treasure hunt, hopped up on sugar, hormones, and the fantasy of instant wealth. But it isn't merely that they're rambunctious--they're also mean.

Consider how swiftly the filmmakers undermine our shipping of Brand (Josh Brolin in a bandanna) and cheerleader Andy (Kerri Green), two high-schoolers at different strata of popularity who become de facto babysitters of the younger kids: When Andy sweetly summons Brand for their first kiss, he sends his baby bro Mikey (Sean Astin) in his stead, instructing him to "go see what she's ragging about." What a charmer. Consider how Mikey's friend Mouth (Corey Feldman) volunteers to translate everything Mrs. Walsh (Mary Ellen Trainor) says to Rosalita (Lupe Ontiveros), i.e., the help, into Spanish, then proceeds to say things like, "If you do a bad job, you'll be locked in here with the cockroaches for two weeks without food or water" when Mrs. Walsh asks him to point out the supply closet to her. All of his "jokes" ostensibly sabotage Mrs. Walsh but demean only Rosalita. (Consider, too, the absolute cynicism of a script that gives Mrs. Walsh a broken arm just to pave the way for this racist set-piece in which she brings home a Mexican woman to assist her in packing for a move. (How did they even get that far in conversation if they're at such an impasse as to be relying on Mouth to communicate?))

Mention The Goonies and some dude will inevitably chime in that "it's a movie from when kids weren't raised as pussies," as one Twitter user put it to me. The problem with kids behaving badly (read: typically) in kids movies (e.g., The Goonies) as opposed to movies about kids (e.g., Stand by Me) is that some combination of nostalgia and criminally low standards for children's fare tends to extend the shelf-life of these films indefinitely, and what was reflective of one generation is often poised to corrupt the next. When I reviewed The Monster Squad, I said its homophobic slurs made me reluctant to pass it down to younger relatives; The Goonies is toxic enough that I would similarly think twice before handing it off to a child. If you're lauding director Richard Donner, producer Steven Spielberg (who allegedly split directing duties with Donner à la Poltergeist), and screenwriter Chris Columbus for keeping it real when it comes to language and attitude, ask yourself why that's a virtue in a movie that features a friendly giant with an egg-shaped head, ghost pirate ships, and a nonsensical moment where one Goonie (Goony?), the zaftig Chunk, gets so excited looking out the window of a pizzeria that he smooshes his slice and milkshake against it. The Goonies even engages in its own disinformation campaign: At one point, evil jock Troy (Steve Antin, later typecast as a goading rapist in The Accused) tilts his rearview mirror to see up Andy's skirt, but when she brings up the incident to Brand she sugarcoats it by saying he was trying to look down her shirt. That may be Andy choosing her words carefully to preserve her dignity, yet somehow I doubt the creators of the Truffle Shuffle are striving for nuance and subtext here. It's a peculiar bit of gaslighting in a film whose high production values and juvenile subject matter amount to Eddie Haskell's superficial politeness. 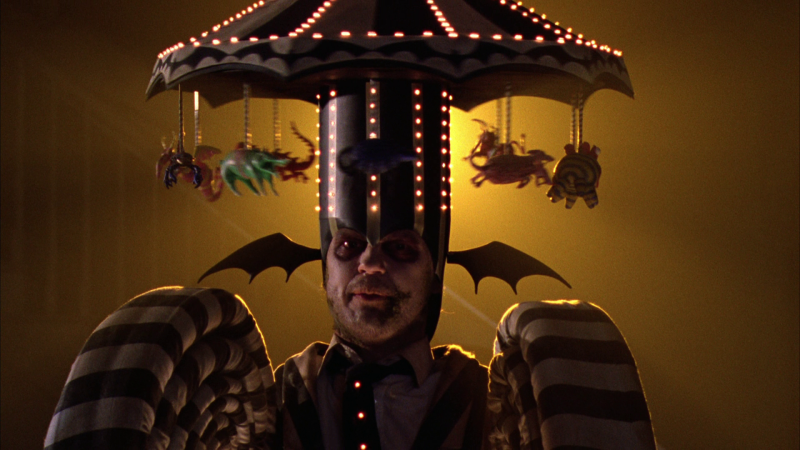 In a way, Pee-Wee's Big Adventure is The Discreet Charm of the Bourgeoisie to Beetle Juice's The Exterminating Angel: Tim Burton had made his feature debut with a movie about a guy on a wild goose chase, and he followed that up with a movie about a couple who couldn't leave their house. They're not exactly opposites, more like flip sides, and they're united by a comic sensibility that got disrupted by the specific demands of Batman and never quite returned to Burton's work. Those first two films and even Batman are really about hardcore solipsists, men who curate their environments so carefully as to exist in a bubble (Beetle Juice's Adam (Alec Baldwin) has painstakingly reconstructed the town he lives in as a scale model in his attic), and perhaps it's an occupational hazard that he became one himself; when the Avon Lady adopts Edward Scissorhands, Burton's suburbia is so expressionistic in itself that the image of Robert Smith-esque sadboi Edward in a pastel dollhouse doesn't have the dynamic punch that, say, the bespoke Pee-Wee Herman confronting Twisted Sister does. Beetle Juice is founded on these absurd juxtapositions--none funnier, if you ask me, than when an undead football team calls the ancient, gravel-voiced Sylvia Sidney "coach." It's also nice, for what it's worth, seeing Burton regard jocks with something besides contempt, or at least a gentler-than-usual contempt. They even return as Winona Ryder's backup dancers in the film's closing shot! No, it doesn't make any sense, but Burton sure knew how to fill the frame back then.

Unfortunately, Beetle Juice isn't a whole lot more than a collection of incongruities: rural and cosmopolitan, folk art and modern art, calypso music and poltergeists. There's an underlying pathos here that Burton, at this stage of the game, isn't ready to grapple with, involving a once-barren, now-deceased couple, the Maitlands (Geena Davis and Baldwin), becoming surrogate parents to Lydia Deetz (Ryder), the living daughter of the family that now occupies their home. The film ends with Lydia's displaced father and stepmother (Jeffrey Jones and Catherine O'Hara) hearing but not participating in the party the Maitlands are throwing for Lydia downstairs to celebrate the "A" she got on a math test. I've always found the Roald Dahl-ian comeuppance of Mr. & Mrs. Deetz to be low-key disturbing, not only because this wholesale severing of ties seems gratuitous, but also because it's presented to us so glibly. For all the picture's cheeky ghoulishness (Lydia and Harold and Maude's Harold are kindred spirits), this final sting in the tail revealing that the Deetzes have effectively swapped corporeal/phantasmic status with the Maitlands always felt to me like it belonged in a much darker film. (Thank goodness Burton had the inspiration in post-production to go back and temper this ending with one last dollop of Michael Keaton's still-uproarious title character.) Still, you've got to hand it to Burton for leaving his stamp on the popular imagination during this period--you can't put jailhouse stripes on anything in "Project Runway" without someone invoking the name of everyone's favourite bio-exorcist. Just don't say it three times.

The Goonies and Beetle Juice both put their best foot forward in 4K UHD; if they were ever going to seduce me, this would've been the vehicle for it. The Goonies docks in a 2.40:1, 2160p transfer that advances on an already-strong Blu-ray presentation. Frankly, it's always looked pretty good on video, even on VHS in pan-and-scan, thanks to some fairly flat, TV-friendly lighting courtesy of DP Nick McLean, who would go on to shoot 89 episodes of "Friends" and 26 episodes of its spin-off, "Joey". The Goonies is also unusually sharp for a 'scope picture, especially in 4K, where its glassy clarity adds a certain amount of visual interest to close-up and background detail alike. The HDR10 enhancement deepens blacks and makes the splashes of colour (like Chunk's Hawaiian shirt, or Mikey's yellow slicker) that break up the monotony of the Oregon locations truly pop, and though the highlights are dialled right up--these are the whitest white titles you will ever see--something tells me that fans of The Goonies aren't sticklers for subtlety and restraint. I do find the dearth of film grain in the image to be slightly suspect, however. Surprisingly, the film's audio did not score a Dolby Atmos upgrade, although the 5.1 DTS-HD MA track is perfectly adept at meeting the picture's theme-park energy level. (I can only assume this is the same six-track mix that graced 70mm prints back in 1985.) For better or worse, the A/V is primed to assault the senses from beginning to end. Compensating for a bare-bones 4K platter, the accompanying Blu-ray from 2010 recycles all of the supplements discussed in Walter's DVD review from 2001. An additional gift set is available that bundles the movie with a map and a few buttons in corny treasure-chest packaging.

Remastered in its 1.85:1 aspect ratio for 4K, Beetle Juice is above reproach in UHD. The movie's handmade quality shines through in the tactile interplay of textures, from the découpage walls in the corridors of the Afterlife to the crushed velvet of Beetlejuice's wine-coloured tuxedo. Though Beetle Juice is famously a showcase for vivid colours, here those floods of green and blue enjoy newfound brilliance while looking significantly less one-note than they do on Blu-ray. The whole film is more luminous than ever before, with deeper blacks to match, and the HDR10 highlights reinvigorate a variety of light sources, from the flames in the Maitlands' fireplace to the Vegas-style signs that beckon Beetlejuice towards Dante's Inferno Room. (A little lamp on Juno's desk now burns a striking red and loses its SDR colour bleed, too.) Compared to the 2008 Blu-ray, included in this edition of Beetle Juice, the 4K UHD presentation boasts a tighter, better-defined grain structure that restores a substantial amount of fine detail to the image, some of it quite repulsive where the (Oscar-winning) makeup is concerned. The attendant Dolby Atmos track is ferocious, even in a setup without height channels such as mine. There's a case to be made that the film sounds too big in this incarnation, overwhelming the charmingly ramshackle visuals in a manner reminiscent of "Star Trek"'s bassy 5.1 remixes. I wish the original Dolby Stereo soundtrack had been preserved on this disc as well, for comparison if not posterity. (The disc is likewise missing the Blu-ray's isolated score.) As with The Goonies, while there are no extras on the 4K platter, Beetle Juice does come with a voucher for a digital copy, plus there's a separate gift-set version available that contains the Handbook for the Recently Deceased, chalk (!), and other ephemera destined for the landfill. 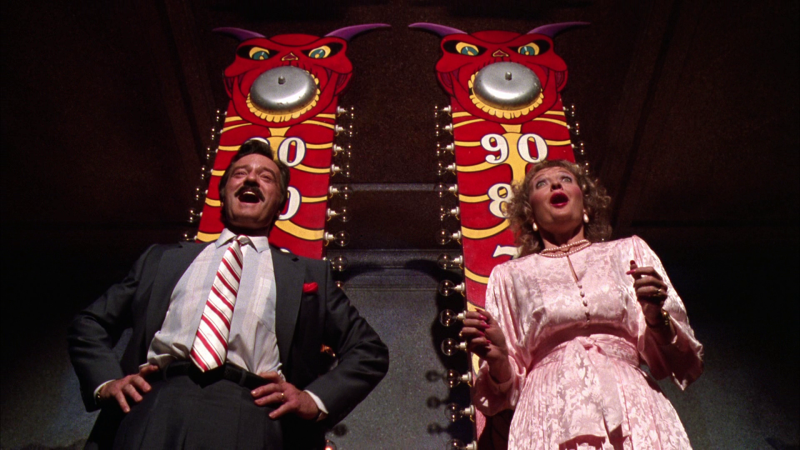