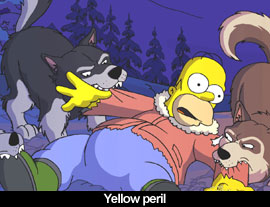 by Walter Chaw I had the great fortune to revisit Michael Almereyda's astounding Hamlet the other night with a smart, engaged audience, and more than once during Danny Boyle's Sunshine it occurred to me that Almereyda should've directed it. Almereyda, after all, would've made the movie beautiful and intelligent--wouldn't have leaned on genre conventions like a late picture boogeyman too much like Rutger Hauer's Roy Batty (and Blade Runner's just one of the dozens of pictures the film cribs from). He would've had sufficient faith in the premise to not muck it up with one metaphor for the fall of man too many. Sunshine is gorgeous for much of its run, however, good enough to merit comparison to Soderbergh's Solaris (though not Tarkovsky's, mind you--it's never that introspective) in its careful juxtaposition of human frailty against the awesome, insensate inscrutability of the universe. Set in a not-too-distant future where the sun is suffering from the need for a little jump-start, the picture opens seven years after the first expedition to save the world, the badly-/poignantly-named "Icarus I", has disappeared and a second expedition carrying the last of Earth's fissionable material ("Icarus II", natch) has been dispatched. Once they've encountered the rescue beacon of their predecessor, the ship's crew of seven--three of them Asian, which is really kind of amazing (a fourth is Maori)--gradually comes to realize that they're on a mission to touch the face of God.

Visually, the Icarus II looks like a sperm cell (its giant spherical "payload" trails a long ship behind it), while the sun, in scale and shape, looks like the egg, making the inevitable union of the two, giving nothing away, something clearly meant to evoke either a successful or unsuccessful act of reproduction. That this act is equated with the divine is the clearest reference to the weird spirituality Boyle seems incapable of steering clear of in his post-Trainspotting work, though its payoff with one character actually given the opportunity to reach out and caress the celestial wellspring is, without question, inspiring and mysterious. Had the rest of Sunshine only bathed so rapturously in the sublime, in that effortless mixture of something so familiar and something so, at its core, unknown and miraculous. Sperm and eggs are knowable quantities--that moment of fission that begins (or, in this case, perpetuates) life, not so much. Sunshine is involved in big questions; shipboard shrink Searle (Cliff Curtis) develops a sunshine intoxication in the Icarus II's forward observation deck ("Darkness is the absence of something, light is...physical"), and his genuflection before our star's withering gaze is echoed later in the aspect of other penitents in other places. Sun worshiper: ain't we all? No less than Milton (and no more than Morrissey) played with the homonym of sun/Son in the Christian mythology--but every terrestrial religion is founded at some point in its development in the veneration of this particular celestial body. A reunion with it in this way is a literalization of at least two waypoints along the journey of the hero, and as long as the picture maintains a philosophical distance, there is about it a magisterial, ravishing loveliness.

But as with Boyle's 28 Days Later..., somewhere along the way a decision was made to contort the film into something that it's not. I like the choice to never show the baddie as anything other than an allegorical smear, but I would've liked more time to explore the connection Corazon (Michelle Yeoh) has with her Silent Running oxygen garden; more time with the relationship between physicist Capa (Cillian Murphy) and the flat gorgeous Cassie (Rose Byrne, hers and Murphy's presence meaning that both "Later" films are represented here); and certainly more time with communications officer Harvey (Troy Garity), who represents the picture's only moment of selfishness. If there's a highlight in this film full of highlights (some approaching transcendence), it's the fate of the captain of the Icarus II, Kaneda (the great Hiroyuki Sanada): how it's faced, how it's received, and, especially, the curiosity and wonder with which it's embraced. Sunshine is about the impossibility of knowledge and the ceaseless splendour of existence--at least it is until it loses its nerve.

Nerve is something the long-gestating The Simpsons Movie has in spades, evinced by its already notorious, unapologetic, hilarious display of a certain marble sack. For the rest of it, it's more than, if not much more than, an extended episode of the television show, the picture marked by its inability to do more with the relative freedom afforded it by the cinema (compare this to the "South Park" flick) and by no more or less political verve than any single instalment of the series manages. Taking shots at the pathetic response to Hurricane Katrina in its vaguely-environmentalist nods to Al Gore's newfound/long-sought-after rock stardom outside the Rose Garden, or at Cheney-as-puppet master and Hillary Clinton as someone else's vice president, doesn't require that much inspiration. Its resolution, featuring the Simpson clan again reminding how their travails are ultimately about the scar tissue we amass for the sake of holding a family together, is by now, I confess, starting to get on my nerves. In how big is its crisis (indeed, after Homer empties a silo of hog waste into Lake Springfield--which does its good deed by drowning Green Day--Springfield is quarantined from the rest of the world) and how dedicated it is to move the family outside its comfort zone while indulging in wearying in-jokes like the real location of the town, the film grates as much as it surprises. Worse, it betrays itself as the old man at the party, who's told some of his stories one time too many.

With animation amped-up enough to draw attention to itself and fits of random pop-culture that resemble "Family Guy" instead of the other way around, The Simpsons Movie isn't a disaster--it's just that its suggestion that Arnold Schwarzenegger could be President is as unsurprising as its suggestion that The Governator might be illiterate. Maybe time and cynicism have caught up with "The Simpsons"; the flipside of the Bush Administration being a boon to comics and satirists is that things are so absurd now that almost nothing we could dream of could actually be more absurd. I'd like to spend some time talking about how Ah-nuld's belligerent neo-conservatism is exactly like Bush Jr.'s, but what's the point of continually potting the same fish in a barrel swiftly-shrinking? It all appears to be "feel good" satire capped with the usual message of family: the skewering of organized religion is trenchant, but it's always trenchant; the headlong naked skateboarding choreography is snickersnack, but didn't we see something like this in the Wallace & Gromit flick? "The Simpsons"' sell-by date expired a few years ago, with recent episodes, like this film, sometimes demonstrating some of the flair that made the series great--but more often demonstrating how close the show is to becoming part of the entrenched, comfortable establishment it used to rail against. Originally published: July 27, 2007.

THE SIMPSONS MOVIE - THE BLU-RAY DISC
by Bill Chambers Fox shepherds The Simpsons Movie to Blu-ray in a sparkling 2.40:1, 1080p presentation. For many, this will mark their first exposure to 2-D animation on a next-gen format (understanding of course that the film was still created on a computer), and my immediate reaction is: bring on Looney Tunes and the Disney classics! Of course, they'll never look as, well, clean as The Simpsons Movie does here; the image is flawless, the old-school MPEG-2 compression not seeming to matter one iota. I realize that's a word I tend to throw around a lot, "flawless," but I've scarcely meant it more. Please note that the opening Itchy & Scratchy cartoon is intentionally windowboxed at 1.77:1 to underscore the transition from the show's TV dimensions to CinemaScope--there is nothing wrong with the transfer. Matching the video in definition and clarity is the DTS HD 5.1 Master Lossless Audio, even though I could only access the 1.5mbps core of it. While the mix itself is a bit hemispheric (disappointingly so, given the aim to 'open up' the picture visually), stereo imaging is phenomenal, bass packs a wallop, and voices are easy to decipher no matter how outlandish they get, which isn't always the case with the series.

A surprisingly slim helping of supplements begins with two yak-tracks. The first--featuring director David Silverman, co-writers Matt Groening, James L. Brooks, Al Jean, and Mike Scully, and actors Dan Castellaneta and Yeardley Smith--is unique in that it runs 20 minutes longer than The Simpsons Movie proper, with the action pausing periodically and fading to black-and-white to allow one or more of the commentators in question to finish a train of thought. The longest freeze follows the heartbreaking wedding-video scene to accommodate an extended discussion of Brooks's gruelling perfectionism (Julie Kavner did well over 100 takes of Marge's break-up monologue--"And we used take two," Brooks quips) and the difference between acting for the show and for the film. This commentary was recorded before the movie came out, leading to much speculation on how it will be received based on test-screening responses. The second, much less engaging yakker, teaming Silverman with "sequence directors" Mike B. Anderson, Steven Dean Moore, and Rich Moore, was recorded after the film was an established hit and basically exists to assign credit to specific chunks of animation.

Also on board are six deleted scenes totalling five minutes. More or less animated to completion, these reveal an earlier, leftier incarnation of Russ Cargill (the abandonment of which, according to the commentaries, cost Burger King a fortune, since they'd already pressed the toy), Patty and Selma's expunged cameo, and "a slightly alternate ending" that brings back the mutant chipmunk for a blink-or-miss gag. A section of "Special Stuff" compiles the various promotional appearances from when The Simpsons made the rounds last summer, including Homer's "Tonight Show" monologue (2 mins.); "American Idol"-themed skits in which the family judges Simon Cowell (Homer=Simon, Lisa=Paula, and Marge=Randy) and Homer stands in for Ryan Seacrest (1 min. and 30s, respectively); and a very funny spoof of the "Let's All Go to the Lobby" jingle (20s). For what it's worth, all of the video-based extras are in HiDef--ditto the five trailers for The Simpsons Movie and pre-menu trailers for Alvin and the Chipmunks and Futurama: Bender's Big Score (itself AWOL on BD). Originally published: December 17, 2007.