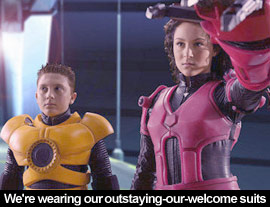 by Walter Chaw Robert Rodriguez's deeply unpleasant conclusion to his Spy Kids trilogy lacks the smarts and inventiveness of the first two films in the series, putting all of its eggs in a 3-D basket that is so certain to cause headache that bottles of aspirin should be passed out alongside the flimsy red/blue glasses. All the weaknesses of the previous Spy Kids entries, unbolstered in Spy Kids 3-D: Game Over (hereafter Spy Kids 3) by a sense of joy and innovation, are unforgivable in this film: the genuinely awful child actors, the cheesy special effects, and that certain air of imported moral superiority that seems a late-hour attempt to justify the emptiness of the exercise. Out of nowhere, the lessons of family and respect for disability find themselves grafted to this flimsiest of low-tech frameworks--special effects that are so amateurish and poorly implemented they don't so much remind of Tron as replicate Tron bit-for-bit twenty-one years after the fact. The narrative of the film, such as it is, reveals itself to be a life-support system for hyperactive incompetence, and for a series of stupid cameos that are at least preferable to Sylvester Stallone as something called The Toymaker.

Juni (Daryl Sabara) has quit the OSS kid spy agency to pursue a career in private investigation. A few minutes of nothing much passes, then Juni is pulled back into the life of spookdom by operatives Mike Judge and Salma Hayek to rescue his sister Carmen (Alexa Vega), who's been trapped in an interactive 3-D video game called "Game Over" by the mysterious Toymaker. Once in the game himself, Juni calls on his paraplegic grandfather (Ricardo Montalban, making a joke about Corinthian leather that is as dedicatedly unfunny as anything else in the film) to aid in his quest, gifting grandpa with virtual legs that he will be predictably loathe to give up. Something about forgiveness crops up towards the end, but getting there includes suffering the genuinely sadistic spectacle of watching Stallone play off himself cloned three times as differently-skewed aspects of his personality: the hippie, the professor, and...the Prussian general, I guess.

Though I'm a fan of Rodriguez and his "rebel without a crew" attitude towards guerrilla filmmaking, Spy Kids 3 demonstrates that few are immune to the corrosive effect that technology can have on story, character, and sense. The 3-D effects aren't any better than William Castle's experiments with the same, the end result looking a lot like "SCTV"'s old 3-D Theater sketch, with actors lunging at the screen and throwing garbage at the camera. Worse, it doesn't feel like the F/X are integrated or justified by the film at any point, making it an ugly, distracting thing that washes everything in a vomitous yellow-green while the actors cavort around on virtual stages with virtual props. Watching Spy Kids 3 is a great deal like watching toddlers play imagination games for hours and, more to the point, watching Daryl Sabara strutting around and, horror of horrors, improvising. He's the star of the show, occupying a good 90% of the running time with his wooden boggling, while everyone else (Antonio Banderas, Alan Cumming, Tony Shalhoub, Steve Buscemi, Cheech Marin, on and on) pops in for a couple of lines (if that) before vanishing again into the ether. In a nutshell, Spy Kids 3 is just dreadful; the fatigue I'm starting to feel, by this time of the summer, probably has something to do with my having written variations of these words what seems like a hundred times already. Originally published: July 25, 2003.