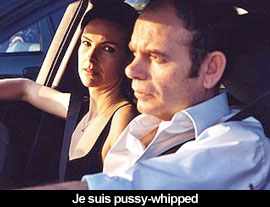 by Bill Chambers SPOILER WARNING IN EFFECT. Red Lights (Feux rouges), the latest from the increasingly venerable Cédric Khan, joins this year's growing crop of ephemeral auteur flicks. Takeshi Kitano's Zatoichi, Michael Mann's Collateral, Alexander Payne's Sideways--there's a prosaic quality that undermines the resonance of these pictures, even though each is uniquely a product of its director. Red Lights, about a marriage spiralling down the drain, about a guy chasing his tail, about the symmetry that always seems to assert itself in chaotic situations, opens with a montage of roundabouts and other circle-based imagery. Hell, it's called Red Lights, and there probably isn't another film from 2004 that so compels you to yell, "Stop!" at its unheeding protagonist. Khan is the masticating mama bird to our tractable hatchlings, and the only reason that Red Lights hasn't caught on like the similarly pre-chewed Million Dollar Baby is because it's not awash in sentiment. At least not until the problematic finale.

Evocative of Laurent Cantet's sensational Time Out in its humanistic lack of glamour and Catherine Breillat's Fat Girl in its manifest dread (those two films the finest examples of a subversive genre movement that has been brewing in French cinema for the past few years) while presenting a throwback to the conventional view--exploited in many a Gallic Deliverance since 1970's And Soon the Darkness--of rural France as analogous to America's backwater towns, Red Lights is, if you haven't guessed it, a thriller, one in which a distant middle-aged couple embarks on the road trip from Hell. The movie begins a little like Open Water, come to think of it, with the sourpussed Antoine (Jean-Pierre Darroussin) e-mailing his self-sufficient wife Hélène (Carole Bouquet) in a vain attempt to arouse enthusiasm from her for their weekend excursion to pick up the kids at summer camp. Perhaps in response to the implicitly male properties of technology (why is anything invented except to fight wars more efficiently?), we're now seeing a spate of movies that find men emasculated by cell phones and other modern conveniences--hoisted on their own petard, as it were.*

Once they're in transit a power-struggle begins. Antoine's only recourse is to drink, and his not-so-surreptitious sips at rest stops--which transform him into the fool he suspects she thinks he is--eventually drive "judgmental" Hélène from the car. However mutinous his overtures, a note left on the windshield saying she'll take the train proves that Hélène has Antoine on a short leash, for he immediately chases after her. Along the way, he encounters a literal roadblock alerting him to the threat of a fugitive who may or may not be the hitchhiker (Vincent Deniard) with a suspiciously concealed hand Antoine picks up when his wife doesn't show at the station.

You're tempted to laud Red Lights on the basis of Antoine being no less henpecked by his new passenger, as this levels the misogynistic imbalance in the dynamic between the central marrieds. (Khan superficialized Hélène's bitterness at the outset by casting former Chanel model Bouquet for her natural chill.) But an ironic twist indiscriminately redefines the picture in terms of the rape-revenge cycle: It's one thing to redeem Antoine, Straw Dogs-style, through an extreme, unwittingly chivalrous act of self-preservation, it's another to propose rape as the ultimate in couples therapy. I'm reminded of the glib conclusion to John Cassavetes's otherwise irreproachable A Woman Under the Influence, which equates Gena Rowlands with a record player that just needs a good swat whenever it gets stuck in a groove; not only do Antoine and Hélène reconcile as a result of her sexual assault, but there is also the loaded suggestion that she's a more luminous individual because of it. (Certainly Bouquet is photographed better with her head bandaged.) The film's pat psychology, then, does reach a nadir--and by that point, it's too late to yell stop.-Bill Chambers

*It's like that speech at the beginning of Roger Dodger: "...10 or 15 generations from now, men will be reduced to servitude. Technology and evolution will have combined to exclude sperm from procreation and our final destiny will be to lift couches, and wait for that day when telepathy overcomes gravity and our gender's last remaining utility is lost forever." return