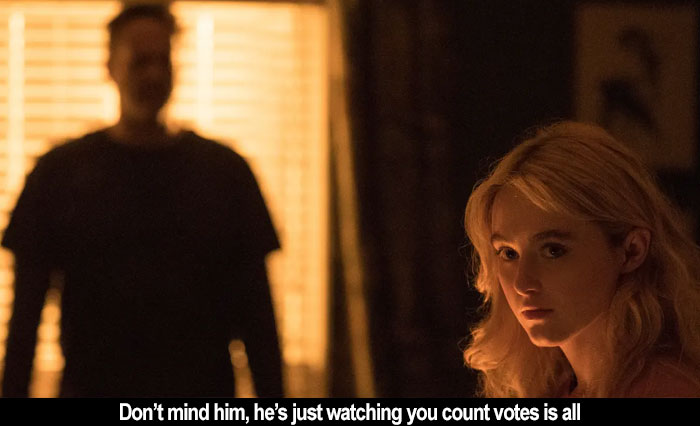 Please take every precaution if you insist on risking your health and that of others to see Freaky in a theatre. Wear a mask (over the nose, too, sport), practise social distancing, and don't be a dick.

by Walter Chaw "You've gone strange on me," Ava (Tuppence Middleton) says to her boyfriend Colin (Christopher Abbott) one morning when he, frisky in the kitchen, reacts to her rejection of his advances with an expression that's impossible to read. Colin has gone strange. He really isn't himself. Ava is the daughter of a wealthy and powerful man, John Parse (Sean Bean), who has earned wealthy and powerful enemies, and though he's surrounded himself with all of the things wealth can buy, including a reasonable level of separation from the rabble, he's vulnerable to the mistakes he's made as the bad father he knows himself to be. I appreciate that his name derives from a word meaning "parts" or, colloquially, a deconstruction of a whole into the small, individual components of which it is composed. Brandon Cronenberg's Possessor has both nothing and everything to do with Ava and John and Colin; it is a multitude I haven't been able to shake for days, and so I watched Possessor a second time to try to exorcise it from me. I don't think it worked. Time will tell. Possessor is a science-fiction film the way Eternal Sunshine of the Spotless Mind is a science-fiction film, and a horror movie the way Philip Kaufman's Invasion of the Body Snatchers is a horror movie, but what it most resembles is Kathryn Bigelow's nightmare chimera of the two, Strange Days. All of these movies make you sick (heartsick, soulsick, sick-sick), but Possessor has about it the massive, impersonal nihilism of Philip K. Dick. We are cogs in a machine, and the machine is broken. But also it never worked in the first place. The picture is a true fable of our deconstruction.

Tasya (Andrea Riseborough) works for Girder (Jennifer Jason Leigh) doing terrible things that Tasya can't always quite shake. Girder spends a lot of time with Tasya following her latest assignment asking her to pick out items from a box and identify them as hers or as interlopers. It reminds of the Tibetan ritual of discovering the next Dalai Lama by asking him to single out the former's belongings. So Tasya picks her grandfather's pipe--she smells it and closes her eyes and remembers him. There will be a time when I can no longer recall that which means the most to me. Seventeen years after my father's death, I no longer remember the sound of his laughter. If my sister doesn't, and if my mother dies of the cancer that is devouring her, who will be left who does? Is my memory of the things I treasure the aspect of myself by which I define myself? It's not just the memory, right, but the sensation that comes with the experience of it, too. I made my dad laugh so hard one Christmas that my in-laws commented on it when he died, how nice it was that we had that moment before he was gone. But said moment has faded, and my in-laws are gone now, too. Another five, ten, twenty, certainly not more than thirty years on and all of it will be gone and I will be someone completely different for its loss. Is memory the anchor that keeps me tethered to an identity bobbing there on the surface of an ocean of time? Possessor isn't about Tasya and Girder in the same way it isn't about Ava and Colin and John; rather, it's about how none of them are themselves, at least not consistently or for long.

Tasya's commitment to her terrible work has ruined her personal relationships. In one remarkable sequence, she rehearses all the ways she can say she's hungry in preparation for a dinner visit with her estranged husband Michael (Rossif Sutherland) and their son Ira (Gage Graham-Arbuthnot). She seduces Michael that night after dinner, and we see her accept his penetration of her with disinterest until she realizes something and pantomimes hunger. I think it occurs to her that she has forgotten how to be hungry. The job that she does is "possessing" other people to force them to commit atrocities. Then she shoots "herself" in the head to return to her Tasya body. She wasn't able to do it on her most recent job, however--shoot herself, I mean. It's not clear whether this is because Tasya doesn't want to kill herself, or because the person she possessed resisted this foreign impulse to end her existence. It is in some sense an affirmation of life, and it is the thing Girder wants to be sure Tasya hasn't corrupted herself with. Girder doesn't want Tasya to remember what it is to experience human impulses because human impulses are by their nature unpredictable. Possessor isn't romantic about this notion; it's not a film about how the human spirit is a mysterious thing that can't be manipulated or machine-replicated. Instead, it's a film about how humans are animals exclusively interested in self-preservation, and how the instruments we've invented--from the wheel to this device in Possessor that allows us to upload ourselves into someone else for a while--are projections of a selfish gene that, left long enough on the primordial stove, reduces down to violent competition for sexual access.

Tasya possesses Colin, and the first thing Tasya wants to do is make Colin fuck Ava. That's not part of the mission, except it's always the only mission. When Colin fucks Ava, Cronenberg shows Tasya's Colin mask slip. Possessor is in many important ways a companion piece to Persona: spend too much time in the company of another and suddenly there's no substantive dividing line to separate the two of you. This Cronenberg is, like the other Cronenberg, his father, an insect anthropologist, and in addition to being a science-fiction and a horror, Possessor is a cold dissection of romance blooming between multiple intersecting pairs of shifting, amorphous dance partners. We make poetry of it, but it's just parts penetrating parts. (Explanation here of an early fucking scene intercut with shots of a knife plunging into flesh, in and out, in and...) A gruesome assassination later involves an oral fixation and then a punishment of the gaze of a powerful male--a rape and castration robbing him of the instrument of his oppression.

Romanticizing penetration and consumption would be alien to livestock. We're the only breed of livestock that doesn't know we're cattle, although we suspect it now and again. Much time is spent in the watching (and rewatching) of Possessor trying to figure out when someone is Tasya and when someone is not-Tasya. Cronenberg mocks this pursuit with a nightmare sequence two-thirds of the way through in which Colin puts on a grotesque, stretched, melted Tasya mask and replays scenes of atrocities we've already endured with him thus displayed. There's quite a bit of scholarship about masks in horror films and what they ironically reveal, like actors in a Noh play, about the trickster metaphors hidden behind them. What Possessor contributes to this conversation is the notion that whatever mask we wear, it only ever covers the immense grandeur of our brutal biological impulse. It doesn't matter, in other words, if Colin possesses Tasya or Tasya Colin, because we are all mere rutting apes just sophisticated enough to know the horror of our existence.

The killer in Christopher Landon's Freaky wears a mask, too. Like Possessor, this is a film about a transference of egos and the struggle at some point to reverse that transference at great existential cost. The parts of it that are a clear take on Heathers are great, while the parts of it that are a smirking riff on Scream are not, leaving the success of the high concept in the able hands of Vince Vaughn as the "Blissfield Butcher" swapping bodies with high-school loser Millie (Kathryn Newton) through the agency of a mystical Mayan sacrificial dagger. The utility of a dagger used in human sacrifices that swaps the priest for his prey is a head-scratcher, but at least it's not a magic fortune cookie this time around. I say that not because it's less offensive, but because this time the offense isn't against my specific minority group. That's how they get us, I suppose. If you can't win, hope they go for someone else next time. Anyhow, if Millie doesn't stab the Butcher with the dagger within 24 hours of having been stabbed by the dagger herself, the body-switch will be permanent and her hopes of losing her virginity to her sweet jock boyfriend will be super not what either of them had in mind.

I really liked a lot of Freaky. I like Vince Vaughn always and enjoyed his teen-girl burlesque, all of running with hands held up like a begging puppy and being offended by graffiti Millie discovers in the boy's bathroom suggesting she wouldn't be above granting the occasional hummer. I liked, too, a moment lifted from Spider-Man: Into the Spider-Verse where two close relatives separated by a physical barrier mutually confess things they aren't able to face-to-face. Freaky has stuff to say about grief, loneliness, even bullying. When Millie, possessed by the Butcher, goes the full Olivia Newton-John-at-the-end-of-Grease upon her return post-swap to the violent hormone swamp of high school, Landon scores it with Livingston and Evans's "Que Sera, Sera" as sung by The Chordettes. This is a callback, of course, to the Syd Straw version used in Michael Lehmann and Daniel Waters's timeless treatise on high school, Heathers, and hints at a more sophisticated kind of satire that Freaky, ultimately, is not, though I did appreciate the moment of self-knowledge.

Other moments of self-knowledge I didn't appreciate so much, such as a bit where the gay best friend, Joshua (Misha Osherovich), remarks to the Black best friend, Nyla (Celeste O'Connor), that since they appear to be in a slasher movie, they have zero chance of survival. This sort of metatextual crack lost its shine twenty years ago. Still, the kills are good, the nastiness of high school (a trio of football bros threaten a chain rape of our hero/Butcher before meeting their just ends) comes through largely unleavened, and if the actions of our Scoobies don't entirely cohere (I mean, Nyla gets cut by the knife as well--I thought that meant she would be swapping bodies at some point), it all breezes through with a pleasant familiarity. It's the Rabbit Hole to Possessor's Antichrist is what I'm trying to say. In a non-pandemic world, it would've been a sleeper hit. As it is, it's a fascinating footnote to our era of assumed identities and finding out that our next-door neighbour is maybe not who we thought they were. Maybe they'll kill us, or maybe we'll kill them first.