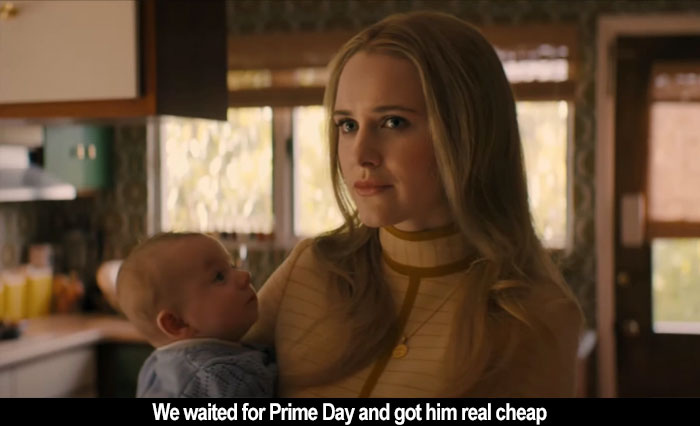 by Walter Chaw She's talking to a stranger about her miscarriages and how her desire for a child burned a little more to ash with each of them. The embers were cold and black until one day, her husband brought home a baby and told her it was hers. I think she's surprised how quickly something kindled inside of her. In many ways, her story is the story of how things you thought were dead in you can surprise you with their life. She tells the stranger that the baby laughs whenever she sings a particular song to it, him, in a particular way. She gives a demonstration. She doesn't know where her husband is now and the stranger doesn't either, of course. And then we're outside the diner where she's sitting, the kind designed to look like an old Airstream trailer. Hell, maybe it is an old Airstream, but anyway, the rounded edges of it dissolve into the curved underside of a bridge right at the same time the first notes of the song she sings for "her" baby fill the soundstage like it was conjured from some hopeful place. Like some other miracle.

The woman is Jean (Rachel Brosnahan, who also produced the film), and the stranger is Cal (Arinzé Kene). They're forced together by whatever criminal circumstances have made her husband, Eddie (Bill Heck), disappear. Cal works for Eddie, or with Eddie, or has been hired by Eddie's friends or business partners to take care of Jean. More details become clear as Julia Hart's I'm Your Woman unfolds, but the movie's not about that. Instead, it's about how women navigate a world dominated by brutal men, learn to be self-sufficient, and come to foreground themselves as the heroes of their own stories and not as the catalysts for some tired masculine storyline. It's a lot like Hart's Fast Color in that sense. Cal is the hero for a while, and I'm Your Woman seems briefly familiar. He takes charge of Jean's first night away, even teaches her a trick to soothe a crying baby. She asks him if he has children of his own and he says "no." That's strange, because we meet a child later who appears to be Cal's. Cal is telling the truth, though, or at least a literal version of the truth. There are lots of truths. It doesn't matter. Before long, Cal isn't the hero anymore.

My favourite song by Shawn Colvin is called "Trouble." In it, there's a lyric that goes, "If you need someone to walk with in the dark/well, I'm your man." When Cal stops being Jean's hero, he leaves her with his wife, Teri (Marsha Stephanie-Blake). Jean doesn't know it, but they share a strange history--though it's not so strange when you consider that the story of women is often tangled up with the inadequate men with whom their lives intersect. In a nightclub sequence that is an instant classic in a genre (crime/thriller) full of classic nightclub sequences, Jean receives a warning from a man to be careful of Teri. Men give these warnings about women who intimidate them--the ones who risk death to laugh at them. I'm Your Woman is thick with these small, throwaway moments, each underscoring the film's central thesis that the world for women is endless night and its attendant sorrows, but leavened now and then by the surprising confederacy of the sympathetically-exploited. Jean and Teri emerge as agents of their own outcomes. I love a bit in the backseat of a car where Jean, who makes terrible eggs and has never been on her own, discovers that the little knit bootie she keeps as a totem is gone, replaced by a gun and the will to use it.

I'm Your Woman is a period piece set sometime in the Seventies that evokes the best films from that spectacular period in movie history. Its score reminds of Michael Small's dissonant, expansive voids from The Parallax View and of David Shire's circular piano frustrations in The Conversation. In mood, there is a sense throughout that Jean is a cog--and not even an important one--in an inscrutable, insensate machine. We never really know what it is that Eddie does ("He's a thief!" Jean declares, only to be corrected later that he's "a killer, always has been"), who he does it for, or even what exactly Jean is running away from, except that she's running away from all of it and, when she can't get away, she's fighting to be free of it. The difference between I'm Your Woman and the films it most resembles is that stuff like Klute, The Parallax View, The Conversation, and Night Moves are about men trying to find The Answer, whereas I'm Your Woman is about a woman who knows The Answer and wants it to leave her alone. The heroes of 1970s cinema don't know they're in a horror movie until the monster eats them. Jean knows she's in a horror movie as soon as her husband comes home with someone else's baby.

Consider the time Hart spends gazing at her actors' faces, the patience she affords them to nestle into these roles. There's a moment where kindly neighbour Evelyn (Marceline Hugot) pays Jean an unexpected visit and, after a long, awkward exchange, remembers she's brought flowers, and... I don't know how to describe her awkwardness, her shyness, her pride, all of it conveyed in a single pregnant movement impossible without Hart's decision to let Hugot play it out from beginning to end. When Jean begins to suspect that Evelyn is maybe not who she presents herself to be, we're told this may be so because she's in league with the bad guys, or because Evelyn is lonesome and getting older and things like social interaction are for her as precious as they are increasingly difficult. Hart's attention to detail tells us who these people are by the way they hold babies or don't. To a one, her characters have thought progressions; not even a waiter with a couple of lines at the end is merely a narrative device. For however dark things get, Hart's work is hopeful. Her worlds are alive with hidden communities held together by empathy and shared trauma, and it's those very qualities of empathy and hope with which she infuses her pictures.

Exquisitely scripted (with Jordan Horowitz), I'm Your Woman is like a lost Alan Pakula film--the honorary fourth entry in his paranoia trilogy, perhaps, and the only one that speaks to a genuine possibility for the world not as it is, but as it could be, once we burn everything down and start over. Jean murders the past in I'm Your Woman, and the ecstasy of her defiance of The Way Things Are is galvanizing. I love this movie in the same way I love Hart's previous film, Fast Color: for its raising of minority voices in a chorus so pure it might indeed be the lighting of such a candle that, by some god's grace, shall never be put out. A crime drama not unlike The Friends of Eddie Coyle, I'm Your Woman reconstitutes the oppressive feeling of paranoia and societal decay into a fable of the ties that bind us rather than the nihilism of standing up against a poisoned system. If this is a marker for the way forward, even if it's just taking our simmering national temperature, it's evidence that there is still more good in this country than bad. And that although it's in our nature to be quiet (and we've been quiet for a while), we can roar when we find our voice. I hope we find it in time.