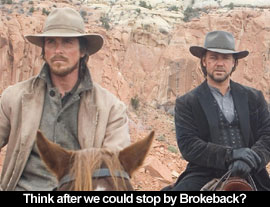 by Walter Chaw The distance--chronologically, ideologically--between the release of James Mangold's 3:10 to Yuma and Andrew Dominick's looming The Assassination of Jesse James by the Coward Robert Ford strikes me as identical to the space that connects Peckinpah's The Wild Bunch with Peter Fonda's The Hired Hand. The exhaustion in our popular culture feels the same; the nihilism feels the same; the fatalism with which a lot of us look at our political prospects (the incumbents are bums, the insurgents are morons) feels the same. You compare Peckinpah's criminal heroes, burnt by the sun into animated saddle bags, motivated by gold and orgies to go to their doom in blasted, godless places south of some metaphorical border, to Fonda's retinue of burnt-out, disillusioned, disenfranchised yippies and graceless lugs, and you're able to crystallize somehow a picture of how, even in the space of a single administration, the coarse diving bell of our basest natures is collapsed by too much terrible knowledge. (Compare Fonda in his own film to Fonda's wonderful cameo in this one--the dream is dead, indeed.) You can only fall back on how natural it is to be a bastard for so long before philosophical reflection rears its ugly head. The internal progression of Arthur Penn's Bonnie & Clyde provides the template of this motion all by itself: The midpoint of that film, as Bonnie visits her mother on a soft-focus, sepia-smeared dirt farm, represents the generational gulf, sure, but also the turning point between the innocent bloodshed of that picture's celebratory first half and the strive towards domestic "normalcy" of its doomed second. I wonder if what lingers (and what initially so offended) about Bonnie & Clyde wasn't the gore and the sex but instead the suggestion that the way things are, just the act of growing old murders the spirit.

In that sense, 3:10 to Yuma reflects a thread in Mangold's work of how the fancies of youth are steamrolled by the encroachment of age (his best film, Cop Land, likewise deals with the death of innocence and resurrection through fire of one broken-down man via a series of macho encounters and displacements of masculine archetypes), doing so here by having righteous outlaw Ben Wade (Russell Crowe) function as the character arc for not only hero rancher Dan Evans (Christian Bale) and his transformation from milquetoast to stud but also Evans' son's William (Logan Lerman) and his perception of the same. At the end of the day, it's not certain that Evans is Superman (Batman?), yet it's for damn certain that William sees him as such, making 3:10 to Yuma the story of how children, we the innocents, mythologize the poor, broken, painfully human flesh of our fathers. It has more in common with The Man Who Shot Liberty Valance than with its own 1957 namesake (or the Elmore Leonard short story that inspired it): It's this glimpse, however sly, at how we tend to romanticize bad men at the expense of good men--and how far from the meek inheriting the Earth we've come when the only thing left that matters is pomp and circumstance. Even its basal epilogue--the one part of the film that feels anything like equivocal bullshit--carries with it the faint remembrance that it was Nixon who beat McGovern in the war of images, not the other way around. At the end of the day, the ones who know best how to manipulate public perception are the ones wearing the black hats.

To that end, as revised by Mangold's picture, mad-dog stagecoach bandit Wade is an aesthete: sketching wildlife and moments of poignant repose, quoting Proverbs (easily the most beautiful book of the Bible, no?), remembering lost sea captain's daughters with eyes like the ocean. After he spends an afternoon with a saloon girl (Vinessa Shaw), he winnows his afterglow into a charcoal nude. He is every bit the warrior/poet--the image of manhood that Evans has failed to embody, having been too busy trying to carve out a living and keep his children alive. Wade is the catalyst for young William's maturation; our introduction to the child is through William's candle-lit rendezvous reading a pulper about Wade's outlaw existence, leading to a late-act decision that has Wade agreeing in action to be a player in the father's Passion Play.

That Wade and Evans are holed up in the bridal suite of a fleabag town for much of a fateful afternoon suggests to me that the two are the "parents" of this child's evolution into a man, armed and perhaps armour-clad in the belief that his father was a good man and worth emulating after all. Moreover, Evans' plight throughout 3:10 to Yuma is that he is essentially incapable of paying the rent. The best speech in a film full of well-delivered moments (the actors smooth over the majority of weaknesses in the script) has him explaining to his wife (Gretchen Mol) how he's tired of the way his kids look at him and the way she doesn't. There are so few films that portray the difficulty of making a simple living in these United States, with a family and mortgage shored up against a pile of ever-increasing debts, that the fact that 3:10 to Yuma dedicates its entire weight--and at least half of Evans' dialogue--to a man trying to be a man in the eyes of his family (allegory alert: Evans is also a crippled war veteran betrayed by his country's lack of financial and emotional support) by working hard for limited returns should be celebrated as a breakthrough. In this personal way, it's arguably a better political attack than a full-frontal assault on our broken state of affairs.

Putting aside the complexity of a full read for a moment, 3:10 to Yuma is an immanently enjoyable Western, packed to the brim with hoary archetypes and demonstrating a fairly uncompromising attitude towards its casualties. Wade's right-hand bogeyman Charlie Prince (Ben Foster) is amazing; there's a moment when Wade strides through the swinging doors of a saloon that's familiar in a pleasingly monumental way, but when Charlie walks through the same opening on the doors' backswing, the destabilizing of the iconography is pure delight. He's all nervous, eccentric tics, and bad teeth (echoes of Will Patton's too-earnest aide-de-camp to Gene Hackman's senator in No Way Out). It's The Wild Bunch again, meeting the Wild Bunch's same fate at the end of another bracing My Lai: the lawless idols amuck in a foreplay-to-the-climax where it's carefully established that the Law is cowardly, corrupt, and soon slaughtered besides--another flattening of society and a rebuilding along tremulous, psychotic lines. Since we scour the art and writing of sociopaths post-rampage for clues to their dysfunction, shouldn't it follow that we dissect the popular culture a society produces to expose the sources of a society's psychosis?

It's pithy to me that our cinematic climate these first, devastated years of the new millennium seems analogous to the tinderbox of 1968's, and that this 3:10 to Yuma is espousing a too-familiar brand of senseless, inhuman, neo-conservative, corporate-driven libertarianism. In this wasteland, the Duke is Lyndon Johnson again. If Wade is an essay on the all-American tradition of venerating outlaws and Evans his unglamorous doppelgänger, plowing away on his pathetic plot of land as the railroad draws its crosshairs on his broken back, then 3:10 to Yuma isn't a throwback to the Shane western as it might initially appear, but rather every bit the contemporary anti-authoritarian tract. Wade's image isn't usurped but actually augmented by Wade's ability to use his reputation to bolster Evans' heroism in the eyes of Evans' son. The subject of tabloid ("pulp") treatments--and it's no accident that a supporting character is dubbed "Sam Fuller"--Wade is the canniest scriptor of his own legend. The last ten minutes of the picture are incomprehensible without this filter, allowing for Wade as the wellspring for Western tall tales and the seeds of grassroots mythology.

The picture's supporting cast and locations (the best a whistlestop along the way of the budding intercontinental railroad that Mangold weighs down with Guantanamo/Abu Ghraib references) are a pictorial gloss of Old West clichés--not weak for that, but an example of a self-conscious picture's identity centred around the idea of clichés talking to clichés in clichéd situations and clichéd environments. The choice is to do it without much irony as here, or so steeped in the syrup of itself that it's almost transcendental expressionism (as in The Assassination of Jesse James...). 3:10 to Yuma in this light becomes a map of a journey towards cynicism--a recasting of Shane where the equivalent of the hero riding out of town is the hero getting canonized by the villain before getting martyred by the same. The lone reward for crippled war heroes is to die at the hands of bad guys who've pre-scripted the heroes' hagiographies with their own brand of rakish, sexy evil from ideological birth to symbol-heavy extinction. It's through the auspices of their Bedouin rebellion alone that nuclear domesticity gains any romance. The picture might be a blueprint for our scripted wars, the image campaign that paints our enemies so severely that we duck and cover ever more tightly into an Eisenhower-era fetal ball--and it scarily implies that the bad guys now were playing along all along. Originally published: September 7, 2007.