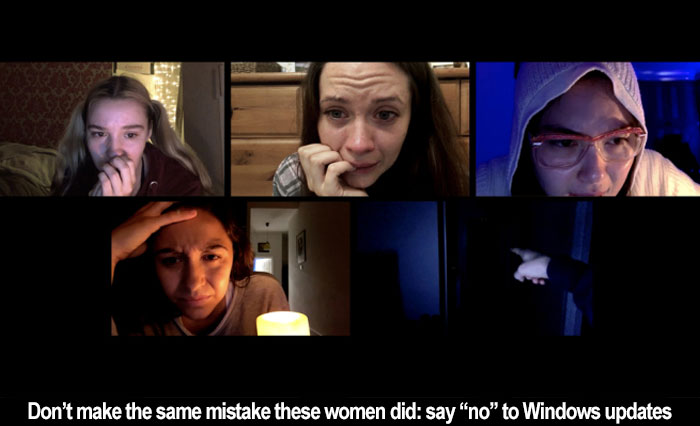 by Walter Chaw I've spoken in front of audiences large and intimate. I've hosted discussions in opera houses, stadiums, and gymnasiums, as well as seminars in classrooms and private homes. When the pandemic hit and I suddenly found whatever teaching or speaking opportunities I was still being offered relegated to "Zoom" meetings, for the first time speaking in public as a professional, I knew anxiety and fear. There's something about it. Is it that everyone is a foot away from your face? I hosted a discussion group recently that had over 100 attendees. On Zoom, that means there are pages and pages of participants you can scroll through as you're talking, and it means that every time someone so much as moves, you're distracted by it. Thrown. Unsettled. Of all the things I didn't anticipate about this odd period in our time together, it's this new horror of engagement. Zoom, the fractured screen it represents, reminds me of that scene in Playtime where M. Hulot visits an old war buddy in an apartment building where an entire wall is made of glass. It's uncanny, wrong, unnatural in a constructed way. It feels like a vivarium, like that old "Twilight Zone" where an astronaut realizes when a wall falls away in his house that he's on display in an alien zoo. I'm afraid to look, because I see more than the subject can see. I'm afraid because I know they see more than I can see, too. I'm afraid because, in these things, I'm having an intimate, face-to-face conversation with dozens of people I can't all see, much less respond to. Zoom is a vampire, and I am drained.

Host finds six friends gathered virtually at the behest of Haley (Haley Bishop) to engage in a socially-distanced séance. One, Jemma (Jemma Moore), is a skeptic and a pain in the ass about it. Another, Caroline (Caroline Ward), is terrified and not afraid to show it. The others, Radina (Radina Drandova), Emma (Emma Louise Webb), and Teddy (Edward Linard), are various shades in between. For her part, Haley seems deadly, intently serious in her desire to contact the dead. Director Rob Savage, co-writing with Jed Shepherd and Gemma Hurley, is smart enough not to dig very deeply into why. It doesn't matter why. What does matter is that Jemma makes the wrong kind of joke and earns the attention of something awful. Everyone thought the Internet was a good idea, and it was--until it wasn't. Giving outcasts a society was a bad idea, giving trolls a platform a sometimes-deadly one. Host is about those things, sure, but it's also about that first moment when something truly inexplicable happens, and it gave me the first full-body chill I've felt during a horror film since I was maybe fifteen years old.

Rob Savage made a short short film a couple of years ago called Salt. It's astonishing, doing more in its two minutes than most horror movies do at feature-length. Host, at fifty-six minutes, still isn't quite a feature film, but I'm not entirely certain I'd survive a two-hour Rob Savage joint. Host is not just brilliant, it's as good and as important, and in many of the same ways/for the same reasons, as The Blair Witch Project. It's destined to be imitated, to experience a backlash and then a critical resurgence, to be reconsidered at some point down the line as not just a nifty little lo-fi shocker, but indeed as a cultural mile-marker in our long, downward slide. It's a film that couldn't have been made at any other time, that couldn't have been as effective in another medium, and could not be more concise in its excavation of an ephemeral--but entirely of the moment--technology. In the way that Zoom now defines our normal, Host immortalizes it and, by extension, suspends our eternal present in the amber of this last, best way we can gather--we think safely--in groups. In this way, it's a science-fiction film of our documentary present: In our dystopian wasteland, we kill our friends, however we engage with them as friends.

Like Leigh Whannel's The Invisible Man, Host is about an unseen killer hunting us in isolation. It skips the horror-film convention of idiots wandering off by themselves to suffer unimaginable terror by separating the herd from the start. We are instantly recognizable in this movie. We are all vulnerable, targeted, stalked, and we reach across the void for a hand to hold as we drift apart in our separate, declining orbits. Host highlights how an Internet connection is not a literal connection. Your friends can't help you as you're being murdered--but they can watch. The title refers to the host of a chatroom--which the chat's participants first think is a possible quack spirit medium named Seylan (Seylan Baxter), but is actually some angry spirit or demonic entity using the mask of anonymity as an open invitation to wreak havoc--and the host of a parasite. The idea of a loved one's torment broadcast for the purposes of torture is common, of course, but what if the means of the broadcast is also the cause of the torment? In that way, Host ties itself to The Ring: a film about a specific technology as the carrier of disease unto dying, and so insightful about the conversation that it deserves the same sort of intimate deconstruction. Like The Ring, there's no explanation for the contamination; whatever lurks in Host was just born that way. I'm tempted to wrap it all up in a bow, to explain that we are the host and our parasite is... Ah, but it's not that simple. Host is immensely clever: a labyrinth haunted by the ghosts of a monster and a maiden fair and an erstwhile hero, although they keep switching identities and threads, and maybe the bad guy is the labyrinth, and maybe we shouldn't have fucking built it in the first place.