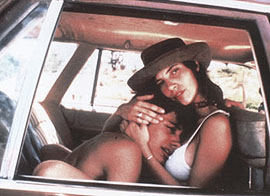 by Walter Chaw In the midst of their own kind of "Nouvelle vague," the Mexican cinema seems invested in the creation of unmannered, free-floating humanist pieces that follow disenfranchised protagonists through the grim straits of their day to day. Alfonso Cuarón's Y tu mamá también takes on the dimensions of a Truffaut film, or a hyper-sexualized Antoine Doniel film, perhaps--one that fits between the child of The 400 Blows and the eighteen-year-old of Antoine et Colette. Structurally, it most resembles another Truffaut, Jules et Jim, and while Y tu mamá también is also ostensibly about a woman whose freedom of spirit functions as a catalyst for the maturation of two young men (and while it has its share of non-sequitur conversations and undercurrents of political exposition), it takes a far more visceral tactic to its tale.

Julio (Gael García Bernal) and Tenoch's (Diego Luna) girlfriends go on a tour of Italy, leaving the randy duo to masturbate on diving boards, brag about imaginary conquests, and talk an older cousin, Luisa (Maribel Verdú), into accompanying them on a road trip to a fictitious beach called "Heaven's Mouth." Inspired by her oafish husband's myriad infidelities, Luisa takes the boys under her wing, offering the pair tutelage indirectly in the ephemeral nature of joy and directly in the intricacies of pleasing a woman. Cuarón composes his narrative as explicit sensuality sharing time with explicit sex talk, set against images of heavily-armed soldiers conducting roadblocks. It's not subtle, but Y tu mamá también's aggressive bawdiness evokes Mexico's baked earthiness in a way that a more delicate poetry would be unable to carry off. Yet it is, at times, elegant just the same. Cuarón's film understands the hormonal fever dream of late adolescence and its attendant gestalt-narrowing self-importance, finding the existential paradox of man existing in an unnatural state in the midst of an impossibly beautiful landscape.

With a sporadic voice-over that reminds a little of that found in Jean-Luc Godard's 1964 film Bande à part (part destiny, part ironic commentary), Y tu mamá también makes the mistake of wanting to be both self-conscious and naturalistic. When the fate of a pack of pigs roaming a bucolic beach is described, ending in a distant bout of trichinosis for its future butchers, the seams holding the vérité to the philosophy begin to show here and elsewhere.

Still, what works in Y tu mamá también works extremely well. Its eroticism is furious, capturing the awkward, animal neediness of passion and the often-embarrassing by-products of the same. There is an intimacy to the triangle at the heart of the picture that suggests a manifestation of the recollected ménage à trois from Bergman's Persona, and Verdú's difficult performance carries a weight of pathos that is unexpected and ultimately honoured by Cuarón's script (written with brother Carlos). Although Y tu mamá también outstays its welcome, ultimately, becoming increasingly arch and uncomfortable with itself, it's a hallmark film in an increasingly important film industry, and definitely worth a look. Originally published: April 26, 2002.