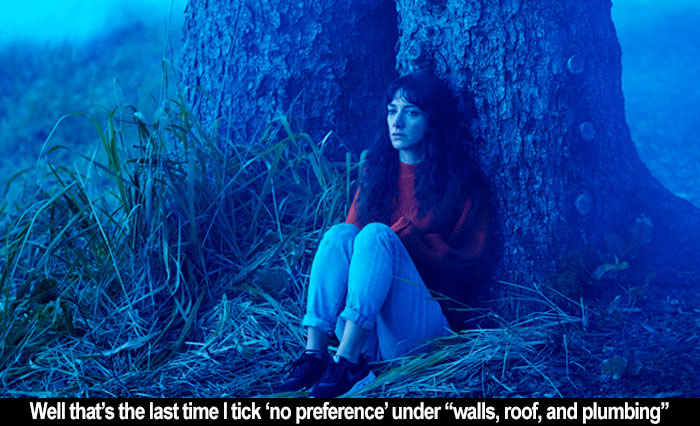 by Walter Chaw The good version of The Rental, Dave Franco's directorial debut (which he co-wrote with Joe Swanberg), reminds a lot of Paul Etheredge-Ouzts's exceptional Hellbent in how it addresses prejudice through the application of genre conventions. The bad version of The Rental is the one that isn't about any of that and is maybe a little bit racist in that well-intended way people who would be horrified to be thought of as racist are a little bit racist. The good version finds a quartet of friends, lovers, and brothers away for a weekend of privileged R&R at an extravagant Airbnb to celebrate the closing of some big deal that will make them richer with more time and disposable income than they already have. The brothers are unctuous Charlie (Dan Stevens) and pugnacious Josh (Jeremy Allen White). Charlie is married to irritating Michelle (Alison Brie) and business partners with Iranian-American Mina (Sheila Vand), whose main character trait is that she is obviously Iranian-American. That part is from the bad version of The Rental. The good version finds them away on their weekend holiday, met at their rental destination by creepy good ol' boy Taylor (an exceptional Toby Huss), who has apparently rejected Mina's attempt to rent--only to go with the white applicant immediately.

She challenges Taylor's racism when he's showing them around. It's wonderful. Wonderful not because Mina has a long speech that shames Taylor and provides the audience a moment of cheaply-earned catharsis, but rather because Mina's white friends stand around with their thumbs up their ass, wishing Mina would stop making a fuss. This sequence is immediately recognizable for minorities with large groups of white friends. Being subjected to racism is never great, mind, but it's even worse when your allies shuffle around awkwardly, fail to meet your eyes, and pretend they didn't notice once it's over. The good version of The Rental is a story of what happens when the white allies don't trust the intuition of their minority friend, making the slasher flick of its final third a metaphor for how the world is on fire right now because of rich white men and the drug-addled white women who enable them. The only way to excuse the character sketches, after all, is to look at them as an extended metaphor.

The bad version of The Rental is the one where a minority is continuously referred to as smart and hard-working and this Asian woman is still cast as something of a seductress. Both of the brothers are given to talk about how brilliant Mina is--one in the course of denigrating himself ("She's too smart for me!"), the other as a drunken hot-tub come-on ("You're brilliant!"). When Mina separates herself from that situation, The Rental cuts to a long POV shot and some heavy-breathing, which introduces the idea that The Rental is a mumblecore The Osterman Weekend and further objectifies Mina at the same time. This is the kind of objectification, however, that good white people see as positive. Mina and Charlie's subsequent indiscretion is followed by the discovery of a hidden camera, a call to Taylor, and a series of unfortunate events. And then it's American Psycho, except the good guys are rich assholes and the bad guy is an anonymous "everyman" who represents...the gig economy? Airbnb landlords?

The Rental is Deliverance but confused. Four privileged folks venture into MAGAt country in pursuit of some leisure and come upon their primordial selves. Are their true colours exposed in the crucible of real experience? I don't know. The good version of it is certainly worthy of conversation, and there are moments where The Rental seems like it's got some provocative ideas, where it becomes tempting to give it the benefit of the doubt. But then there's the bad version of it that's more interesting for the fact of its implicit biases than for any exploration of the same. Sort of like that tree in Dagobah: whatever's in there is whatever you bring with you. I genuinely loved a lot of it. I wish, you know, maybe a woman or a person of colour had a louder voice in the room. Kind of like Mina at the beginning of the movie, telling her asshole buddies this whole thing was a bad idea.