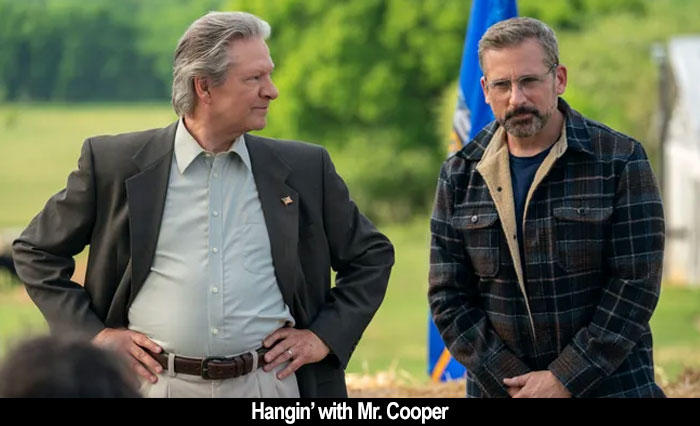 by Walter Chaw Jon Stewart's Irresistible hates you, absolutely loathes you. It can't believe it has to talk to you and so it's smug and dismissive, and then at the end of it all, it offers up three different but equally repugnant endings that give the viewer a variety of shit sandwiches to choose from, though you do have to pick one. As a metaphor for what's going on in the world right now, it's on-the-nose. As a movie, it's an assault more objectionable than any Lars von Trier or Michael Haneke miserabilist exercise, because it clothes itself in an affable sheaf of menial, liberal equivocation--but underneath it's this boiling, nihilistic condemnation of every single one of you fucking idiots who let it get so bad. It brings to mind nothing so much as George Sanders's suicide note expressing boredom with the very notion of you to the very last. Everything is terrible. The experiment is over. We failed. There's no hope. And Irresistible is precisely the kind of asshole who offers a utopian social solution he clearly thinks is a hopeless fantasy but pretends is advice given earnestly so you don't think he's the other kind of asshole who just complains about how stupid people are all the time. It's a film about the mortal tone-deafness of liberals that is itself mortally tone-deaf.

Irresistible is Ray Bradbury's "Mars is Heaven," where the Martians are the salt-of-the-earth backwoods flyover "real Americans" putting on a show for the arrogant coastal elites and then metaphorically murdering them in their sleep. See, it traffics in the worst stereotypes weaponized by both sides of our insurmountable socio-political divide: the "real" Americans are yokels, and the "yokels" are super-clever and should not be humiliated--or, in the parlance of Irresistible, "patronized." The reason undereducated good ol' boys vote for fascist dictators is because latte-drinking faux-liberal allies don't understand them. It's astonishing bullshit from a guy, Stewart, who for a while hosted the most prominent TV program to take the piss out of undereducated good ol' boys and their white nationalist representatives of choice. Think hard, though, about who Irresistible believes is the asshole when it uses Bob Seger and Glen Campbell to score scenes of noble ex-Marine Col. Jack Hastings (Chris Cooper) washing his work-rough hands in his barn and surveying the empty storefronts of his beloved Deerhaven or Deerholden or Rural Fuckburg, you get the idea. Because Irresistible thinks you're the asshole, it patronizes you from the first and then, when you're absolutely through with this piece-of-shit movie, it reveals that it's been in on the joke all along and manufactures an indefensible "twist" demonstrating how it's been holding all the aces from the start. Perhaps chief among the picture's many crimes is that it doesn't even play fair.

Col. Jack delivers a progressive rant in church that goes viral, leading Dem fixer Gary (Steve Carell) to come to hicktown to convince Jack to run as a "new" Democrat suddenly interested in poor people. His interest interests GOP fixer Faith (Rose Byrne) to throw the resources of the Grand Old Party behind incumbent Mayor Braun (Brent Sexton), resulting in the creation of SuperPACs that funnel millions into the town for which, because our system is built on graft, influence, and organized crime, there needs to be no real record. This is important because, at its heart, Irresistible is a heist movie where the unsophisticated yokels prove to be very sophisticated in their own way. Patronizing. There's even a scene in here where Jack's daughter Diana (Mackenzie Davis) tells Jack he's been served a burger and Bud every night at the local Hoffbrau, despite it being a German eatery, because he's being patronized. Jack then retorts that he doesn't even like hamburgers and Bud, so he's the one being patronizing. Let's not fight, you guys, it's Irresistible that's being patronizing. A lot of the alleged humour of the piece is this fish-out-of-water bullshit the Coens handled with one "Why do we eat here?!" line in Intolerable Cruelty. In Irresistible, the sub-Catskills riffs go on for what seems like forever. The timing is metronomic, lifeless, ancient. The comedy is so feeble it actually magnifies the bitterness of the piece instead of hiding or defusing it.

There's a disgusting romantic subplot, there are disgusting lead performances by Carell and Byrne as broad, divisive caricatures, and the script is so disdainful of itself that for key stretches, it has Gary and Faith yelling TRUTH at the 24-hour news cycle--truths like, "I lie all the time, you know I'm lying, see you later for beer." It's not brave or rebellious for noting the obvious, it's--in the words of Matt Zoller Seitz--a little bit punk for being such a fucking prick for shouting the obvious like it's not. Irresistible patronizes CNN and MSNBC and FOX with actors who look like news personalities in a way that suggests a certain false equivalence that all of it is fake news and then...and then you realize the movie wants to burn it all to the ground. All of it. It's aligned in that way with anarchists and also with the Republican Party, which has thrown itself behind a chaos agent because chaos, in the end, is what the most desperate people in this country have decided is the only way to ever see change. They're not wrong. That's the hell of it. And then there's that cascading tantrum of endings: you want this? Here it is. Or this? You want this? Is this what you want? Why don't you choke on it? How about this? Huh? You like that? Here it is. Fuck you. Fuck all of us, you fucking idiots. It's your fault. We're all going to die. But at least it's presented as a glib prestige picture, right? Slurp it up, folks, it's fucking irresistible.