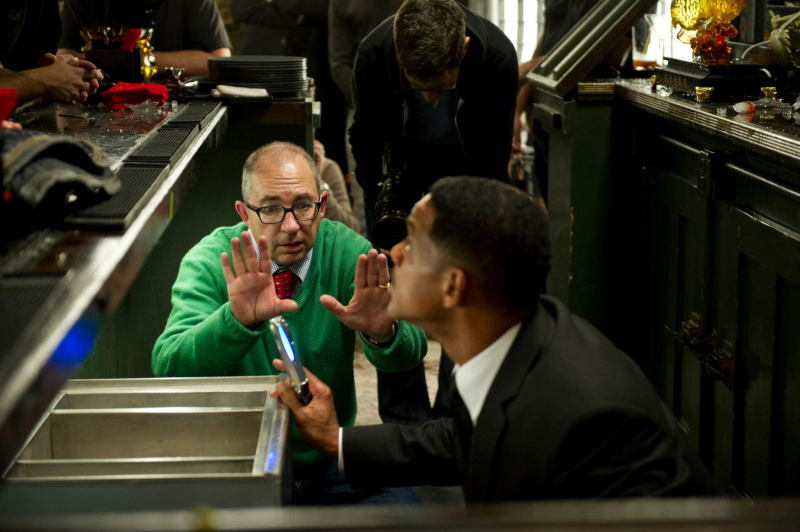 by Bill Chambers Barry Sonnenfeld is a renowned cinematographer and a director with more than a few blockbusters on his resume (The Addams Family, the original Men in Black trilogy), but the Sonnenfeld who's front and centre in his autobiographical Barry Sonnenfeld, Call Your Mother: Memoirs of a Neurotic Filmmaker is the raconteur who's honed his craft on talk shows with comic tales from his civilian life as the offspring of overbearing parents and husband of the beloved "Sweetie," many of which reach their final form here. Cinephiles may consequently find the book to be something of a disappointment compared to, say, fans of humorists like David Sedaris. While Sonnenfeld does touch on his experiences in filmmaking (including a stint in porn), he skips blithely over some milestones on his CV or remembers them for exceedingly idiosyncratic reasons that won't sate any conventional curiosity one might have about them. For example, Miller's Crossing, arguably the pinnacle of his three-movie collaboration with the Coen Brothers, is reduced to the production that climaxed with his wedding. On the other hand, there's value in Sonnenfeld's somewhat dumbfounded consideration of his unlikely journey up the Hollywood food chain, which shows that fate and, let's face it, white male privilege can play major roles in launching a film career. His utter lack of sentiment when it comes to his achievements makes for a tonic against the typical showbiz-dreamer's success story.

It is also a very, very funny book.

Sonnenfeld begins by quoting a character near and dear to his heart, Men in Black 3's Griffin the Arcanian, a "quantum mechanic" who can see all possible futures at once and understands innately how the countless decisions human beings make on a daily basis shape history. Sonnenfeld enjoys looking back on his life in these cause-and-effect terms and wryly speculates that he "would not be in front of a Lenovo ThinkPad typing this memoir at my desk in Telluride, staring at the Colorado blue sky, a brutally shaken Belvedere in a martini glass patiently waiting for my arrival on our upstairs deck" if he had opened a colour lab with his friend Terry in the 1970s. He is suitably mystified by how exquisite some of his choices turned out to be, given the lack of forethought that went into them. Seeking a mentor, for instance, he contacts street photographer Elliott Erwitt--and only Erwitt, despite admiring others in the field like Lee Friedlander, Garry Winogrand, and Robert Frank. It's significant because Erwitt turned out to be married at the time to the aforementioned Sweetie, Susan Ringo. Spoiler, I guess, though Sonnenfeld reveals this tidbit fairly early on. Sonnenfeld ingratiated himself with the couple but took Susan's side in their divorce. By that point, Erwitt already resented him for forging a career in feature films and started bitterly and somewhat homophobically referring to Sonnenfeld as "Susan's Hairdresser" in public. Eventually, Sonnenfeld was caught in the middle of a custody battle between Erwitt and Ringo.

For all that, Sonnenfeld doesn't depict Erwitt through a veil of contempt and still speaks highly of his work. They had a lot of fun travelling the globe making a proto-"Lifestyles of the Rich and Famous" together for HBO. Sonnenfeld's parents do not get off so easy. His mother, Kelly, was an art teacher who paradoxically smothered her son and expected him to be completely self-sufficient. Father Sonny, now in his nineties, was a weekend dad who routinely cheated on Kelly and struggled so much financially that he forced young "Ba" to bar mitzvah, then stole the money. (Everyone calls him Ba--which I presume sounds like "Bear" with the "r" dropped--except Will Smith, who calls him "Baz.") The Sonnenfeld clan consisted of Kelly, Sonny, only-child Barry, and sometimes "CM the CM," a.k.a. Cousin Mike the Child Molester, who openly took advantage of Barry, Barry's friends, and, at family gatherings, Barry's young relatives. CM the CM moved in to keep lonely Kelly company, and a great deal of the subtext, as well as the text, of the resentment Sonnenfeld harbours towards his mother and father is that they knowingly and selfishly put his welfare in jeopardy. In a desperate bid to rid himself of Cousin Mike's presence in his life, Sonnenfeld's childhood best friend set fire to his own apartment. Sonnenfeld himself suspects that his sciatica flare-ups are a manifestation of PTSD from his time in the company of CM the CM.

It's grim stuff. Yet Sonnenfeld is a portraitist with an ironic sense of humour some would call quintessentially Jewish, and he can't help but find the humanity and hilarity in the horrorshows that are Sonny and Kelly. Describing his father as someone incapable of resisting a bargain, he remembers Sonny buying a $400 pair of shoes for $6. The shoes were on sale, though, because one of them was sitting in a display window for the past four years, "receiving a daily dose of bleaching sunlight." "If the pair of loafers had been rock guitarists," Sonnenfeld writes, "we're talkin' Edgar Winters and Chuck Berry." Kelly's quirks are somewhat more directly traumatizing and include threatening suicide at the drop of a hat. Perhaps unforgivably, 5-year-old Barry was forced to talk Kelly out of killing herself.

Still, if anything, Sonnenfeld's a little too good at capturing Kelly's wounded quality. ("I'm decimated!" she frequently exclaims; he always corrects her.) A motif of Barry Sonnenfeld, Call Your Mother is that his mother will say, "You know I love you," to which Barry will reply, "Yes, Mom, I do." Sonnenfeld knows she was really asking if he loved her, but he refused to give her the satisfaction of reciprocating. When he's still doing it in adulthood, having definitively shifted the power dynamic between them by becoming rich and famous, it starts to feel like punching down. Success is the best revenge, as they say, although "they" probably aren't struggling to reconcile their parents' role as nurturers with the people who put their diminutive son in the path of a predator. (One with massive anger-management issues to boot.) Fuelling Barry Sonnenfeld, Call Your Mother, in part, is Sonnenfeld's outrage at their lack of contrition later in life. Both give him the sorry excuse that child molestation didn't have the same stigma back then that it does now. (I laughed incredulously, then laughed at Sonnenfeld's apoplexy.) Sonnenfeld himself is out of excuses for them; the book is him driving a stake through that relationship, though it ends on a note of wisdom that inches towards acceptance of who Sonny and Kelly were, if not forgiveness for what they did.

This probably isn't selling you on Barry Sonnenfeld, Call Your Mother, so trust me when I say there's far more to it than Oedipal angst. He wins bout after bout leg-wrestling celebrities. After years of comparing airline travel to suicide attempts, he's in an honest-to-goodness plane crash. He goes through something similarly harrowing while shooting a porno flick. (That chapter, which throws all caution to the wind (for better or worse), made his wife shake the bed with laughter, he notes in the afterword.) He becomes a high-paid escort's New York boyfriend. Have you ever known of anyone who lived in a geodesic dome? Now you do. And, of course, he works on some pretty high-profile movies. It's misleading to say the book overlooks that aspect of his life, but Sonnenfeld is seemingly unaware that Barry Sonnenfeld, Call Your Mother will primarily appeal to fans of his feature films, and, maybe as a result of not having grown up a movie buff (something he mentions a number of times), he not only cherry-picks an oddball assortment of titles to discuss in detail, but also evinces little interest in anything that happens or happened on set.

The exceptions are when he reflects on Penny Marshall's Big and Andrey Konchalovskiy's Tango & Cash, two films on which he was DP that found him clashing with the director. A replacement on the latter for his eventual Men in Black cinematographer Don Peterman, Sonnenfeld lasted a week until Donald E. Thorin replaced him. (In a rare but not isolated blunder, Sonnenfeld calls him "Donnie Thorn.") It was an eventful week. He was almost fired on Big and graciously offered to bow out in favour of someone who had better chemistry with Marshall, but mutual friend Danny DeVito vouched for Sonnenfeld and Big's producers persuaded her to keep him. Marshall and Konchalovskiy sound like complete assholes of different genera (passive and aggressive, respectively); it's easy to see, at least from Sonnenfeld's recollection, why both of their careers fizzled out after a promising start: the centre simply couldn't hold.

Of his own films, The Addams Family and Get Shorty receive the most attention. Part of what's frustrating about Sonnenfeld's selectivity is that he teases at conflicts that didn't come to fruition until the sequels, leaving us to extrapolate what they could be. Regarding the behind-the-scenes tumult on Men in Black 3, Sonnenfeld says at the beginning of Barry Sonnenfeld, Call Your Mother that he might write about it someday. I thought he was being a smart-aleck, bracing us for a humdinger of a chapter later on, but whatever caused him to describe it as a "profoundly painful experience" is only obliquely hinted at elsewhere in the book. Sonnenfeld tolerates producer Scott Rudin on The Addams Family because the mercurial Rudin's foibles remind him of Kelly's, but by the time he's made the mentioned-in-passing Addams Family Values, he's wishing death on Rudin to a complete stranger--Kramer vs. Kramer director Robert Benton--in a restaurant.

He can also be uniquely insightful in maddeningly small doses. Before embarking on The Addams Family, his directorial debut (not counting his copyright-flouting student film, Superman), he examined the failed debuts of other cinematographers-turned-directors such as Gordon Willis, William A. Fraker, and John A. Alonzo to see where they went wrong and hit upon a common denominator: each had promoted his former camera operator to DP--meaning these guys hadn't relinquished enough control over the cinematography to start thinking like a director. A little of this kind of specialized knowledge goes a long way, but a lot of it would've gone a long way, too. Though Sonnenfeld writes about the Kafkaesque machinations of the movie industry about as well as anyone ever has (an episode in which he pulls a rabbit season/duck season on the heads of MGM during a budget meeting for Get Shorty should be taught in film and business schools alike), he has more to bring to the table, and hopefully will.