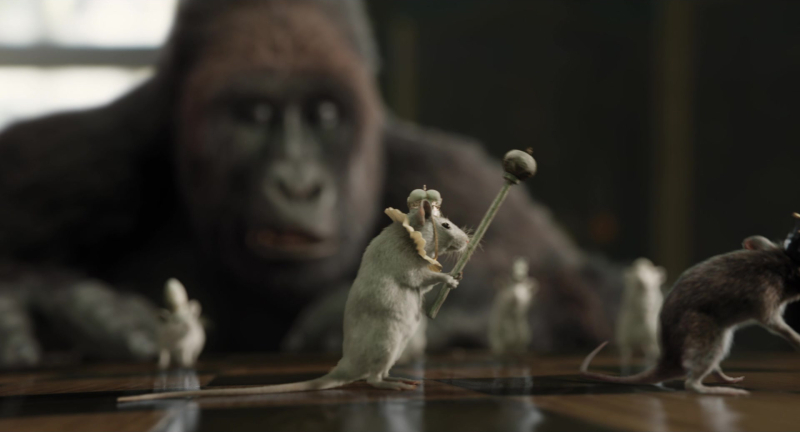 I can't judge how successful Dolittle is on those merits, but as a former dim child who was very irritating to his parents, I recall being diverted for hours by things like anthills, broken sprinklers that could be disastrously dammed, and a mouldering PLAYBOY I found in the woods once, so: pretty low bar. Anyway, on the day Tommy (Harry Collett) shows up to try to get the very retired Dolittle to fix a squirrel, pint-sized Lady Rose (Carmel Laniado), emissary of an ailing Queen Victoria (Jessie Buckley), arrives requesting Dolittle's help in reviving the quiescent, and apparently poisoned, monarch. This sends Dolittle and Tommy on a high-seas adventure in search of a mythical herbal panacea to be fetched from the "Eden Tree." It reminds of the basic plot of The Aeronauts, or it would if The Aeronauts were memorable in any way, shape, or form. Dolittle additionally shares with that film a sort of period deep-fake surreality that is not entirely without charm. Less easy to enjoy are the ad-libbed-seeming wisecracks like "I just joined ca-razy-town!" and "Is that thing up to spec?" Also, why is the talking dragonfly going to marry the daughter of an Italian gangster ant? Shit just got all Burl Ives up in here.

If it matters, Dolittle touches on themes of bravery and not judging a book by its cover. Like how a gorilla can be a terrified thing that screams like a girl--hey, wait a minute. There's a scene, too, where an evil ethnic rabbit intimates that Dolittle has maybe shit himself in fear while imprisoned in Dolittle's father-in-law's dungeon (don't ask)--a fact that Dolittle doesn't dispute and which strikes me as something that would trouble children. Antonio Banderas plays said father-in-law, it bears mentioning. Just as it bears mentioning and for the same reasons that Dolittle's girl Friday is a parrot voiced by Emma Thompson, which is still less distracting than when she does a Yugoslavian accent for some reason in Last Christmas. I have many questions about that movie as well, if you have a minute. Another time? Another time. Jason Mantzoukas voices the horny dragonfly, who notes at one point that the Emma Thompson-parrot's "feathers have really filled out," which also strikes me as fairly not-okay for any number of reasons I'm not supposed to care about because this is a movie for children. Anyway, Chee Chee the Gorilla makes up for almost getting his best friend killed because of his cowardice by beating the crap out of and choking out an evil tiger, meaning that Dolittle is not so much about acceptance and identity as it is about the right people getting beaten. Soundly.

When it's almost over, two animals discuss their trauma with each other. The one had a father who told him he should have been aborted. The other had a father who abandoned their family. Perhaps the message of Dolittle is the importance of choosing your family when you're born to monsters. It's less about fathers mourning daughters and husbands mourning wives, though, than it has people doing those things. For the most part, it's a straight-line adventure involving a journal with a map and Vermithrax Pejorative, somehow. Maybe we should talk about how Octavia Spencer voices a sassy goose and why African-Americans in films like this are so often cast in the role of wise-cracking sidekick. Working in the picture's favour is Downey Jr. doing his Sherlock Holmes with a kind of Scottish brogue and a redemptive finale involving empathy and kindness rather than more violence and anger. It's a good message, actually, and an exceedingly rare one for children's entertainment in the West. You can't slay dragons without killing yourself, you see, so stop trying, for fuck's sake. You idiots. Dolittle even vocalizes it: "It's only by helping others that we truly help ourselves." Nice. That makes it rare enough that you should take the children, dim or otherwise. Not every kid's story needs to end with retributive murder. Still, I would have a conversation with them about the mess leading up to this moral. And how is it that Dolittle appears to speak in every animal's language at the same time all the time, given that they all understand him all the time, unless the animals understand English, which is certainly possible--and is the Eden Tree related to the Biblical Tree of Knowledge of Good and Evil? Because that doesn't make...right, shut up. Originally published: January 15, 2020. 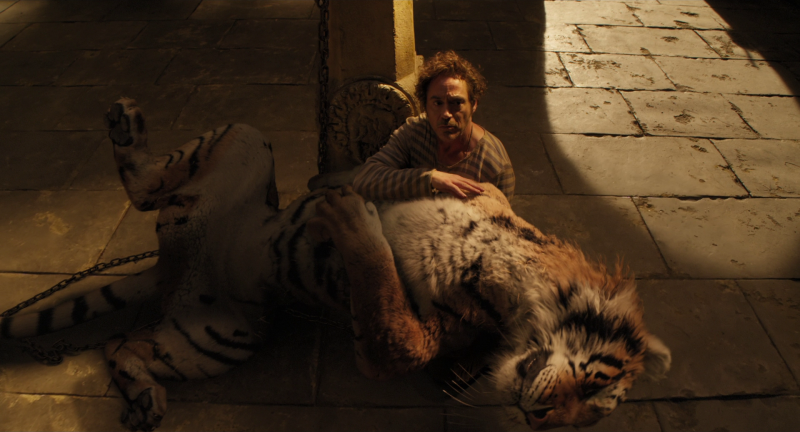 THE 4K UHD DISC
by Bill Chambers Universal brings Dolittle to 4K UHD disc in a 1.85:1, 2160p transfer with Dolby Vision, HDR10, and HDR10+ enhancement. (I was only able to audit it the HDR10 option.) Although the film was shot in 8K, according to the IMDb, because of the CG-heavy post-production, it was finished at 2K. Still, the 4K presentation looks nominally more detailed than the included 1080p Blu-ray. There is a certain reserve to the use of HDR typical of Universal's non-catalogue 4K releases, but highlights are occasionally brilliant and have a naturalism that's almost entirely lacking in SDR, from the soft daylight filtering into the Queen's bedroom to the sunlight pooling into Dolittle's jail cell to the sunrise at 1:11:11, which glints enchantingly off the ocean waves and slippery backs of the computer-generated whales. Even the dragon's fire feels hotter in 4K, as does the lava-like material coursing through the cracks in its skin. Chapter 11, a night scene that takes place aboard Dolittle's sailing vessel, provides an interesting study in contrasts: the 1080p version is thick with a deep-blue patina, and a candlelit lantern stands out for the difference in colour, whereas in 4K HDR, there's a gentler, blue-grey wash over the image that evokes something closer to real nighttime, while the lantern actually emits light. If the visual effects look more like visual effects at this unforgiving resolution, they also have a greater depth of texture and colour. The attendant Dolby Atmos track, in its 7.1 Dolby TrueHD downmix, is amazingly precise, even at its busiest. Dubbed voices are convincingly integrated into the various environments and Danny Elfman's score sounds warm and expansive. Most of the family-movie soundtracks I encounter are via Disney, and this one is considerably more robust than your average Disney mix.

A handful of featurettes--"Talk to the Animals" (5 mins.), "RDJ & Harry: Mentor & Mentee" (4 mins.), "Becoming the Good Doctor" (3 mins.), "Antonio Banderas: Pirate King" (3 mins.), "The Wicked Dr. Müdfly" (2 mins.), and "A Most Unusual House" (4 mins.)--are the same on both discs, but they're presented in 4K (sans HDR) on the UHD platter. Robert Downey Jr. and co-producer/wife Susan Downey act as the de facto hosts of these brief and basically substance-free segments aimed at the young and the undiscerning. Not that I expected the studio to produce or sanction a deep dive into this troubled production, but these extras have been buffed clean of anything resembling controversy or discord and serve a mainly promotional function. At least the Downeys showed up, I guess--no one else from the A-list really does. Does the kid count? He offers an inventory of the acting tips he received from Downey Jr., such as "practice martial arts." Two things I found fascinating: they have behind-the-scenes footage of every animal cast member in the recording studio except Marion Cotillard, whose contract must have a dignity clause; and writer-director Stephen Gaghan's few asides to the camera in B-roll are all hard-subtitled, as if he's heavily accented. Maybe they just figured anyone who would write and direct Dolittle needs a translator. The Blu-ray additionally features an agonizingly long startup trailer for Trolls: World Tour, coming maybe never to a shuttered theatre near you. A voucher for a digital download of Dolittle rounds out the package. 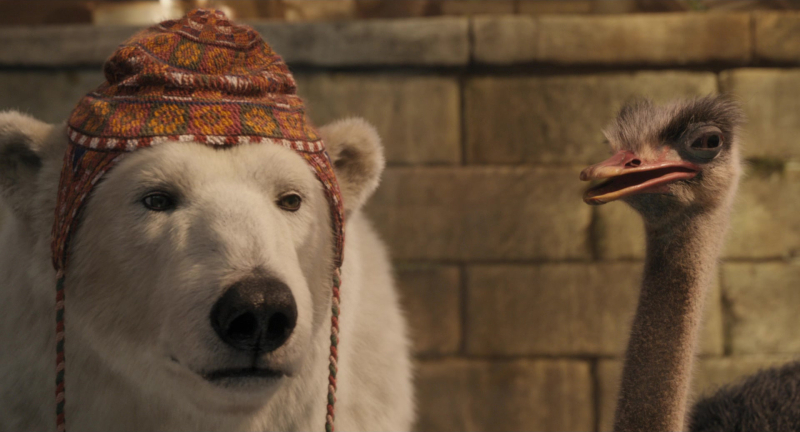