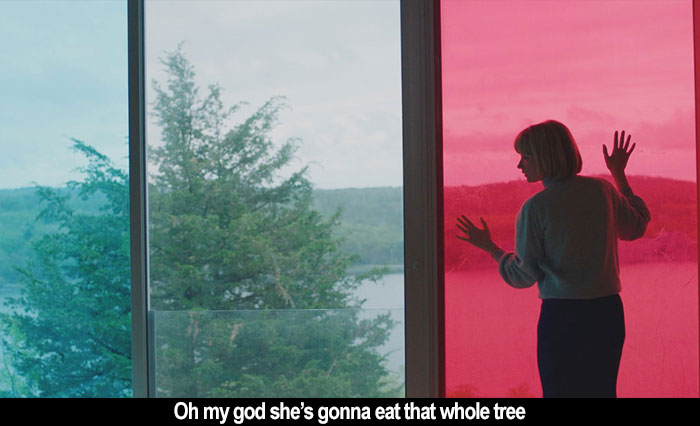 by Walter Chaw Robert Altman's McCabe & Mrs. Miller ends with our Mrs. Miller on an opium trip, absorbed in close contemplation of the smooth, alien landscape of a trinket that's caught her eye. We go on that trip with her, zooming in as she zooms out, skating along the polished curve of some uncharted dimension in an undiscovered country. Meanwhile, out in a snowstorm, the idiot who loves her dies alone. In Carlo Mirabella-Davis's debut feature Swallow, lonesome, abused young wife Hunter (Haley Bennett), because she's trapped, isolated, and miserable, swallows a small glass marble that is the colour of Mrs. Miller's bauble and, as it happens, serves a similar function of distraction, providing a similar illusion of control. Hunter has "pica," a medical/psychiatric condition that causes its sufferers to swallow items that are not edible--in many cases, not even biological. I don't know anything about this disorder beyond what the Internet tells me, but how it functions as the outward expression of Hunter's loss of agency is fascinating and on point.

What Swallow does very well is caricature a certain kind of man who, incapable of separating from his parents, transplants that emotional and developmental arrest into his romantic relationships. Hunter's husband Ritchie (Austin Stowell) is young, gorgeous, and the recipient of a host of nepotistic advantages, including a high-ranking position in his father's corporation. As the film opens, Ritchie--even his name is infantilized--toasts Hunter before thanking his parents, too, for giving them a beautiful, sprawling mansion inside of which Hunter spends her days rambling around aimlessly, playing on her phone, and thinking about becoming an artist but not really doing much about it. Hunter is the child of a lower-class upbringing that has found her in early adulthood in a series of shopgirl gigs, which is how, we infer, Ritchie "found" her, wooed her, and installed her like new carpet in his house. Hunter's ornamental, and the hell of it is that she knows it.

One problem with Swallow is how cartoonish her husband and in-laws are in their villainy. Dad Michael (David Rasche) is a tyrant, mom Katherine (Elizabeth Marvel) is the fucking devil, and all of their interactions with Hunter leave her feeling displaced and humiliated. Thus, she starts to swallow things. Mary Capello's book Swallow: Foreign Bodies, Their Ingestion, Inspiration, and the Curious Doctor Who Extracted Them offers an exhaustive history of items extracted from or eventually discovered in people that should not be in people. Buttons, keys, thumbtacks--I have to think at some point it or a text much like it was consulted for Swallow. Hunter makes a memorial shrine of the objects she's swallowed on her dresser, lining them up like fallen soldiers in her war for control and meaning. When she gets pregnant and sees what's left of her corporal integrity further compromised, things go well and truly off the rails.

A horror film without any supernatural elements, Swallow is the discount version of Vertigo, treading similar ground--toxic masculinity diagramming itself in excruciating detail--but with little interest in developing Ritchie and his enablers, robbing it of much-needed complexity. I did like a "helper" Ritchie hires, Luay (Laith Nakli), a war refugee who looks down on Hunter's disorder initially as a first-world problem but comes in time to understand her condition of despair as not entirely unlike his own. More of that would have allowed Swallow to be something other than an uncomfortable parable for oppressed women. So singular is its subtext that not only is it essentially the film's text, it also comes dangerously close to literalizing pica as a woman's problem.

Yet Swallow is effective as a sort of meticulously focused Lifetime melodrama about a woman who needs to dump her man, full speed ahead and damn the torpedoes. Suggesting her disorder can be fixed by her extricating herself from an abusive marriage is...well, again, I don't know anything, but it feels dangerously facile. Mirabella-Davis's direction is so clean and well-paced that it would've worked pretty well without putting a name to the disorder--pretty well without therapy sequences that offer a few too many possible explanations for Hunter, softening the cruelty she endures. It's a shame, to be frank, that any attempts at explaining Hunter are taken seriously at all. Bennett is Swallow's saving grace. She gives Hunter enormous depths as the character veers from compulsion to control, acquiescence to defiance. Her performance is all small reactions and minor apocalypses. When her mother-in-law declines to share a lunch with her of grilled-cheese and soup, the disappointment that appears at the corners of her mouth and eyes is matched only by the vague embarrassment attending it. Bennett's amazing. And her work here is complex and subterranean enough that it's doomed to be underestimated, overlooked, taken for granted. Like Hunter herself, as it happens.