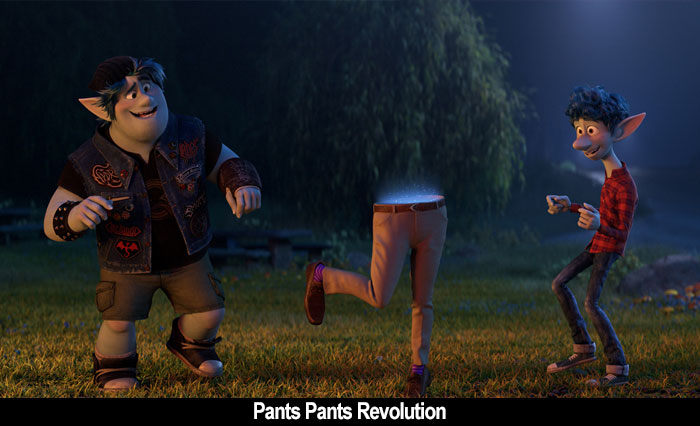 by Walter Chaw Onward is notable not because it features Disney/Pixar's first LGBTQ character (a cop--Jesus, you guys--voiced by Lena Waithe), but because it's the family-friendly studio's first stoner comedy. Dan Scanlon's follow-up to his middling Monsters University is an unholy amalgam of Detroit Rock City and Weekend at Bernie's that finds two elf brothers, Ian (voiced by Tom Holland) and Barley (Chris Pratt), going on a quest to resurrect the top half of their dead dad's body for the one magical day they've conjured for him via an ancient spell and a "phoenix crystal," the double for which serves as the film's exhausted MacGuffin after they squander the first one. The setting is an industrialized world where there was once magic; as technology became easier than memorizing spells and perfecting belief, magic was left to lie fallow, just waiting for a winsome young elf with father and confidence issues to reintroduce it to the world. You can read this a few ways. The way I'm choosing to interpret "magic" is as a metaphor for the American progressive movement, which died at the end of the Sixties with a series of assassinations. If we lay this over Onward, then the film becomes a call to action for progressives in this country to rally after decades of being buried under the inequities of late capitalism.

Better to have that conversation than to focus on how Onward is this weird reconstitution of dozens of obvious touchpoints in a jumble of cheap emotion and unearned pathos. I liked parts of its world-building--the absolute cynicism of an early gag about how winged horses are like raccoon pests in this world, for instance--and disliked the rest of it, like how a bedraggled Manticore (Octavia Spencer) doing her best to operate a family theme restaurant finds her inner mythical guardian through the unfortunate act of burning her business down. There's an awful lot to unpack here about a female small-business owner (voiced by an African-American artist) torching her establishment in the pursuit of buried authenticity. The journey is made all the more troubling for how she's denied satisfaction for her decision in favour of the validation of housewife Laurel (Julia Louis-Dreyfus), who's pursuing her own pocket-emancipation from...what is it she's trying to escape, again? Onward is extraordinarily muddy at the same time it's gallingly simplistic. The characters each have obvious trajectories: Ian needs a spine, Barley needs a brain, Laurel needs a heart, and dad needs a top half. (It occurred to me that Laurel might have appreciated some time with her late hubby's bottom half.) Satisfying their arcs requires little more than moving from points A to B to C as quickly, and sometimes chaotically, as possible.

Ian and Barley's mode of transportation is a '70s love-van called "Guinevere," which is a weird reference to King Arthur's unfaithful wife. I guess I don't get why the van's called that, but whatever. I did note that during a long chase sequence, a signature gag from Eric Red's Body Parts is ripped off, so to speak; that during a chasm puzzle, the "Leap of Faith" gag from Indiana Jones and the Last Crusade is ripped off; that during the final boss battle requiring the puncturing of a giant flaming heart, everything seems ripped off from "Shadow of the Colossus"; and in the end, the closing gag from Back to the Future is ripped off. The love-van is even a little too close to Toy Story, though at least that keeps things in the Pixar family, so to speak. To make dad less conspicuous, the boys fashion a ragdoll upper-half with cap and sunglasses à la Weekend at Bernie's, complete with some of the same animated-corpse gags. That's super disappointing, both because it's derivative and because apparently I remember Weekend at Bernie's far, far too well. For Onward to ultimately be a 1970s burnout comedy points to a myriad of things the film may have been shooting for; in the end, it isn't really anything except an expensive, animated LARPing campaign with a moral about loving the people who raised you, believing in yourself, and not living in the past. Got it? Got it.

The temptation is to rank Pixar films now, either individually or in tiers. There's a temptation, too, to make generalizations about this 25-year-old company releasing their 22nd film, to maybe praise Onward for not being a sequel even while bemoaning the direction it takes. The picture's best described as a trigger for other ruminations--an invitation, as is the current fashion, to quick think-pieces followed by immediate post-mortems of its box-office performance. What it isn't is a particularly rich text for fruitful dissection. Rather, it's a surface entertainment in a landscape packed to the brim, as it has always been, with colourful distractions. You would think the monster at the end, constructed of concrete rubble and a corporate logo, would carry with it some meaningful commentary on gentrification, but instead it just leads to a housewife getting her groove back and a nerd finding his inner Gandalf. Maybe it's all a sop to fandom. But that doesn't hold together, either, does it? And what about the loser brother who turns out to not be a loser because he's a Dungeons & Dragons expert? Onward isn't, alas, something that deserves this much time spent thinking about it. If it weren't a Pixar film, in fact, it would probably only merit the two or three dismissive paragraphs Pixar's imitators generally merit.