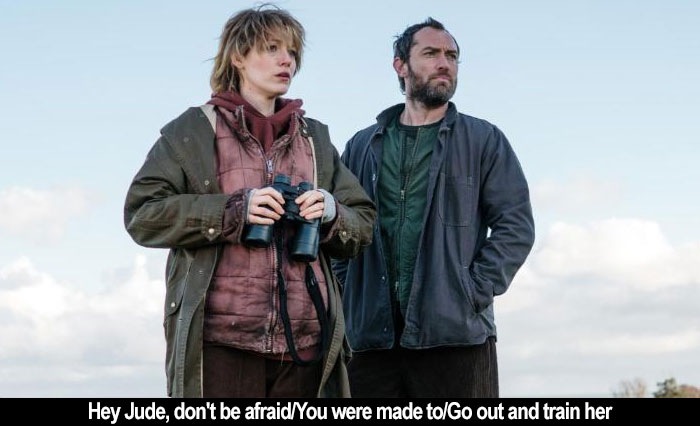 by Walter Chaw Over a black screen at the start of Reed Morano's The Rhythm Section, we're invited to think of the heartbeat as drums and breathing as the bass accompanying it. I would have swapped them, but either way it works as a symbolic framework to marry film to music, and perhaps the process of making a film to a collaborative endeavour like the frisson between musicians in a band--or the autonomous functions of the body that keep you going even when you're unconscious. When I think about "rhythm" as a metaphor, I think of the various breathing methods and strategies devised to help women through labour. Blame Stephen King's The Breathing Method, the only one of the four novellas from his Different Seasons anthology yet to be adapted for the screen. In it, a young woman has so prepared herself for the birthing process that her head goes through the motions of it even after being separated from her body. The thing to which The Rhythm Section aspires, then, appears to be to create something, or to indeed be something, so drilled and efficient that it operates purely on impulse and instinct.

Stephanie (Blake Lively) is living her worst life after an airplane she was supposed to be on with her loving family--parents and siblings we see in a few flashbacks--is blown out of the sky in a terrorist attack. She turns to vice, eking out what passes for an existence to pay for that vice as a cheap prostitute in a London hotel-cum-brothel. One day, a new john reveals himself to have some information about the organization--and the man--responsible for orphaning her, which gives her a new purpose. She steals some cash, buys a gun, and immediately proves herself too physically and mentally weak, not to mention emotionally devastated, to do anything except embarrass herself and probably get killed in the process. It's all very familiar. None of the narrative overlay of The Rhythm Section, from the revenge plot to the gruff mentor and training sequences to the moment of reckoning with the chief bad guy, is exactly fresh. But much like John Wick, or Joe Wright's Hanna, the picture is superlative not because the outlines of this story are unusual but because these plot elements are recognized as archetypes and treated with the reverence of mythology.

Galvanized by her failed assassination attempt, Stephanie finds a name in the cellphone of a dead man and tracks down spook B (Jude Law), an angry loner who's either ex-CIA or ex-MI6 (or maybe both), in a cabin somewhere in Ireland. Over time, she convinces him to help her. She does this mainly by agreeing to swim across a frigid loch, even though she doesn't know how. "I've got nothing to lose," she says, "so fucking train me." He promises to teach her survival and to get her fit, but we have reason throughout to question his motives. (There's a long stretch where I wondered if this was going to be a riff on Memento's programmed-assassin gimmick.) I'm not sure if the ambiguities surrounding B are ever resolved, and more's the better, as the reasons driving most things that happen in this world are impossible to really know. B doesn't soften and become easier to like; Law plays him as prickly and irritated, the android antithesis of the love-bot he plays in A.I., and it's one of his best performances. For her part, Lively is tremendous in a role that demands she evolve Stephanie from bruised instability to still-bruised, perhaps, but now-steely avenging angel looking to mete out violent justice on behalf of her dead family. I think I like that part the most: how Stephanie remains this flawed human inspired by her trauma to punch above her weight class. She reminded me a lot of the avenging angel Olivia Wilde plays in A Vigilante in how the way she fights tells us an extraordinary amount about her character: her state of mind, her fear and uncertainty, her intelligence and resourcefulness.

Consider the film's centrepiece fight in a kitchen: the way it's staged, how Stephanie's physical disadvantage against a male opponent is overcome by the claustrophobia of the grappling area and her ferocious unpredictability. The last person professional poker players want to play is the neophyte who doesn't know what they aren't supposed to do. I suspect it doesn't work that way in fighting, but it works that way for Stephanie. Morano, an ace cinematographer here directing her third feature (but first with a DP other than herself), proves not just a capable action director, but an artful director of action. With DP Sean Bobbitt, she's created a look for The Rhythm Section that's blown-out and desaturated, an expression of the coldness, the bitterness, of Stephanie's point of view. A car chase shot entirely from the passenger seat is immediate, visceral, and as exhilarating as it is terrifying. A stunner for its craft, this sequence has a "you are there" sense of weight and peril that feels like a genuine advancement on an action staple--it feels like the most inspired car chase I've seen since The Bourne Identity. In a just world, Morano would be the breakout revelation of The Rhythm Section; it's easy to be distracted by the familiarity of the notes (as so many of the film's detractors have been), but Morano hears the music and she plays the fuck out of it.