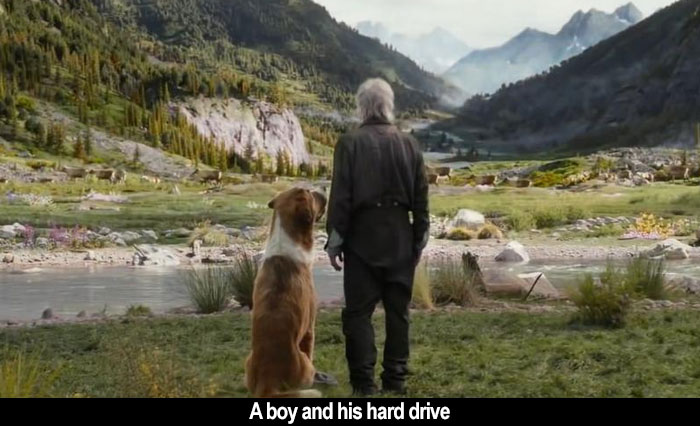 by Walter Chaw Chris Sanders's The Call of the Wild shares a few character names and a setting with the Jack London novella upon which it's ostensibly based but exists in a perverse fantasia of its own that has more in common with Lars Von Trier's surreal Zentropa (or Tom Schiller's Nothing Lasts Forever, to which Zentropa owes more than a little) than it does with London's critique of capitalism. Scenes of the Alaskan Gold Rush herein have about them the crazed Uncanny Valley effect of The Polar Express, which is only slightly less distracting than The Call of the Wild's imagining of an egalitarian utopia free of racism, sexism, even classism. The final triumph of dog-kind in the film recalls, of all things, Matt Reeves's superlative Planet of the Apes trilogy, postulating a future in which hyper-intelligent, non-human mammals inherit the earth. Spearheading this new species of hyper-intelligent freak dog is Buck (shades of Corey Haim's experimental super-dog in Watchers), who in classic Red Scare-agitprop fashion embodies all the best traits of the Old Hollywood Man of Action archetype: being kind to his fellow sled dogs like some canine Babe handing out jellybeans before saving human maidens from drowning.

That Cara Gee, a Native American of the Anishinaabe tribe, plays the maiden in question makes Buck's rescue of her during the period in American history portrayed in the film extraordinarily loaded. In the London text, a fictional tribe of Native Americans, the "Yeehat," are aggressors for whom London nonetheless summons some empathy, acknowledging that the sudden influx of white prospectors into the Yukon has ruined their lives. The novella ends with Buck terrorizing the Yeehat; under cover of darkness, he leaves their throats ripped open in memory of how the Yeehat murdered Buck's buddy, John Thornton. In this iteration, the representative of white colonial intrusion rescues the Native American woman, bringing her back to her black French husband, Perrault (Omar Sy), who gets a moment to say Very Wise Things to Buck in a way that's dangerously close to being super-duper and magical. Also, Thornton (Harrison Ford) doesn't die at the hands of rightfully angry Native Americans. Here, he's a grieving alcoholic who substitutes his dead son with Buck. This is the sort of emotional bait-and-switch that geeks big emotional buttons without having earned the right to do so. The same way emotions are manipulated, Pavlov-like, by dogs and children.

Ford provides narration as Thornton. This is, needless to say, unbelievably distracting given the notoriety of his voiceover for the theatrical cut of Blade Runner. I wasn't able to listen to any of it without thinking about that film's philosophical wrestling with the "reality" of constructed simulacra. The Call of the Wild doesn't similarly wrestle with the strangeness of its animals--imagine a Who Framed Roger Rabbit where everyone spends the whole time pretending that Roger is a real rabbit--but because of the way it anthropomorphizes, indeed evolves the intelligence of the already-more-empathetic animals ("For the first time, Buck knew more than his master"), it certainly inspires some philosophical wrestling among its viewers. While it's a truism that American audiences will suffer any indignity visited upon a person before it will suffer the abuse of a dog, The Call of the Wild is a profoundly cynical exploitation of a dog's inviolate purity in that Buck's inability to distinguish between humans beyond those who are nice to him and those who aren't erases the violence and greed of our pursuit of wealth. The London book is brutal, bleak, and clear-eyed about the zero-sum game of humankind on this earth. This adaptation doesn't even have the courage to kill any of its fake dogs.

About midway through The Call of the Wild, Thornton narrates a letter-cum-suicide note he's writing to his wife, lamenting his loneliness and the futility of striving for a place in the world. His grizzled musings overlay shots of Buck walking by himself under the Northern Lights and gazing at a wolf, the representative of the wild that takes Buck in when Buck, in London's tale, tells the world to go fuck itself and becomes a hunter of men. Thornton now is not just Buck's surrogate father but also his voice, to the point that the two serve the same function in the film. Now that Ford is closer to eighty than to his Indiana Jones prime, this transference of the action-hero responsibilities to a digital phantom carries with it a piquant subtext. As unforgivable as the scene is where Buck helps Thornton stop drinking by tipping his glass over and burying the bottle, it speaks to the ways in which the film is desperate to remake a broken country and its ignoble origins in the image of a heroic, righteous computer dog. Buck is our public school-injected image of the men who took this country. His actions are not ambiguous, his gains are won through virtue, he is unmotivated by riches (this Thornton throws away the excess gold he finds), and he is a friend to all who are friendly. Buck is who we think we are: not fatted calves grown lazy and useless by our hedonistic ease, but wild and true and still fit to run with the wolves. Towards the end of the film, Thornton says, wonderingly, "The fairy tales are true." Yeah, but they're not. The Call of the Wild is a propaganda piece. Take the whole family!