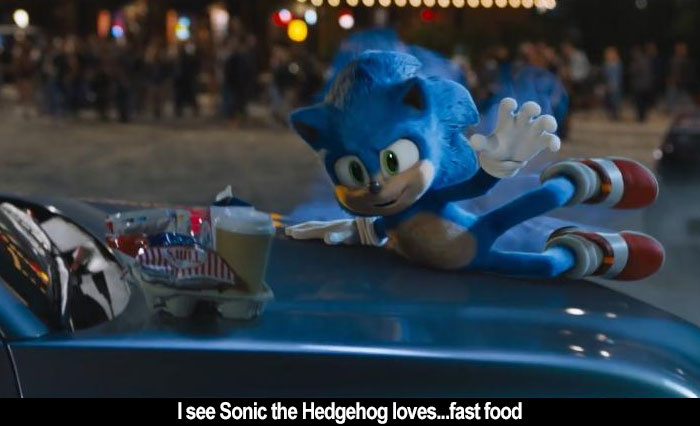 by Walter Chaw At some point, Jeff Fowler's Sonic the Hedgehog, based on the tentpole for the Sega Genesis video-game system, achieves a certain queasy, weightless critical mass of pomo fascination. The story elements, the graphics-I-mean-art-direction, the affable James Marsden boyfriend archetype and manic Jim Carrey capering--all of these elements are so familiar they're almost subliminal, mashed together in epileptic flashes to tell an also intrinsically familiar story about a journey across the country with an alien buddy. Starman, Paul, E.T.--just the first references to register (and as soon as they register, make way for the next set). Sonic the Hedgehog is very much like encountering a Frankenstein's monster constructed out of The Beatles. Oh god, oh Christ, I recognize this, I know from whence this abomination sprang. It is the well of our culture gone rank. The picture's closest analogue isn't other video-game movies, it's Spielberg's knowingly self-loathing Ready Player One, which doesn't get the credit it should for being ashamed of itself. You might feel like Sonic the Hedgehog is "good," but that's you mistaking "good" for "Oh, I know all the words to this song at karaoke, it's good!" Not necessarily.

Sonic the Hedgehog (voiced by Ben Schwartz, who played easily the most irritating character on "Parks and Recreation" that wasn't Aziz Ansari) is a blue hedgehog who runs super fast and sometimes builds up enough energy to turn into a ball of destruction. In a prologue introduced by a record-scratch noise and a "you might be wondering how I got here" freeze-frame (you know the kind; see how you're immediately recognizing stuff?), a young Sonic the Hedgehog gets his adopted mom/mentor/sensei killed, though not before she gives him a message to carry with him as he goes into hiding on Earth. Years pass, Sonic grows up to be a petty criminal who uses his speed to steal a boombox and beanbag chair or some shit, I don't know, and is discovered when Officer Tom (Marsden) clocks him on the radar going, like, 300 miles an hour. He shakes his speed gun, gives it a couple of knocks--"Hey, is this thing broken?" We laugh because this is where we laugh when someone tells this joke again. We laugh because we are programmed to laugh at the prehistoric gag equivalent of a "laugh" sign and a rimshot. Sonic the Hedgehog may as well have a laugh track.

The evil military guy who is also an evil scientist is Dr. Robotnik (Carrey), who has a truly inspired evil dance sequence in the middle of the film but spends most of the time causing me to think about how Carrey is back doing Dumb and Dumber shtick when this is the man who should've won an Oscar for Eternal Sunshine of the Spotless Mind. He does political-caricature oil paintings now, right? And he used to date Jenny McCarthy. I wonder if he had to audition for this movie like he did for Dr. Seuss's widow on that putrid Ron Howard Grinch movie. He's always too good for these roles, isn't he? Man, he's doing the work. What were we talking about again? Oh, right, Sonic the Hedgehog. Sonic has a bag of magic rings like Starman's magic blue balls. Haha, I said "blue balls." That works with Starman, doesn't it? Haha. I never thought of it like that before. But rings. Right. Rings, like the magic ring in the Lord of the Rings movies, except these open portals into other worlds. I'm so sorry, I can actually feel my life draining away.

Marsden is very likeable and Carrey is excellent. The project appears to have been assembled by an A.I. loaded with the last forty years of popular entertainment and instructed to find the absolute common mean that unites them. Gregory Peck once said that what Hollywood wants is to unlock the secret of the endlessly-replicable screenplay, and Sonic the Hedgehog is very nearly the ne plus ultra of nostalgia-geeking. At various times it tweaks lizard-brain memories of: Flight of the Navigator, Explorers, The Cat From Outer Space, Unidentified Flying Oddball, Escape from Witch Mountain, and even newer stuff like Dr. Strange in a French mime gag and the Quicksilver scenes from the most recent X-Men movies. The Hudsucker Proxy? Yes, even that, too. The complaint isn't that there's nothing new here (arguably, there's nothing new anywhere), it's that this movie is just pieces of other movies, chewed up and then reconstituted a little bit wrong. Like Shrek, perhaps, meaning Sonic the Hedgehog will do just fine out there.