by Walter Chaw The first thirty minutes of Martin Scorsese's Shutter Island left me breathless with delight. The rack-focus through mess-hall implements; swaying along a ceiling as we peer beyond the door to the head, where our hero, U.S. Marshal Teddy Daniels (Leonardo DiCaprio), is losing his lunch; the way a ferry blows through a fog bank like Travis Bickle's cab through the steam escaping a New York sewer cap. When it snows, it snows up like in the dream sequences from Bringing Out the Dead (there's even a moment when the smoke from Teddy's cigarette retreats into the butt)--and when a shadowy figure named Laeddis (Elias Koteas) finally materializes in the midst of Teddy's fugue, he bears a striking resemblance to Travis Bickle. (It's not until later that we understand the full extent of this self-reference.) Shutter Island is among the director's handsomest films, and moments of it suggest there's a masterpiece here--as a WWII Holocaust drama, or a ghost story, or a period Red Menace piece, or a 1960s Manchurian Candidate manqué, or a 1940s Freud clinic, or a G-Man noir, or a straight procedural, or a modernist existential piece--if he wants it. But it's less than the sum of its tantalizing parts, providing instead a hackneyed climax that proves just another votive lit in Dennis Lehane's church of dead children.

The staggering number of tremendous actors wasted in so glorious a piffle is the most criminally insane aspect of the picture. Along with DiCaprio and Koteas, we have Mark Ruffalo, Patricia Clarkson, Ted Levine, Michelle Williams, Ben Kingsley, Max Von Sydow, Emily Mortimer, and Jackie Earle Haley, each of whom is given a moment to remind how great they are, which in turn is too much time for us to consider how inadequate is Laeta Kalogridis's (Night Watch, Alexander, Pathfinder) script and Lehane's boilerplate source material in honouring the depths of which this cast is capable. It reminds a great deal, in fact, of Stanley Kubrick's The Shining, in that there's definitely something there, but what that something might be has very little conversation with what might have been. I don't think Scorsese has a feel for the kind of popular shallowness that Shutter Island represents. His confusion is infectious.

Teddy travels to the titular locale to visit the asylum housed there, ostensibly to find a missing prisoner, though it's later revealed that he may have a couple of other reasons for wanting to snoop around the premises. There's a moment early on when I marvelled at the pain of Teddy's revelation that his wife (Williams) had died and how it's followed by one of Thelma Schoonmaker's crystalline cuts to Teddy bringing a hand to his face, allowing us to see that he's still wearing his wedding band. Then suddenly, he's not--then he is again. Then he switches places with his partner, then a woman drinking a glass of water seems to be merely pantomiming drinking a glass of water. Scorsese and Schoonmaker aren't novice filmmakers and accidents like this are frankly too revealing that something's amiss in the film's reality. It's a clumsiness that certainly isn't fatal, although it's definitely telling of the level of discomfort Scorsese has with the gimmick of this gadget picture. The mystery of Shutter Island's structure is exorcised in this way and it never recaptures the sense of dread of its opening reels, making its last two hours something of an ordeal as everything that's aesthetically wonderful about the film is burned off in the crucible of its maddening inconsequence.

Interrogation scenes are intercut with elaborate dream sequences and vivid flashbacks as it becomes clear that Teddy's conflated his presence at the liberation of Dachau with the death of his wife and his mission on the island. As with Cape Fear, Scorsese has the music and the weather reflect the interior torment of his characters: the clouds loom in extreme low angles, the breakers crash in God's-eye views. There're more things Scorsese's dreamt of in his heaven and earth than in Shutter Island's philosophies, I fear, and try as he might, just the sheer volume of crap crammed into the thing has stifled the project in its cradle. Still, it's so gorgeous, so glowering, so obviously the product of a master filmmaker, that its various wounds (and Von Sydow offers a wonderful monologue about the etymology of that word, "wound") aren't fatal until it tries too hard, in a pair of extended chamber-denouements, to explain away everything that was better left inexplicable. Sensing this, Scorsese gives Teddy a closing line that begs for a careful reassessment of all that's come before, but it's way too late by then to consider Shutter Island much more than a bad marriage between one of the best, most innovative filmmakers in the history of the medium and a narrative that's the very definition of mundane. Scorsese shouldn't be reduced to directing a Shyamalan master-plot; it's actually kind of amazing that Shutter Island is as good as it is. Originally published: February 19, 2010.

THE BLU-RAY DISC
by Bill Chambers Paramount brings Shutter Island to Blu-ray in an exceedingly handsome 2.40:1, 1080p transfer. Nick Davis called Robert Richardson's cinematography "gangrenous" and I'd agree that it is--except when it isn't. There's nobody out there right now using the new grading technology quite like Scorsese, who demonstrated in The Aviator how colour processes evolved during the first half of the twentieth century. Here, he pumps up the saturation on the flashbacks/dream sequences to three-strip Technicolor intensity, causing stained wood to look not inappropriately blood red and actual blood to seem wetter than it usually does on screen. At any rate, now would be a good time to pull out a calibration tool like Digital Video Essentials if you intend on picking up Shutter Island, because this thing will sear your eyeballs unless you adjust your set accordingly. Contrast is deep and crisp throughout, fine detail is so spectacular that you can count the flecks in Dr. Sheehan's wool suit (or the trademark motes of dust under Richardson's hot lights, if you prefer), and there's a lovely filmic quality to the image that makes the picture feel like it never left the theatre. I was less enamoured with the 5.1 DTS-HD Master Audio track, which sounds oddly squelched at times. Is it by design that the waves lapping at the shore of Shutter Island aurally "strobe" like chopper blades? Music is the best-rendered (and bassiest) aspect of the mix, dynamic in and of itself and beautifully balanced against dialogue and effects.

The disc closes out with "Behind the Shutters" (17 mins., HD) and "Into the Lighthouse" (21 mins., HD), companion featurettes that, between the careful explication of Easter eggs from Scorsese, novelist Dennis Lehane, et al and the esteemed praise of psychiatrist Dr. James Gilligan (whose guidance in helming the project Scorsese sought out on the basis of Gilligan's seminal book Violence), mount a persuasive case for giving Shutter Island a second chance. A surprisingly definitive interpretation of the film's ending caps the second piece, the lighter of the two on production info. Originally published: June 1, 2010.

THE 4K UHD DISC
by Bill Chambers Shutter Island is the third Martin Scorsese picture to hit 4K Blu-ray after GoodFellas and Casino and the first of his Paramount releases to reach the format. If I had my druthers, Raging Bull or Taxi Driver would've gotten there first (or, if we're narrowing the field to his Paramount titles, Silence, Bringing Out the Dead, or The Wolf of Wall Street), but all the same I'm surprised how much I enjoyed revisiting Shutter Island in UHD. The source for this upgrade is presumably a 2K digital intermediate that's now 10 years old and showing baked-in imperfections under the magnifying glass of upscaling and HDR. About 1 minute and 45 seconds in, as Leonardo DiCaprio's Teddy recovers from a bout of seasickness, highlights and even flesh tones clip for the duration of a shot, and there are plenty more shots like this sprinkled throughout the feature, though none last more than a few seconds or occur consecutively. As seems to be the case with older D.I.s, the 35mm film grain sometimes looks overly gritty and doesn't always interact well with HDR when the image gets pushed into the high nits, which happens several times here in high-contrast flashbacks and dream sequences that put DP Robert Richardson's ultra-bright heat lamps to effective use. And the greenscreening has become screamingly obvious in 4K (e.g., when Teddy, Chuck, and McPherson peer down from the bluffs at 16:05), which may not be to everyone's taste but feels utterly appropriate from a thematic standpoint, considering the first 100 minutes of Shutter Island constitute a glorified holodeck scenario. 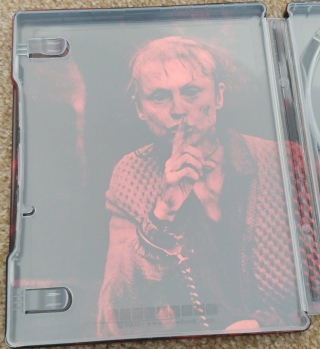 With all that said, this 4K presentation--complete with Dolby Vision, although I audited it in HDR10--is superior to the 2010 Blu-ray. That disc, while comparably sharp (though close-up details like the relief pattern on a canvas or the grooves on a vinyl record seem more refined in UHD), is gratuitously dark at times, and its occasionally "gangrenous" colours have become less so in this incarnation, as if a thin layer of green scum has been lifted off them. Given that almost exactly ten years have elapsed since I saw Shutter Island in a movie theatre, I don't know how revisionist this is, if at all, but a much broader and more gratifying palette emerges in 4K HDR. The tableau at 29:15 of Teddy and Dolores in their apartment, for instance, ashes falling all around them like black snowflakes as blood turns her yellow dress red, is a wow moment in both 1080p and 2160p, but the SDR colours are sort of one-note. In HDR, we suddenly see the depth and variety of greens in their colour-coordinated surroundings, and the walls are salmon instead of nondescript beige. Meanwhile, with the highlights ramped-up, the way that Richardson's overhead lighting catches individual ashes adds a disturbing twinkle to the image. Shutter Island may require too many caveats to be demo material, but this shot exemplifies the benefits of HDR, and virtually every scene offers some measure of improvement in 4K. As for the audio, the lack of an object-based remix may disappoint prospective buyers, but rest assured the previous 5.1 DTS-HD MA track holds up. Indeed, it sounds better than I expected based on my previous assessment. (Blame it on the garbage speakers I had back then.) Although no new extras were prepared to commemorate the film's 10th anniversary, the disc is packaged in a collectible steelbook with the old Blu-ray Disc, whose supplementary material is discussed above.