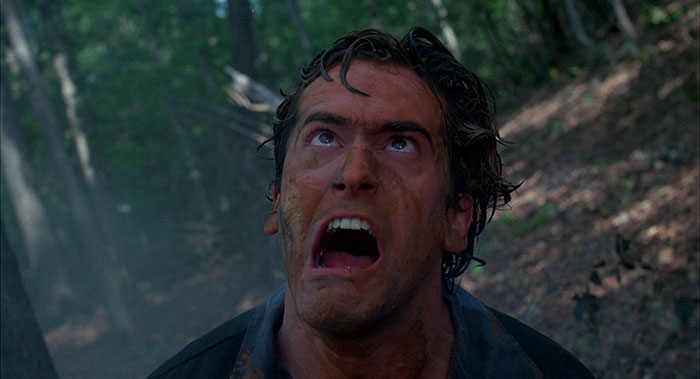 by Walter Chaw More a remake with yuks than a sequel, Sam Raimi's astonishing Evil Dead II is a kitchen-sink splatter flick inspired by the drive-in spam-in-a-cabin tradition and leavened by an unhealthy fascination with The Three Stooges. Leading man and crash-test dummy Bruce Campbell (Bill Chambers referred to him once as "brick-jawed," and I can't improve on that, literally or figuratively) turns in a legend-making, career-defining performance, re-imagining his Shemp, Ash, as a man of stage-melodrama, white-hat resolve who comes of age upon discovering his knack for slaying the undead. The great unspoken peculiarity of siege classics like George Romero's Night of the Living Dead is that there is somehow always discovered a hero who's biologically hardwired for the task of staying alive in the face of great demonic hordes. The crux is that it's unspoken no longer in Raimi's "Dead" trilogy (the third instalment the out-and-out comedy Army of Darkness), which, by the end, becomes a rags-to-rags fable about a retail clerk repelling an army of Harryhausen skeletons laying siege to a medieval castle. In its way, this is as canny a satire of the consumer/clerk relationship as anything in Dawn of the Dead.