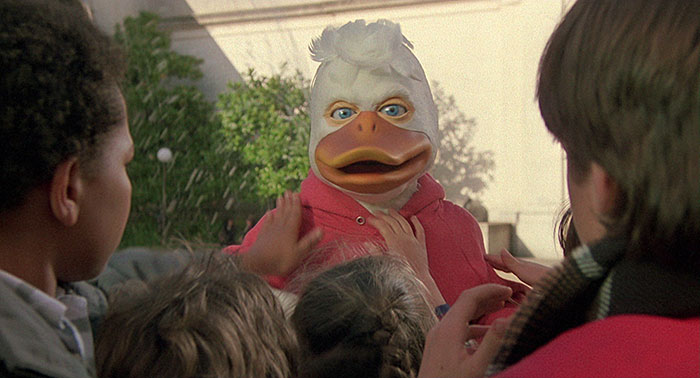 by Bill Chambers If you'll indulge me, as I recall it was at my local Sunrise Records that I first laid eyes on the egg with the hatched beak chomping on a cigar, which became as emblematic of Howard the Duck, albeit not as iconic or enduring, as the gleaming bat symbol would become of Batman three summers later. It was on the cover of a 12" EP of the movie's title track, performed by Dolby's Cube featuring Cherry Bomb, a fictitious band consisting of actresses Lea Thompson, Liz Sagal, Holly Robinson, and Dominique Davalos, who did all their own singing. (Thomas "She Blinded Me with Science" Dolby wrote and produced their songs.) When I flipped the jacket, I encountered a photo spread of Thompson in rock-'n'-roll leathers and big, crimped hair, and I reacted how any 11-year-old boy hot for Marty McFly's mom would: I begged my dad to buy it for me. 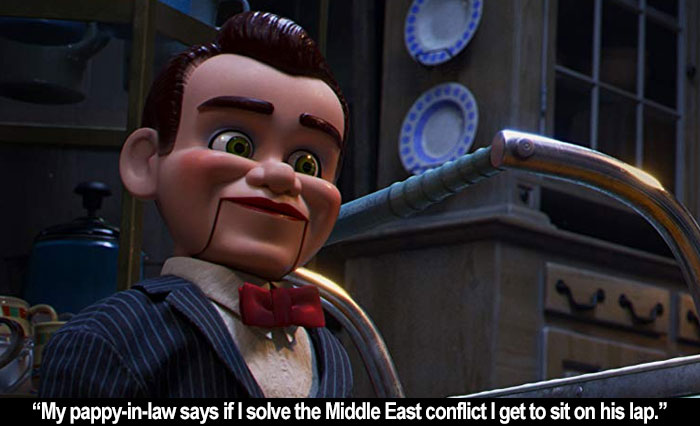 by Walter Chaw Much like AI, Steven Spielberg's similarly fascinating, similarly imperfect spiritual collaboration with Stanley Kubrick, Josh Cooley's Toy Story 4 asks questions about creation and the responsibility of the creator to the created. Toy Story 4 is itself the product of a chimeric parentage, this being the third sequel to a franchise that is to Pixar what Mickey Mouse is, or once was, to Pixar's parent company, Disney. Woody (voiced by Tom Hanks) is a modern archetype of the sort described by Barthes: an image, a sign, encompassing an entire history of meaning for members of a sympathetic culture. It means one thing by connoting a multitude of things. The Toy Story films rely on the shared human experience of creating totems in the endless fort/da exercises we engage in as children. Inanimate objects are imbued in that way with our expectations of our parents and our disappointments with them, too, as we re-enact events real and play out dramas imagined. They are practice and we invest them with the payload of our souls; the root of the term "animation," after all, is that literal investment of a soul, and so many of our creation mythologies--Prometheus, Eve, the Golem--consider the lives of the lifeless. The Toy Story films are disturbing because they occasionally cause us to question our moral responsibility to things we gift with life only to abandon emotionally, if not always physically. (A quick scan around my office finds it to be a plastic chapel of toys I couldn't buy as a child.) They are disturbing because they speak to ideas of free will vs. predestination that apply to us--created beings, perhaps, programmed along certain paths and predilections certainly. Toy Story is epistemological theology.