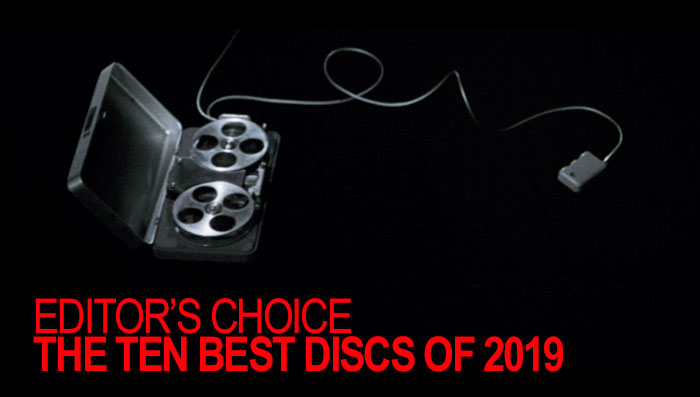 Because a disc still plays when the Internet is out.

Because so few feature films stream in 4K compared to the amount released on disc.

Because an ever-increasing bias towards new releases and original programming on subscription services means that many beloved older titles readily available on DVD/Blu-ray aren't viewable online.

Because an influx of streaming apps is spreading content across too many platforms to keep up with or afford.

Because a hard copy can't be modified or deleted in the middle of the night.

Please note that, as before, I limited my selection process to titles I can personally vouch for--all regions and formats were eligible--and found myself giving more weight to the main feature than to supplementary material. (One of the reasons the scholarly package Indicator assembled for Dennis Hopper's maddening The Last Movie just missed the cut.) Some of these could still be reviewed in full at a later date.

10. SCARFACE: THE WORLD IS YOURS LIMITED EDITION - 4K ULTRA HD
Universal, Region-free (4K/Blu-ray)
There's a separate "Gold Edition" of this release for those who don't want the tchotchke, a 10", 2lb. reproduction of the film's The World Is Yours statue, but I'm including the "Limited Edition" since its arrival put a smile on my face during a trying time and set the perfect ambiance for revisiting Tony Montana's rise to power and fall into an indoor swimming pool. Universal's 4K reissue of this modern perennial rights a few previous wrongs, chiefly, it does away with the noise-reduction that bedevilled the 2011 Blu-ray, and the HDR palette spices up the colours considerably. The DTS:X remix is livelier than the old 5.1 soundtrack, too; this should be the definitive Scarface for years to come. In addition to the aforementioned statue, the Limited Edition comes with a companion Blu-ray of the 1932 Scarface, directed by Howard Hawks, that hack. The world is mine!

8. MATEWAN - BLU-RAY
Criterion, Region A
John Sayles dramatizes a dark chapter in American history--The Battle of Matewan, which pitted West Virginia coal miners against detectives hired to thwart their organizing efforts--that had been all but forgotten by the time he decided to make a movie about it. Showing a keen sense of our current epoch (all the bad guys' anti-union rhetoric could come straight from the mouths of today's billionaire class), Criterion has welcomed this quietly riveting film into the collection with a Blu-ray transfer that finally honours the sooty beauty of Haskell Wexler's Oscar-nominated cinematography. (VHS and DVD flattened his crepuscular shadows and oversaturated the deliberately muted colours; Criterion is making a habit of reviving some challenging sources, from McCabe & Mrs. Miller to #6 on this list.) The audio is rich, too, belying its mono status, and there's a good batch of special features, some archival, including Sayles and Wexler's feature-length commentary--recorded just before the latter passed away--and featurettes on both Matewan the film and Matewan the place. Wexler doesn't say much, for the record, but the movie speaks for itself.

7. KUNDUN - BLU-RAY
Kino Lorber, Region A
Distancing itself from the film to appease China, Disney licensed Martin Scorsese's masterpiece to Kino for a long-overdue Blu-ray release. The transfer frankly feels oddly perfunctory, especially for something shot by a stickler like Roger Deakins (the film had a vibrancy on the big screen that's only hinted at here), though of course it blows Disney's decades-old, non-anamorphic DVD out of the water. And then there is the matter of the feature-length making-of documentary on the second disc--a bonus feature almost worth the purchase price by itself. The story of the fourteenth Dalai Lama's early years, which coincided with Mao's rise to power in China, Kundun was always an outlier in Scorsese's filmography, but a bit where he frets over having to direct horses hammers home just how far out of his comfort zone he was here--even if the film is perfectly in keeping with his spiritual preoccupations. Also, he was right about Marvel.

6. KLUTE - BLU-RAY
Criterion, Region A
A whodunit shaved so close to the bone that it's almost impressionism. What surprises about Klute is how endlessly rewatchable it is--even after the central crime is solved, other mysteries abound in the pregnant silences between straight-arrow amateur sleuth Klute (Donald Sutherland) and call girl Bree Daniels (Jane Fonda), whose slow-burn courtship is a puzzle in itself. And it's so gorgeous. Although Gordon Willis's cinematography normally gets reduced to mush on video, Criterion's Blu-ray is a revelation. The image has been skilfully rejuvenated under the supervision of camera operator Michael Chapman (both Willis and director Alan J. Pakula are now deceased), who does away with the yellow tilt of previous transfers and brings balance to the bright highlights and deep shadows. At home, Klute finally looks like the baroque painting it was meant to look like, and while the extras are gratifying in and of themselves--I love it when Dick Cavett interviews are pulled out of the vault, and there are tantalizing excerpts from Matthew Miele's upcoming documentary about Pakula--the disc would be worth the SRP based on the transfer alone.

5. BLUE VELVET - BLU-RAY
Criterion, Region A
If you own MGM's Blu-ray release from 2011, fair warning that you already have the most collectible extra here, i.e., the "lost footage," a 50-minute compilation of deleted scenes, any one of which might've radically changed the tenor of Blue Velvet as we know it. Safe to say, though, that any Lynch devotee will feel incomplete without this Criterion platter, which restores the movie to a breathtaking lustre, finding more detail and colour nuance in Frederick Elmes's cinematography. Meanwhile, presented for the first time on Blu-ray is the film's original Dolby Stereo soundmix (in lossless audio), as well as a 5.1 remix overseen, like the video transfer, by Lynch himself. Criterion recycles MGM's other supplements (including the 70-minute retrospective making-of documentary Mysteries of Love) while adding a few essentials of their own, such as filmmaker Peter Braatz's 89-minute multimedia essay "Blue Velvet Revisited"; Braatz visited the set of Blue Velvet in 1985 and recorded a wealth of audio and video that finally sees the light of day, in a quintessentially Lynchian form. I had the option of seeing Blue Velvet on the big screen again this past summer and passed--this elegant set had already scratched the itch.

4. HITCHCOCK: BRITISH INTERNATIONAL PICTURES COLLECTION - BLU-RAY
Kino Lorber, Region A
A quintet of early, horny features from Hitchcock's British International period, collected in a 2-disc set that fills a nice big gap in one's Blu-ray collection of the auteur's work. The films themselves--the silents The Ring, The Farmer's Wife, Champagne (presented in its 2012 BFI restoration), and The Manxman, plus the talkie The Skin Game--aren't exactly prototypical Hitchcock, leaning more towards comedy and melodrama than suspense, though nearly all of them contain psychologically complex characters and telltale moments of dread, in addition to glimpses of the expressionistic sensibility that would flourish soon enough. (You can sense Hitchcock entertaining himself during the listless Champagne--it feels like a Titanic movie where the boat forgets to sink--with tricky POV shots through champagne glasses and the sad puddles of alcohol at their bottom.) The Ring includes commentary from Nick Pinkerton, while Farran Smith Nehme records yak-tracks for Champagne and The Manxman; I confess I haven't listened to these yet, but those are the right people for the job. New piano scores decorate the silent movies, which maybe could've spilled over to a third disc for better compression yet look so much better than bootleg alternatives it feels churlish to say so. There are also relevant audio clips from the legendary Hitchcock-Truffaut interview to save you from having to go fishing for them.

2. SUSPIRIA - 4K ULTRA HD
Synapse, Region-free (4K)/Region A (Blu-ray)
Given the seal of approval by DP Luciano Tovoli, Synapse's 4K presentation of the original Suspiria made my jaw hit the floor. The company previously dropped this restoration on 1080p Blu-ray and there have been other 4K reissues throughout the world; what distinguishes Synapse's 4K version from all comers is its inclusion of HDR/Dolby Vision and a Dolby Atmos remix, both of which bring Suspiria uncannily close to how it exists in memory: as this feverish takeover of the senses. This was the last Italian production to use Technicolor's legendary dye-transfer printing method (a process Tovoli modified to beef up the reds and eliminate any chance of colour bleed, which was inevitably reintroduced into the image in NTSC), and while the Synapse Blu-ray did a more than creditable job of conveying its three-strip vibrancy, this is like waking up in Oz. Fortunately, even though the 4K platter is bereft of supplements save a pair of commentary tracks from Dario Argento scholars, the supplement-rich bonus disc from the BD package returns here.

1. DO THE RIGHT THING - BLU-RAY
Criterion, Region A
Thirty years have passed since Spike Lee's best joint--or, at least, first great joint--disrupted the summer of Batman, and Criterion honours that anniversary with a significant upgrade to their previous DVD and LaserDisc releases. For starters, the film's subtle yellow tint has been restored, making the oft-invoked heatwave into something almost tactile and adding unexpected luminosity to the variety of skin tones on display. Also treated to brand-new transfers were Lee's storyboards and St. Clair Bourne's excellent documentary "Making Do the Right Thing", which join a mix of old and new supplements that, by virtue of hailing from 1989, 1999, 2009, and 2019, unfortunately chart the lack of social change in the decades since Mookie threw a trash can through the window of Sal's Pizzeria. The 106-page companion book is the icing on the cake, reproducing as it does large swaths of Lee's long out of print production journal. Fight the power.