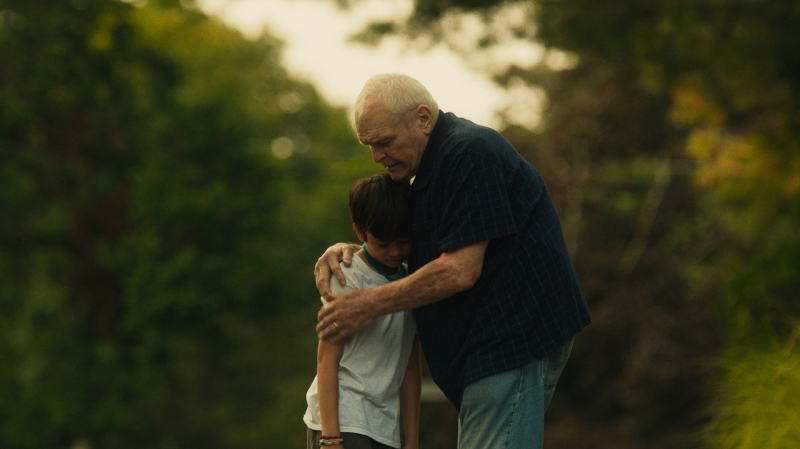 Ahn made his debut with the extraordinary Spa Night, about a young Korean man working in a traditional Korean bathhouse in L.A. and gradually coming to terms with his homosexuality. There's a scene in that one where his mom sits on the floor, peeling an apple with a knife, that is so specific to me in my own memories of old Chinese women doing the same thing in the houses where I grew up that it took my breath away. Delicately observed, in other words, it's a debut that announced a filmmaker who understands visual filmmaking and is adept at marrying image and narrative. In being about very little, Ahn's films, even with so small a sample size, manage to say a great deal. In Driveways, Kathy and her young son Cody (Jaye) road-trip from Michigan to upstate New York to clean out the home of Kathy's sister, who, it turns out, was a hoarder, making the job of preparing the house for sale a daunting one, especially for one person. But Kathy plows on, and scenes of her boxing shit up and prepping a yard sale are intercut with her calling to beg the electric company to turn on the power for a few days as well as her interactions with a broker who insists she'd like to do a walkthrough of the property immediately.

Driveways is composed of interactions like this, as Ahn allows his actors to complete thoughts before looking away. Cody meets next-door neighbour Del (Dennehy), a widower who spends his days at the local VFW and his nights eating takeout or microwave meals by himself. He's lonesome. It becomes clear that everybody here is lonesome. The other neighbour, Linda (Christine Ebersole), says racist things after qualifying that she doesn't mean to be racist. She's not the villain of the piece. Everyone's kind to her, in fact, and she does the right thing when her troglodyte grandsons set off fireworks one night outside Kathy and Cody's makeshift bedroom on the packed home's enclosed porch. Ahn captures Cody's surprise and then wonder with a bracing, fully-developed sensibility. At one point, he lets his child actor go through a range of emotions--none of them overplayed--and then cuts to a shot of Cody's head framed against a window with fireworks booming outside. Things are magical for children. They don't need lengthy introductions and statements. Memories form and Ahn lets them.

The only viable antagonist is the passage of time. Cody will grow up and grow cold in some ways, Del will move away to an old-folks' home, and Kathy will have to manage her grief and aloneness for not just herself, again, but also her kid. Life is tough, but Driveways has an empathetic eye for the small moments that create trust between strangers, or enmity, or love. This is the breakout for Chau she deserves. There's a scene following a birthday party for Cody that starts badly but ends brilliantly, with Del telling Kathy that the night her sister died, Del let her into his kitchen to call the paramedics so she wouldn't be embarrassed by them going into her house. Kathy cries. Chau plays it without anything like fanfare or histrionics. It would be tempting to claim the opportunity for lamentations and rendings of flesh; Chau instead turns away from Del, though he does see what's happening, even if he pretends otherwise. Of all the things Driveways is about, it's most about how little acts of kindness can mean everything and do for a lifetime. Enough of them can maybe change the world. Ahn makes these character sketches human beings, and then he gives them dignity.

I want to say so much more. I want to give away this movie's secrets and dissect each of its tiny interpersonal moments. But it's all there in an exchange between Kathy and Del after Linda's idiot offspring's own idiot offspring get a little rowdy with Cody: Kathy says she should go over and talk to Linda, to which Del responds that he wouldn't waste his time talking to that woman. Kathy, without pausing and without rancour, says, "Yeah, fuck Linda." A few beats later, as he's getting ready to return home from an afternoon spent reading old NATIONAL GEOGRAPHICs with Del, Cody asks Del whose name is on the address label. It's Del's wife. When Cody leaves, Del gazes at one of the magazines and chews the inside of his cheek for a second. I think maybe Del's wife used to sit on that same porch with Del, reading those magazines as the hours slipped by. Maybe he didn't know how precious that time was, then, but he does now. If you articulated any of that as exposition, Driveways would be unbearable: saccharine and twee. The film trusts its cast and a fantastic script by playwrights Hannah Bos and Paul Thureen to speak volumes without words. It also trusts its audience to be made up mostly of human beings with some water under the bridge. Watch for Ahn. Yeah, you should keep an eye on him.