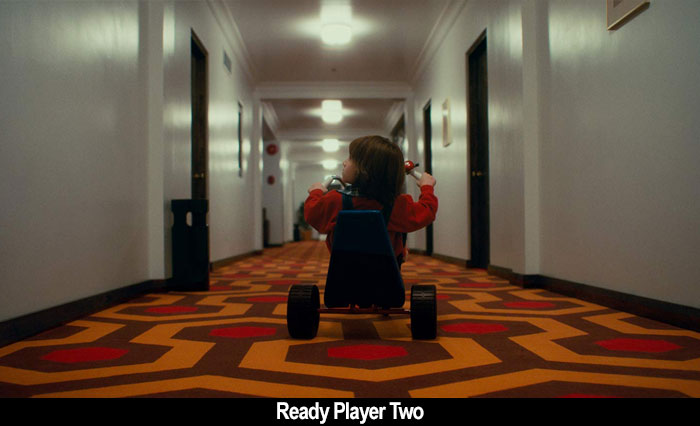 by Walter Chaw Like the book upon which it's based, Mike Flanagan's Doctor Sleep is in constant tension with its legendary progenitors. It's not unlike Harper Lee's Go Set a Watchman in that sense: if a film version were ever attempted, it would likewise be dealing with not only the legacy of one of the most revered novels of all time (and I would hazard that The Shining isn't just popular, but great), but one of the most revered film adaptations, too. Just as it's impossible to read Lee's sequel without picturing Gregory Peck as Atticus and Mary Badham as Scout, it's impossible to read Stephen King's Doctor Sleep without imagining entire scenes from Kubrick's The Shining overlaying the text like the memories haunting that film's Overlook Hotel. How, for example, will Flanagan handle the death of beloved Overlook chef and Danny's mentor in extra-sensory perception, Dick Hallorann? In the book, Dick lives. In the film, where he's played iconically by the inimitable Scatman Crothers, he most assuredly does not. Go the one way and piss off King, who's held a grudge against Kubrick and The Shining for decades now; go the other and you're pissing off virtually everyone else by pretending an all-time classic picture never existed.

The answer, curiously enough, is that Flanagan rides the line. His Doctor Sleep understands the weight of the legacy he's inherited. Not merely King's writing--which, in terms of popularity, has only The Beatles and Jesus to compare in the history of American popular culture--but one of a handful of bona fide mainstream horror classics. The closest analogue, in fact, to Doctor Sleep is Star Wars: The Force Awakens, and the two films, in terms of their respect for legacy and payoff for the devout, are similarly successful, or unsuccessful, and for the same reasons. Doctor Sleep understands what made The Shining (and The Shining) tick: not the supernatural shenanigans, but the exploration of what a broken man will do to quiet the voices in his head. In that pursuit, little Danny Torrance has grown into traumatized, devastated Dan Torrance (Ewan McGregor), who, as the film opens, is lying in some naked woman's puke after a night of doing lines, drinking, and fucking. While escaping in the morning, he stops to take money out of her purse when a voice in his head admonishes him. It's that of his friend, Dick (Carl Lumbly); like imaginary friend Tony before him, Dick is acting as Dan's protector, confidante, and conscience.

Dan, for the uninitiated, has something Dick calls "the shining." He can find lost things, knows stuff he couldn't possibly know, and, exposed to the right environment, he can be the unwitting conduit through which angry emotions manifest themselves physically. It's that idea that's the catalyst for this sequel, another ironic, metatextual echo--that sometimes there are events traumatic enough to leave emotional ripples that push their way through into the material world. I presume King wrote the book to "undo" or "redeem" the changes Kubrick wrought to what I believe to be King's most personal work, a memoir of sorts in which he talks about his anger and substance abuse; most importantly, his guilt. I think Kubrick's liberty with it kept him up at night.

Dan achieves sobriety and lands a job with the help of kindly Billy Freeman (Cliff Curtis). Billy knows someone who could use some help at the hospice down the way, and Dan, because he's unusually comfortable with death, feels at home at last. Then one night, he receives a message from a little girl with the shining, Abra (Kyliegh Curran). Abra, who believes that "Uncle Dan" is her imaginary friend until a group of spirit-vampires led by Rose (Rebecca Ferguson) start to hunt her and she calls out for help. These "vampires" are new: nomadic, like the bloodsuckers from Near Dark, but interested only in "eating" fear and pain in the form of "steam" that sublimates from their victim's lips at the moment of their death. They mostly kill children, it seems, and store said steam in a makeshift mini-fridge in Rose's RV. Their best prey has "the shining," and they worry the world's supply is dwindling. Rose's pack is compared to the Overlook Hotel as things interested in, and dependent on, these gifted children for survival. It's a conceit that reminds of Harlan Ellison's energy-succubi in "Try a Dull Knife", in literal construct and as metaphor for enervating social wolves in philanthropic sheep's clothing. The Hotel represented redemption for Dan's alcoholic dad, Jack, who lost his job as a teacher and broke his son's arm in a drunken fury. Doctor Sleep is, alas, only further confirmation that Jack doesn't deserve redemption.

Doctor Sleep appears to be about how the wake left by abuse and alcoholism is wide, deep, and invariably fatal to bystanders. At the end of the film, Dan returns with new charge Abra to the Overlook to confront, essentially, his demons and, in one of a couple of uncomfortable implications in the film, use his trauma as the means through which to save Abra from her trauma. The tension here, of course, is that in The Shining, the boiler to the hotel explodes, taking Jack (who has obliterated his face with a roque mallet) with it, while in The Shining, the hotel does not explode and Jack freezes to death in a topiary maze. That means in Doctor Sleep, Danny and Abra do not return to the hotel and...look, Flanagan rides the line and he rides it elegantly. He avoids the too-telling sentimentality of Doctor Sleep's ending, for the most part--perhaps having learned his lesson about hewing too closely to King's resolutions with Gerald's Game--while honouring King's themes of redemption and sacrifice. Cleverly, in the act of remaining absolutely true to Kubrick's vision, he provides a climax that is absolutely true to the book's climax--that book being The Shining. What he does here isn't perfect, yet it is miraculous.

When Doctor Sleep doesn't work, it's because there's so much distraction both within a piece that deals with the past, the present, and lore for a whole new species of big-bad, and without in the decades of baggage everyone brings to the project. All of it takes on the not-entirely-pleasant feeling of watching a team of very skilled jugglers juggling an unwise amount of dangerous objects too close to an audience desperate for them not to fail. It's also a mistake, it should be noted, to turn Dick into Bagger Vance, something Kubrick understood and something King still struggles with. (I'm looking at you, The Green Mile.) When Doctor Sleep does work, it's because McGregor and Ferguson sell their performances: the one as a man trying to sometimes literally come to terms with his abuse and his dead father; the other as a woman trying to maintain her hold on a group of strays looking to her for leadership. Most importantly, when Doctor Sleep works it's because Flanagan is a guy on the top of his game who obviously adores King and Kubrick alike and so gives King the ending King wishes Kubrick had--and gives Kubrick the sometimes-literal shrine a master deserves in the form of meticulously-duplicated angles and soundtrack cues. If Doctor Sleep is the product of two powerful fathers, the end result of the union is that unlikeliest of mules: a viable one. I'll be seeing it again.