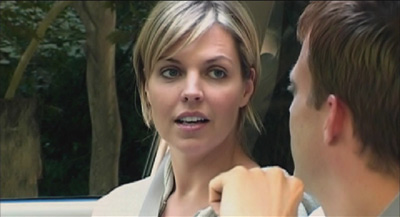 by Walter Chaw The idea is that we've grown arrogant in our luxury, that we're a generation fattened on cell phones, the Internet, and the double-edged sword of 24-hour convenience. 1999's
has become sort of a favoured whipping boy of this spoiled culture (nothing breeds contempt like success), but what's missing in the backlash is the idea that the picture, besides being a seminal indie cross-marketing exercise, predicted the new wave of aggressively nihilistic horror films in our post-millennial/post-9/11 canvas. More literally, The Blair Witch Project dealt with our status off the proverbial reservation, counting the layers of technology with which we insulate ourselves from the capricious vagaries of reality and nature like rings on a felled tree. "There are more things in Heaven and Earth, Horatio, than are dreamt of in your science," indeed--things like witches.

Or sharks, as it happens, in Chris Kentis's Open Water, an obvious successor to The Blair Witch Project that is neither as imaginative nor as existentially terrifying. Rather, it's content to just travel a lot of the same dirt backroads. Shot on fairly bad-looking digital video, with some of the underwater moments facilitated by a plastic tote purchased from OfficeMax, Open Water follows the adventures of workaholic couple Daniel (Daniel Travis) and Susan (Blanchard Ryan, her first name actually "Susan," thus marking another similarity to The Blair Witch Project: the not bothering to rechristen cast members) as they muster for a much-needed vacation, fail to have sex, book a dive trip, and promptly get stranded in the titular expanse with nightfall, panic, and sharks closing in. The premise is compelling, but the film takes too long to get on the waves and, once there, illustrates that it's harder than it seems to sustain tension and build character. Compounding the ills, for all of its tense suggestions, Open Water boasts of only one truly memorable scene, which happens to be aided by complete darkness à la Blair Witch.

Time extends--the couple is admirably panic-free for the first few hours of their abandonment--and then a few of the plot points (that Susan doesn't know not to drink saltwater, for instance) strike as unrealistic. I'm not certain that there are any reasonably educated people on the planet, particularly those who have been dive-certified, who don't know that you can't drink seawater to hydrate yourself. A moment near the haunted conclusion strikes a chord, too, reminding of a Stephen King short story called "The Raft" that, at its best, managed to evoke the cruel animal logic of the food chain. But by the end, the one sport still worth indulging is spotting how the cell phones of the prologue have morphed into Daniel's tiny knife--held in a similar grip as a talisman against entropy. And how a complaint such as "We don't know anyone who's been bitten by a shark" takes on a familiar irony in our information age.

Open Water scores points with Daniel's saturation in popular culture, the pointed irony that the ease with which he and Susan book and execute an off-the-cuff vacation in our digital wonderland has contributed in part to the fine mess they're in. Nevertheless, the film strikes a dull nerve in our yuppie technocracy (perhaps indicting good ol' Yankee arrogance along the way), and in so doing, by its own existence, demonstrates that just because it's easy, doesn't mean it's good. Originally published: August 20, 2004.

THE DVD
by Bill Chambers Lions Gate presents Open Water on DVD in a 1.85:1 anamorphic widescreen transfer* sourced from a 35mm blowup of the film's DV master, which lends the image a solarized appearance in addition to accentuating edge haloes and any trembling of the camera. The overall look--more PAL-to-NTSC than Dogme 95--is dramatically credible in a way that pure DV is not, however (just compare the pre-converted deleted scenes to the movie proper), and those who found Open Water unbearably blotchy on the big screen should deem this a vast improvement. Meanwhile, the picture's spare sound design is somewhat oversold in duelling DTS-ES 6.1 and Dolby Digital 5.1 EX mixes, the former of which argues its case for being the superior option with a smoother timbre and less gimmicky directionality. To be honest, either one will suffice.

The remaining two audio tracks house a pair of feature-length commentaries, the first reuniting Blanchard Ryan with her co-star Daniel Travis, the second teaming writer-director Chris Kentis with his wife, producer/cinematographer Laura Lau. As the guerrilla production has already been demystified for us in the press a thousand times over, a feeling of déjà vu pervades both yakkers, although I don't believe I've ever heard an actress editorialize her own nude scene before. If Lau is exhaustingly fond of shout-outs to friends and relatives making cameo appearances in the film, at least the punchline to such antics is pretty good: after a cutaway from a toddler to a little girl, we find out that they were both the same person (Lau's daughter). Now that's what I call a lengthy shoot!

Other extras include seven deleted scenes, starting with an alternate opening that feels decidedly hasty. This section is mostly comprised of pre-dive interactions between the central couple (paving the way for a groaner of an Apocalypse Now reference where Daniel contemplates the ceiling fan of his hotel room) that probably helped to shape the performances but prove relatively inconsequential in context. Two featurettes--"The Indie Essentials: A Filmmakers Guide to Gearing Up for a Marketable Movie" (5 mins.) and "Calm Before the Storm: The Making of Open Water" (16 mins.)--are fairly self-serving on the part of Lions Gate, a studio that appears to be getting a Miramax-sized ego on the acquisitions end of things. In the making-of, Kentis admits he had not so much a driving need to tell this story as an irrepressible desire to play with cheap cameras, and shark wrangler Stuart Cove tries, probably without much success, to blend in amongst a less virile crew by wearing a hot-pink shirt. Underwhelming "bonus on-location footage with Chris Kentis" (3 mins.) and Open Water's theatrical trailer round out the DVD. Originally published: December 20, 2004.