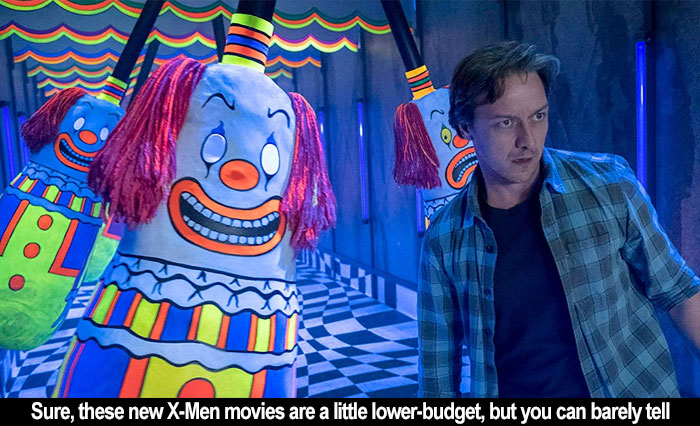 by Walter Chaw Calling the monster "It" suggests some BigBad that should not be named in polite company--molestation, suicide and depression, abandonment, abuse (domestic or otherwise)--and Andy Muschietti's It: Chapter Two (hereafter It 2) covers each of those bases, literally, along the way of what turns out to be a painfully sensitive metaphor for how the things that happen to us in childhood dig their talons into how we function as adults. Not unlike the pointedly named It Follows, It 2 is a horror film about our personal and collective loss of innocence and the many ways we unsuccessfully suppress our trauma: "It" always escapes the containers we put it into--an idea illustrated explicitly at one point in the film as a thing too big for the rituals we use to tame it magnifies in the Jungian sense and explodes in the Freudian, laying waste to our carefully-cultivated gardens. It's possible to outgrow a fear of clowns--a lot less likely that we'll ever outgrow the litany of disasters that fed the fear of clowns in the first place. My mom is dying. Dealing with it has unearthed all of these memories I'd hidden away, of our relationship and of my childhood. I'm not armed. Neither are the "losers" of It 2.

Fans of the book or the first film will remember the Losers as a group of seven misfit kids who band together to fight an evil in their hometown of Derry, Maine, an "It" that sometimes manifests as a clown calling itself "Pennywise" but just as often manifests as the kids' worst fears. It harvests its repast, then sleeps for a couple of decades: the world's worst cicada. At the end of the original, the children make a blood pact to return to Derry should It ever resurface. It 2 is It resurfacing. Mike (Chosen Jacobs as a child, Isaiah Mustafa as an adult), the only one of the friends to have stayed behind in Derry, is tasked with calling each person asking them to honour their obligation. When they answer, it's the first they've thought of that fateful summer since moving away. They've covered it over in what Eliot would call a winter of "forgetful snow"--but they all come back, save one, Stan (Wyatt Olef/Andy Bean), who kills himself in his bathtub rather than face the thing that ruined him in the past. A lot of us reach that same decision. For some of us, it wouldn't take as much to push us there.

The Losers' reunion at a Chinese restaurant is marked by bonhomie and then the slow return of their memories and mannerisms. Bill (Jaeden Martell/James McAvoy) starts to stutter again; fat kid Ben, now the picture of health (Jeremy Ray Taylor/Jay Ryan), eats too much; sick kid Eddie (Jack Dylan Grazer/James Ransome) finds he needs to get an inhaler at the pharmacy; Richie (Finn Wolfhard/Bill Hader) cuts up; Bev (Sophia Lillis/Jessica Chastain) gets tough. Only Pennywise (Bill Skarsgård) remains unchanged. Depression is like that. It never changes either. That's how you can tell it's a lie. It 2 reminds of Robert Harmon and Eric Red's The Hitcher, another great film about how depression is the only constant companion of the depressed. Sometimes it runs ahead to meet you where you're going, but it's never far: it's in all your family pictures, and all of everyone else's family's pictures. At the reunion, Bev ruminates on their friend Stan and says, simply, that Stan, the best of them, was always a little... She pauses. "Sad," she says. It's the first time I cried in It 2. I had not connected much with the Stan character in either iteration (book or film); he was always in the background. But that makes sense now. Stan is a little sad. I get that.

Returning to Derry jogs their memories as It begins to harvest more children. Children are easier to scare on a certain level, and early reactions to both this film and the first one seem to be mainly adults confirming they aren't scared and think the monster effects are too "cartoonish" to be frightening. I think Joe Dante's films are scarier and have more longevity than most of his compatriots' because his bogeys never looked "real," they looked stylized and fucked-up. The rabbit thing that comes out of the jack-in-the-box in his section of Twilight Zone: The Movie is still one of the scariest things I've ever seen. It 2 pays homage to it in a fucked-up li'l dog during the funhouse conclusion. The movie pays its respects to John Carpenter's The Thing, too, the punchline being that pop-culture geek Richie knows exactly the line that goes with the creature. It 2 even pays homage to itself in the way that King's novels began to do--long about the time of It, as it happens--when a manifestation of Bev's fear of intimate invasion cries "Here's Johnny!" while trying to batter down a door. This sequel exists in a world where Stephen King exists (and he makes a fantastic cameo here as the kind of gruff Maine townie he likes to write about--"You can affoooowd it!" he says in 100% backwoods Northeasterner).

It 2 exists in a world where Steven Spielberg exists as well; the film emulates the sense of small-town wonder Spielberg conjures so effortlessly. Spielberg and King are tied together for me--if memory serves (and it may not), at the end of the book, a witness to Derry's destruction mutters "Spielberg" to himself as the town garishly explodes with blockbuster gusto. They're savants, King and Spielberg. Both have developed a fair-I-think reputation for not being as good at endings as they are at beginnings, and both are seminal voices of a specific time and place and genre. What they do is magic and impossible to replicate, although easy to mock. It 2 looks and acts like a Spielberg film in the best ways. Its representations of the idyll of childhood are aching; its interpersonal exchanges among adults are familiar and natural. Credit an exceptional cast but credit, too, King's way with human beings. I would put King's ability to write people up against any writer from any time. While his current popularity distorts how he's perceived, I believe that time will be kind to King. (Especially his early work--and if you haven't read Desperation recently, you might be surprised how good it is.) And I think time will be kind to these two films, mainly because after the dust has settled around this two-part adaptation as a mainstream phenomenon, what people will begin to see is that it's a pastoral piece that takes an almost leisurely approach to presenting what seems like a bucolic upbringing and then infuses it with all of this century's dread. Norman fucking Rockwell, indeed.

It 2 is about a monster that is essentially this small, pathetic, frightened bully who uses the fears of children (and the mentally disabled) as sustenance. When people are able to see It as It is, it shrinks down to the size it actually is. In every way, It is the better analogue for Donald Trump than the emperor with no clothes. (It likes to scream, but it's afraid of stairs.) It 2 considers how we've allowed the proverbial monster under the bed to fester and magnify itself because we're afraid of it. We let it eat our children rather than address why it is we allow it to persist. It is school shootings and immigration lies; the need for walls and that shotgun in the closet we're many times more likely to use on ourselves and our families than on any It slavering to come steal the valueless things we've accumulated to create a persona for ourself. It 2 is finally about hope as we find it in our friends' love for us and our love for our friends. If we can't summon the courage to fight our own Its, we can at least summon it to fight others'; and if we all resist, we have a chance at surviving this. It 2 is about how everything is terrible, but there's hope strong enough to fight it if we believe in our friends. And if they believe in us.