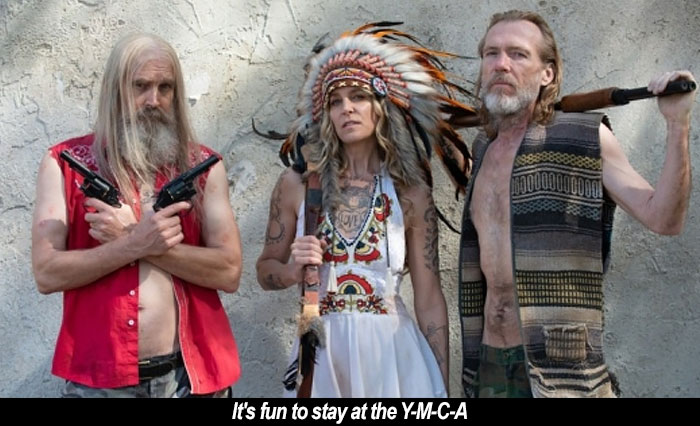 by Walter Chaw 3 From Hell's twin fathers are Sam Peckinpah and Jim Thompson; when Baby (Sheri Moon Zombie) screams "Kill em, kill em all!" in obvious emulation of that iconic early moment in The Wild Bunch, she announces that the picture's setting in a disgusting Mexican villa is not just purposeful, but meaningful and pointed. In scope, the film is better framed as Rob Zombie's The Getaway, which, as may be expected, keeps the surreal, cannibalistic ending from the novel, unlike either of its proper adaptations. Indeed, 3 From Hell is as sordid, violent, base as anything from Peckinpah or Thompson; and an observant a satire of how the world runs on the threat of violence and the promise of sex. Likewise, it's steeped in self-loathing, that sense that everything is in an active state of putrefaction. If The Getaway can be read with profit as a film about the transactional nature of human relationships, Zombie's films are also best considered as detailed, acutely sensitive explorations of human, especially familial, relationships. 3 From Hell is his most pointed statement about the nigh insurmountable cost of existence. The marriage makes sense, as life is never cheap in Zombie's films. In fact, life and the living of it, is really fucking expensive, and no one gets out alive.

Consider the machinations behind Otis (Bill Moseley) and Baby's deliverance from bondage as the film opens: the one settling a barely-remembered score, the other the product of a hostage exchange engaged in absolute bad faith. Every relationship is curated with a price and a consequence. (In thematic intent, it's not unlike Hitchcock's pitch-black consumerist satire North by Northwest, in which the hero's mother is branded with a phone number, "Butterfield-8", shared with a notorious hooker.) The horror of the central "Firefly" family, stars of House of 1000 Corpses and The Devil's Rejects, is that they manipulate accepted rules of commerce for their own design. They are unbound. The horror of these films is our understanding of exactly how incorruptible they are, in a sense, and, by extension, how invulnerable they are to the very notions of Capitalism that enslave us. The entire idea of "fairness" is foreign to them. They're supernatural beings. A late scene where a duplicitous hotel manager (Richard Edson, extraordinary) offers to split his thirty pieces of silver with Otis "70/30" in exchange for his freedom ends, predictably, not well. Otis doesn't even look for the money after he's done. He's not unlike Norman Bates in that way, sinking Marion Crane's pilfered forty grand in the swamp with her corpse. The wonder of both movies is you spend time wishing they'd look for it. What sort of monster couldn't use a few grand?

Baby is the star of this show, her time in prison after the events of The Devil's Rejects affecting something like a sea change in her personality. Otis tells his half-brother Coltrane (Richard Brake), a character written into the film after Sid Haig became too ill to reprise his Captain Spaulding role beyond essentially a cameo during the protracted opening, that if he knew Baby like he knew Baby, he'd know she was different. We know she's different because she has a Lynchian fantasy of a dancing, anthropomorphic cat behind a grate in her prison cell--a "kitty" she identifies with during one fraught exchange with preening prison warden Harper (Jeff Daniel Phillips). Already nuts, she's experienced something like a psychotic break in 3 From Hell, and her distance from societal norms has increased exponentially. On the lam outside a hotel, Baby offers something in exchange for a grape soda. Later, we see a mordant tableau mort with the word "grape" carved into someone's forehead. She represents a complete misunderstanding of social contracts. When she "guts" a naked woman on a suburban lawn, she finishes off by waving to an old woman on a lawn chair in a friendly-neighbour sort of way. The best scene of the film involves Baby and Sebastian (Pancho Moler), an attendant at the hotel where our antiheroes have ensconced themselves. He brings her a breakfast of beans and rice and, in a relationship parallel to Quasimodo and Esmerelda, Baby shows an extraordinary degree of kindness and empathy. It's a beautiful scene, a precious scene, even, and Sheri Moon is absolutely the equal of it.

The violence in Zombie's films is extreme, it's true, but it's leavened with terrible consequence. Husbands watch wives slaughtered, wives watch husbands impotent to change their fate. Invoking The Desperate Hours in a Tarantino-esque dialogue about the difference between Cagney and Bogart, 3 From Hell is very much The Desperate Hours if that film were a Michael Haneke punishment. Our trio is hunted in their filthy border town haven by the son of one of their victims (Emilio Rivera), the head of a gang called the "Black Satans," which is fond of luchador masks and automatic weapons. It all ends in a showdown, of course, a fascinating one in which Baby dons a stolen Native American headdress and wields a bow and arrow. Loaded iconography, to be sure, this idea that our nation is founded on broken contracts and bad-faith negotiations--and it's this legacy that paints our character and threatens at any moment to erupt from our recent past. Baby, then, is a complicated product of our diseased social structure. Zombie's heroes are insane because they slaughter people, sure, but more because they're impossible to quantify using accepted strategies. They can't be negotiated with because they don't need anything. They can't be caught because they don't have a plan. They're ambivalent figures because it's no sure thing in Zombie's films that "fitting into" a broken society is in any way a good thing.

Zombie is an auteur in every sense of the term. He has a specific vision, an instantly-recognizable voice, and a stable of actors who reliably play it all out. 3 From Hell is smart and committed exploitation filmmaking--discomfiting and surreal and fully-engaged in creating a universe where the only way to win is not to play. The picture functions as the shadow to Tarantino's Once Upon a Time...in Hollywood in some ways, painting an alternate universe in which Manson gets away with everything, breaks out of prison, and rampages through the country, riding waves of madness, blood, and lust. It's a pungent, filthy, feel-bad film that has at its heart a family that cares about each other and a madwoman who recognizes the nobility and necessity of monsters. Zombie stirs the pot, and if his work is doomed not to be fully appreciated in his time, it's consistent and smart enough for an eventual reconsideration. Lords of Salem is his masterpiece--one of the finest portraits of depression I've ever seen captured on film--but there's a story unfolding of who we are at this moment in our history when considering his work as a whole. Should we survive it, it's a complete journal of our plague years, and essential for it.