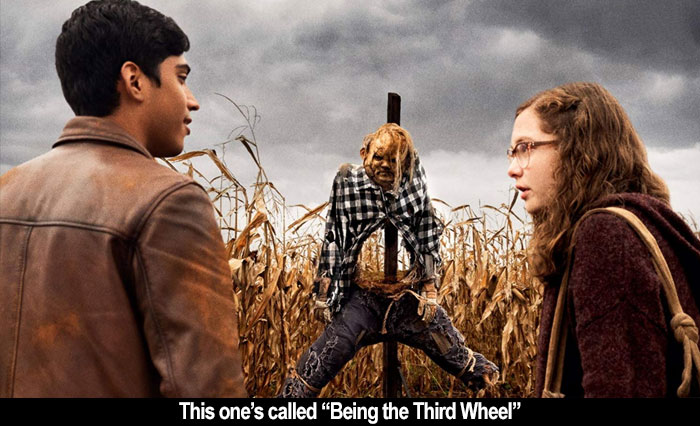 by Walter Chaw André Øvredal's Scary Stories to Tell in the Dark (hereafter Scary Stories) is a dulcet, autumnal picture balanced right there between the endless summers of dandelion wine and the interminable and harsh winters of brutality that lie ahead. A project based on a beloved series of children's books by Alvin Schwartz, it transcends its source by understanding the true function of little nightmares: the stories we tell our kids to begin to toughen them up for lives spent in this hell. Scary Stories unfolds, essentially, in the days between Halloween, 1968 and Election Night (November 5th) of that same year, when Richard Nixon won the Presidency on a date that disrupted 36 years of New Deal expansion. Hubert Humphrey was the Democratic nominee, but only after Bobby was shot (just a short while after Martin Luther King, Jr. was shot); the beheading of the Democratic party's progressive soul was now complete. George Wallace, a piece of shit still somehow not as repugnant as Donald Trump, carried five states that night by promising racial segregation. Old footage of Walter Kronkite delivering the results of the election provides the background for a young woman, Stella (Zoe Margaret Colletti), trying in vain to convince the adults that things are not going to be okay before calling her recently-widowed dad to tell him that all the disappointments of the world are not his alone to carry. It would be instructive to watch Scary Stories as the warm-up feature for Once Upon a Time...in Hollywood. Both occupy the same dream-space, the same halcyon "the past" where everything is possible until it isn't anymore. The surprise is that of the two films, it's Scary Stories that is the less hopeful.

The Draft is the first bogey of Scary Stories. It spreads its fingers over the one-horse town where Stella lives with her misfit buddies Chuck (Austin Zajur) and Auggie (Gabriel Rush)--Auggie, who dresses for Halloween as Pierrot, a mime from commedia dell'arte the locals understandably interpret as a stupid clown costume. There's a bully, Tommy (Austin Abrams), who celebrates enlisting, warning the Vietnamese to watch their asses. We know he's doomed. So are other boys of draft age we see, trapped now in a cycle of Orwellian forever wars where our chief form of collective cathartic entertainment comes in the form of viral videos of not-dead soldiers surprising their abandoned children with their presence. (The mere idea of a young man celebrating being next in line to the slaughter inspires less horror than resignation.) When all's said and done, Scary Stories is about the snuffing-out of generations of hopefulness by an industrial machine solipsistically interested in its own enrichment. The framing story revolves around the discovery in the old, haunted Bellows House, a journal kept by poor, mad, long-dead Sarah Bellows (Kathleen Pollard), who, it was rumoured, poisoned a bunch of children. Turns out, it's her family's business that put lead in the water and eventually drove Sarah mad, the better to make her the scapegoat for their business's sins. This film, it bears repeating, is shockingly topical.

Stella, an aspiring writer, steals Sarah's journal to find it automatically filling its pages with new stories, these ones starring Stella and her friends. There's a wonderful scene where she and her maybe-boyfriend Ramon (Michael Garza) try, unsuccessfully, ripping out pages to stop the tales to no avail, the stories continuing on subsequent pages, breakneck, helter-skelter. The way Overdal shoots it is like a chase sequence: the kids trying to outrun the writing, the writing steadily outpacing them. Another great moment sees Stella, over a walkie-talkie, attempting to stop Auggie from eating a bad stew. Alas, he's a teenage boy, stubborn and hungry and tired of getting picked on by his friends. The inability to escape is the heart of Scary Stories' terror. It's not unlike the kid's version of It Follows in that way--the real tragedy of innocence is that it never doesn't become stained by experience. The kids try to deal with their discoveries on their own because the cops have been harassing Ramon since his appearance in town. They favour the bullies and other idiots over Mexican Ramon, you see, and both remedies provided by the picture (the smart girl, the Mexican boy) are seen as unreliable at best by the authorities. At worst, Stella and Ramon are subversive creatures--like the RFKs and JFKs and Medgar Everses and MLKs--better suited for a casket. Scary Stories says there's nothing that matters save telling the right stories. It's a call to arms to the resistance that doesn't necessarily believe it can save anyone yet pushes the idea that it's meaningful to be on the record all the same. It's also scary--not just the faithful recreations of Stephen Gammell's illustrations, which are fun and elastic à la Pennywise in the child's eye of It, but also in the unbearable weight of the world as it turns its challenge to the kids now that the adults have been rendered mute, impotent, listless. I wonder if anyone's listening.