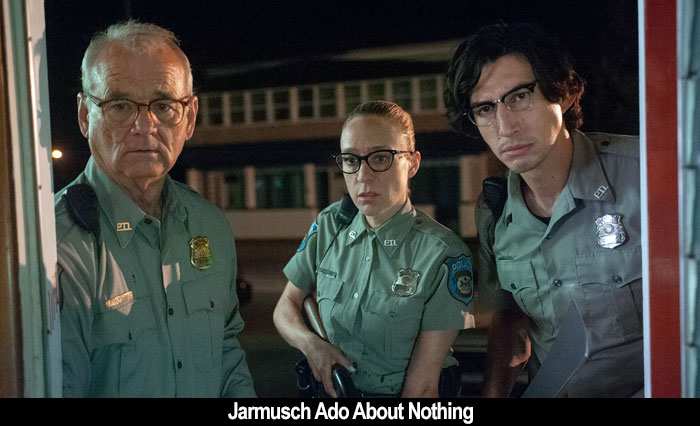 by Walter Chaw SPOILER WARNING IN EFFECT. Near the end of Jim Jarmusch's The Dead Don't Die, Centerville police chief Cliff Robertson (Bill Murray)--probably named after legendary everyman actor Cliff Robertson just because--intones to his deputy Ronnie Peterson (Adam Driver)--probably named after legendary Formula 1 driver Ronnie Peterson just because--that Jim Jarmusch is a dick. He's responding to Ronnie's revelation that Jim has let him read the entire script while only letting Cliff read certain scenes. Luigi Pirandello did shit like this in his exhausting, wall-breaking, self-referential stuff. He believed the actor would inevitably break with the text and so, in his most famous play, "Six Characters in Search of an Author", he has them reject their script and question their existence. A forerunner to the Theatre of the Absurd, Pirandello was held in some esteem (and met with an equal amount of suspicion) by Mussolini--you can read into the rebellion of his fictional characters from their fictional circumstances a hint of his true allegiances. It's timely, given our current fascist circumstances, for Jarmusch to evoke Pirandello, I guess, and other modern examples like Daffy Duck's "Duck Amuck" short and Grant Morrison's "Coyote Gospel" one-shot in the late-'90s Vertigo run of "Animal Man" support the playwright's case for immortality. But it's hard to get too excited when the execution is this pleased with itself. The conceit (much like when Moriarty became sentient on the Holodeck in that one episode of "Star Trek: The Next Generation") is ever in danger of pomposity and self-parody. Jarmusch, who already mucks around in narrative grey areas--such as conceiving of a poet/bus driver named Paterson who lives in Paterson, NJ and reveres a book of poetry by William Carlos Williams called, that's right, Paterson--doesn't need to get so granular about it. The Dead Don't Die plays an awful lot like Jarmusch explaining Jarmusch to a slow child.

Maybe the problem is that Jarmusch, not content with messing around with Pirandello, additionally messes around with Ionesco, a French Avant-Garde playwright (perhaps the French Avant-Garde playwright) who eschewed traditional narrative forms for repetitive modals where language, including and especially clichés, assume prime, manifest importance. Shoving Italian Theatre of the Absurd into French Avant-Garde is a really bad idea. The likelihood the marriage will be anything other than confused at best, pretentious at least, is tiny. Maybe the problem with The Dead Don't Die is that it's the first Jim Jarmusch film to feel elderly and shouty. It's the aging hippie ranting about how disengaged this new generation is, using modern examples in bad faith and tedious as a consequence almost immediately. It's the patronizing old guy who doesn't realize that everything he's saying was already said more eloquently by the very things he's attacking in his arch, superior way--the dude telling the woman about this book he's read and ignoring her constant protestations that she's the author of said book. Oh man, is it bad.

The thesis of the film is something along the lines of 'modern life has turned everyone into zombies,' making the onset of a zombie invasion something no one can get too worked up about. The cause this time around is "polar fracking," which a few television talking-heads praise for the jobs it's created. Sure, it's also knocked the earth off its axis, resulting in a plague of the walking dead, but look at these youngsters glued to their smartphones. There's a weird gas-station attendant named Bobby (Caleb Landry Jones) who also sells action figures and stuff. Everyone calls him "Frodo" or "Bilbo" because Ionesco and pop culture and, wouldn't you know it, Baudrillard (whose best work was in the '80s, meaning we're edging ever closer to "hip"). Anyway, some hipster scum from Cleveland arrive, mock Bilbo, and ask if there are a lot of zombies around or something while holding a box of zombie action figures.

There are many supportable theories about why zombies are popular now and why they were in the late-1960s as well. How they function as a metaphor for the proliferation of white evangelism and white nationalism, for instance, or how they represent the culturally-evolved phenomena of "behavioural sink," which explains that capitalism's endgame is this extreme resource dichotomy leading eventually to literal cannibalism. George Romero's Dawn of the Dead--and Romero is name-dropped in The Dead Don't Die, because of course he would be--had the one good idea that the undead would be attracted to the same things they were in life. (Hence the shopping centre and the bank.) Jarmusch riffs on this in a senior way by having his zombies say single, dear words like "coffee" or "WiFi" or "Snapple." Is that funny or insightful? Is it even a riff if it's the same gag? The Dead Don't Die seems to think it's very witty. Also witty is having the cops--Cliff, Ronnie, and poor, sorta hysterical Mindy (Chloë Sevigny)--deliver their lines in flat, unaffected readings that work extraordinarily well in Jarmusch's other films (he's our very own Roy Andersson), but here play as thematic puffery. We're all deadpan Neros fiddling as the world burns, see? And it's already too late to do anything about it.

Tom Waits perfects his ongoing mission to be cast as a weird homeless guy any time he appears in something, his Hermit Bob providing a Greek Chorus I would've been really excited about in high school. The whole project has the same sort of vibe as Pink Floyd's "The Wall" concert, frankly: politically well-meaning and on the right side of things, for the most part, but pedantic in that particular way of adolescent activists and the forever-outraged. Take the MAGAt character Farmer Miller (Steve Buscemi), who wears a "Keep America White Again" hat (clever!) and is forced to murder a black zombie on his doorstep. "I killed him," he says. "Weird!" Except that it's not weird, it's a giant missed opportunity to have this person indoctrinated in fear of the other actually confront the manifestation of that fear and assess whether that reality is foregrounded, or if his friendship with affable Hank (Danny Glover) should be foregrounded instead. By tossing it off, Jarmusch indicates he's above it--a proud citizen of this Centerville he's created. Consider Tilda Swinton's alien coroner Zelda Winston (haha), a literal alien who "phones home" in the middle of this mess to get tractor-beamed back onto her mothership--but not before displaying her otherworldly skill with a katana. It's all just so depressing. A single joke stretched to feature-length, The Dead Don't Die asks a few of the most interesting actors on the planet to perform in the middle-school ecology pageant. Destined to be loved and recommended by your friend's older dad who works in the department of forestry and thinks everyone under thirty should see it, The Dead Don't Die isn't a bummer for its message, but for its fatalism and lack of faith in you. Maybe it's reverse psychology. Maybe it's just terrible.