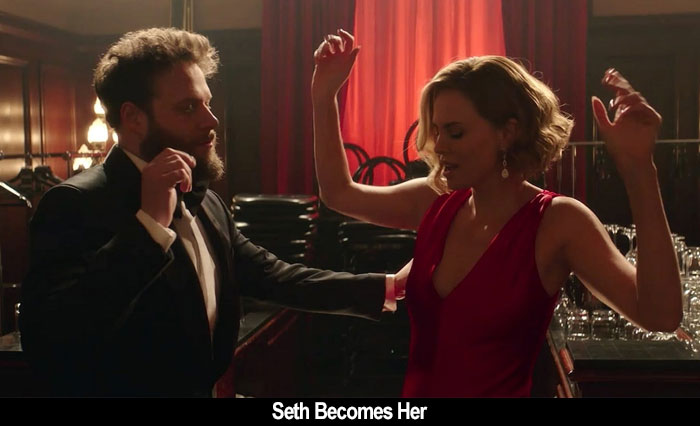 by Walter Chaw Long Shot sort of wants to be There's Something About Mary and sort of wants to be Broadcast News but mostly it's a Legal Eagles/Switching Channels '80s adult programmer that is deeply embarrassing and often difficult to watch. The fact that we don't make a lot of movies like this anymore, if indeed we ever did, should be indication enough that it's harder than it looks. Long Shot is "Veep" without edge, intelligence, relevance. It takes aim at Fox News and manages to nail the misogyny in a broad, improv-troupe way while failing to capture what it is about the network that has led us to the precipice of the end of the Republic. Yes, no kidding. Long Shot doesn't have anything to say about politics beyond the polite broadsides you hear at middle-school debate tournaments, and though it introduces a vile Rupert Murdoch-inspired media mogul intent on disrupting the American election process, it misses every opportunity to land a blow against him. It's like taking a swing at the ocean as you're falling out of a boat--and missing. The film is a disaster in regards to race relationships and representation, so much so that it's a marvel of lack of introspection that this liliest-white of lily-white movies even attempts to address it. Long Shot is the thing that thinks it's helping but isn't helping at all. It is, in other words, the frontrunner for next year's Best Picture Oscar. You heard it here first.

The picture opens at an aggressively atonal white-supremacist rally, where undercover journo Fred Flarsky (Seth Rogan) goes for laughs by having a hard time doing the Nazi salute a couple of times and making ouchy-noises while getting a swastika tattoo. It's the way movies like the Tom Hanks/Dan Aykroyd Dragnet used to open--or Exit to Eden, or that sequel to Stakeout. Movies are empathy machines, but Long Shot is basically just a reminder of an era in film I've tried to suppress. Fred Flam-Flim Flars Flas Flarsky finds out that evil billionaire Parker Wembley (Andy Serkis) has acquired the publication he writes for and promptly quits out of principle. He goes crying to his best friend Lance (O'Shea Jackson, Jr.), who takes him to a private performance by Boyz II Men where, lo, his old babysitter, Secretary of State Charlotte Field (Charlize Theron), is enjoying herself. Lance talks about how he and the Boyz are the only black people at the party before facilitating Lance's reunion with Charlotte. (A moment to note that Lisa Kudrow makes a quick appearance as an image consultant for Charlotte, reminding mostly that Kudrow should've starred in this film--with no disrespect to Theron, who does her very best.) Fred Flum-Flakly's publisher is an Asian guy (Randall Park) called upon to grimace at Fred's righteous schtick and dick jokes. He tells Fred that his protest against Wembley is pyrrhic, and he's absolutely right. Long Shot has lots of moments like this, where they step in it, then try to walk it back. It's a risky gambit that doesn't pay off.

Charlotte has two advisors, crude ball-breaker Maggie (June Diane Raphael) and Tom (Ravi Patel); neither is as snappily-written as Julia Louis-Dreyfus's retinue on "Veep". The film takes pains to touch on the double-standard afforded women in the public sphere and then does this weird thing with a loathsome advisor and a too-sympathetic Canadian Premier played by Alexander Skarsgård, who's also been coached on how to be more attractive. The point seems to be that women have a hard time maintaining a certain acceptable public appearance and…and so do men? Long Shot's premise, of course--it's right there in the title--is that Fred is about a 3 and Charlotte is about a 10, and just like that, the movie is the unsexy version of "10", the less funny version of Hitch. Charlotte, because they grew up together, hires Fred to write her speeches for her because she needs to be funnier and Fred is funny. I don't know how she would know that from his articles on the White Power movement unless they were hilarious, but Seth Rogan is hilarious, so let's go with it. Anyhow, they fall in love, survive an insurgent attack in a foreign embassy, and start fucking in various scenarios that allow Charlotte to talk dirty and then apologize for the power-dynamic discomfort it causes. It's bullshit. The cheap kind. Like the scene on the beach their first morning-after, where Fred has an exchange with an ugly Secret Service guy who tells him to go for it on behalf of all the choads out there.

The best part of the film, though, is when Lance, the one who complains that a Boyz II Men party is "one of the brightest rooms I've ever been in in my life," reveals himself to be a Republican. He rejects Fred's declaration that the Republican Party has lost its way by giving a "both sides" argument. Lance, you see, is a successful businessperson, meaning conservatism has worked well for him so far. Lance is also a gold-cross-wearing Christian. Lance thinks Fred is too judgmental and that's why he's ruining his relationship with Charlotte. Charlotte, now running for President, gives one of those speeches that men usually give in terrible movies like this, right after riding a horse onto a bridge or into an airport or something. Long Shot is that kind of movie. Lacking imagination, it constantly bites off more than it can chew. It's easier to locate the "hot button" than it is to defuse it. Fred and Charlotte learn from each other: she about experiencing life more fully; he about seeing the good in Republican Party platforms or something. There's a Roxette song, a Boss song, a slow cover of a Cure song ("Close to Me"), stuff that tries to shock but doesn't, and stuff that tugs at the heartstrings but pulls on the gorge instead. Remember Whiskey Tango Foxtrot? That's okay, you won't remember this one, either.