Hot Docs '19: On the President's Orders 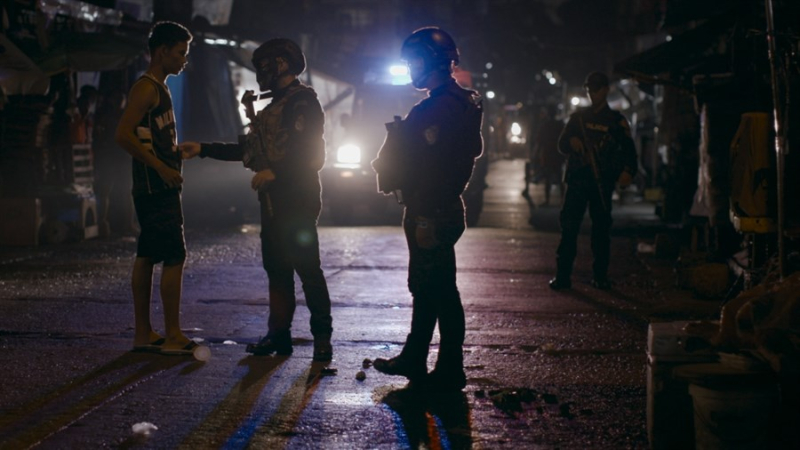 by Bill Chambers A co-production of ARTE France and PBS's "Frontline", On the President's Orders covers a period of relative calm in Duterte's Philippine Drug War, which saw a death toll of 3,000 suspected drug pushers in its first year. In an effort to curtail the amount of bloodshed on both sides, Jemar Modequillo is installed as the new police chief in Manila's Caloocan district, the epicentre of the country's drug-related violence, and sets to work remolding the trigger-happy "wankers" under his command into a constabulary that patrols the seediest streets in search of alleged suspects to haul off to a seriously overpopulated jail. As we see, there is little distinction made between dealers and users (who typically aren't motivated enough to sell drugs), and a profound lack of empathy for addicts in general among members of law enforcement. "Drug users are a nuisance for society. Unless you get rid of a pest, it will get bigger," says the prison warden, Agustin, who gets his jollies out of hurting the detainees and isn't shy about it on camera. 'On the president's orders,' in other words, Modequillo created his own version of ICE, substituting junkies for migrants--and on one level, the film feels as if it's intended as a counterweight to Trump's characteristically mindless praise of fellow media-hating despot Duterte at a 2017 summit in Manila. On another level, like a lot of current documentaries (including the two I've already covered for this year's Hot Docs), On the President's Orders suggests a creative solution to critiquing a subject who's just too overexposed and partisan for any documentarian to have a real shot at being heard. We're in a redux of the Bush era, in that sense.

Inevitably, a ceasefire may look good in the eyes of the International Criminal Court, but it doesn't generate the kind of statistics that gratify warmongers like Duterte (who compares himself to Hitler and means it as a compliment), and On the President's Orders finds the consummate allegory for this in a mortician who lingers on the sidelines like an Old West undertaker, griping throughout that he's not getting as much work as he used to until a late-film escalation in drive-by shootings means "business is booming" again. Indeed, there's a very conscious design to the piece--an opening image of Modequillo carrying a cross in a parade heralds the arrival of a saviour in town, for instance, but when it boomerangs back as a bookend, the context changes the tone of it and suddenly it looks like the now-fired Modequillo is doing the Walk of Shame (it's almost a lesson in the Kuleshov effect)--that's not necessarily unwelcome, though it may have some viewers side-eyeing co-director Olivier Sarbil's cinematography, in particular. On the President's Orders is often a beautifully lit film, custom for establishing and insert shots in documentaries but surprising when the victim of police harassment is in perfect chiaroscuro and artfully framed in the picture's 2.35:1 aspect ratio. One starts to think of the serendipity of it all. Programme: World Showcase