by Bryant Frazer A mere 13 years have passed since Crank tumbled roughly onto multiplex screens, but the film has not aged particularly well. In 2006, its down-and-dirty action aesthetic seemed almost futuristic, thanks to filmmakers Mark Neveldine and Brian Taylor and their embrace of portable HiDef cameras, death-defying handheld camerawork, and aggressive, boundary-pushing visual style. But cinematic techniques have moved on, with ever-more-agile digital cameras making it easier than ever for action mavens to get tack-sharp images from impossible angles. Crank's stuntwork, much of it performed by the stars themselves, remains impressive, but it's pretty small beer compared to the latest instalments in state-of-the-art action franchises like Mission: Impossible and John Wick, which share Crank's daredevil aesthetic but eschew its rude, HDCAM-level physicality in favour of spectacular digital cinematography fit for enormous IMAX screens.

If Crank still has a certain feisty grubbiness going for it, well, even that doesn't go down so well in 2019. This film has a mean streak a mile long and, as Walter Chaw pointed out when this originally hit DVD in 2007, it runs roughshod over anyone who isn't a white male. If you feel that representation matters, a lot of this film will have you on edge. It's not that Jason Statham's Chev Chelios, a meathead injected with a poison that will kill him should his ensuing adrenaline rush ever slow down, should be a nice guy, or that the Los Angeles underworld shouldn't be full of gangsters of every ethnicity with a gun and a hustle. There's just something unsettling about the use of race as a consistent signifier of the enemy or at least the Other, starting with the identification of the poison in question as a Chinese toxin and Chev's decision early on to pick a fight at a black biker bar to keep his heart racing. Of course, Chev's doctor, Miles (Dwight Yoakam), and his girlfriend, Eve (Amy Smart, very funny in a thankless role), are both as pale as a butterscotch sundae. Chev's buddy Kaylo (Efren Ramirez) is the only trustworthy person of colour on screen--until he's horrifically dispatched by Chev's Asian antagonists.

Beyond all that, Crank is undeniably entertaining and audacious. It includes a wonderful set-piece in a hospital where Chev bullies a doctor into defibrillating him as the police close in. There's a borderline-pornographic scene set in an open-air Chinatown market that closes on such a sex-positive note I really wish it didn't begin by declaring it's not rape if the woman likes it. Too, Crank does stick the landing, so to speak, ending on an oddly touching magic-realist note. It's Eve, however, who seems to write the final words in the saga of Chev Chelios--at least until the arrival of Crank: High Voltage three years later. After all, Smart is Crank's best feature. The film perks up considerably when she arrives on screen, working in some lovely bits of physical comedy that make the most of her rote characterization. And when her Eve makes the semi-playful but completely on-the-nose declaration, "You're like an adrenaline junkie with no soul," I have to wonder whether it's Chev or the cheering audience itself she's nailing to the wall. 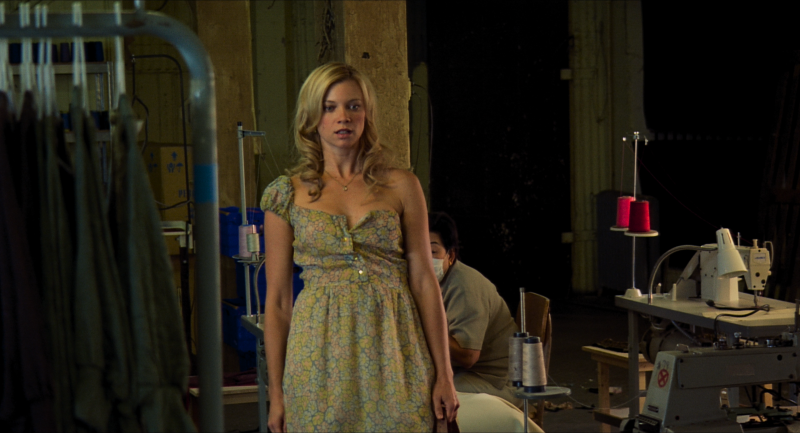 THE 4K UHD DISC
Crank's appearance on UHD BD proves that it's a strong home-video performer for Lionsgate, which has been handing out new HDR UHD transfers to an interesting slate of catalogue titles. That's usually a welcome development, but Crank was shot mostly in HD--very good HD, but still HD. Is there any point in producing a 4K version of a movie that originated at slightly less than 2K resolution? On the evidence here, the endeavour is questionable. The best possible way to make a 4K version of Crank would involve returning to the HDCAM footage and upscaling it using the best processes available today. Unfortunately, a lot of fundamental work on Crank's picture that was done in post-production--various colour-corrections, digital zooms, warp effects, and the like--would have to be retrieved (or reproduced, frame by frame) and conformed to the new, higher-resolution version of the footage. Such a task would be prohibitively expensive, if not impossible for a heavily manipulated title like Crank. So what we get instead is sourced not from those original files but from a "film out"--a scan of a 35mm film element on which the manipulated digital frames have been recorded. You can tell this is the case by the occasional appearance of tiny flecks of dirt and scratches on screen. And because those flecks are dark instead of light, my assumption is that the 35mm source was a print or an interpositive element, suggesting it's at least one generation removed from the original film-out negative.

Enough about the disc's provenance. Given the inherent limitations of the available source material, is this 2160p transfer the best possible rendition of Crank? Well...yes and no. The previous Blu-ray release actually gives this UHD BD version a good run for its money. The most distinctive characteristic of the HDR UHD transfer is its extremely high contrast. The blacks are inky, with shapes and textures barely perceptible in the low end of the image, while whites are blazing and highlights in a scene are often blown-out. In other words, when Chelios interrogates Orlando at the Sin City Deciples motorcycle club, Statham's head is basically a big dark blur silhouetted against a window that makes a big light blur. Yes, Crank has always had its visual limitations--the HD cameras of the time weren't great at retaining highlight detail--but the Dolby Vision encoding on this disc really tests the latitude available in the original footage, even as the extended colour dynamics lend the film a more intense feel compared to the somewhat paler BD. Crank makes for a moodier film in this presentation, to be sure, yet it's also demanding viewing--you'll want a darkened room and a carefully-adjusted display to get the most out of this picture. Even then, I'm not sure that some of the shadow detail didn't get crushed out entirely.

Side-by-side comparisons of individual frames (1, 2) show that a few details (minor details, but details nonetheless) clearly visible in the earlier BD version are utterly obscure here. Some of that, I feel, can be attributed to aggressive digital sharpening techniques on the earlier version; as evidence, I cite the visible halos around high-contrast edges on the BD, an unwelcome artifact eliminated or at least mitigated on this UHD version, depending on which shot you're looking at. The UHD version also better reproduces the grain of the film print and boasts fewer artifacts, while the darker tone probably serves to hide some ugly sensor-pattern noise from the digital cameras. I'm not sure what to make of the apparent softness of the new transfer--the picture does seem less aggressively processed overall, though I wonder if digital-noise reduction was cranked up in an effort to reduce some grodiness that became more obvious in UHD, like the aforementioned low-light grittiness and fixed-pattern noise (horizontal lines generated by the photosites on a camera's digital sensor) I detected on occasion. Truthfully, I'm reluctant to criticize the image too harshly for its darkness or lack of sharpness because it's hard to tell what the raw 4K scans looked like (especially with the application of HDR, which can interact harshly with grain and other noise), and thus what the colorist may have been working to correct. Reasonable people can disagree on the best way to approach the problem (or problems, more likely) inherent in any given shot, and I suspect tough calls had to be made.* Finally, if it matters, the UHD BD slightly (albeit correctly) mattes the film to its theatrical aspect ratio of 1.85:1, while the original BD was transferred at the film's native 1.77:1 aspect ratio.

The UHD BD's audio is a more straightforward story. The familiar 5.1 Dolby Digital EX track gets upgraded to Dolby Atmos. Unfortunately, I'm not equipped for Atmos, but the disc sounds just great in 7.1. While the mix is bright and aggressive in timbre, unlike some action-movie soundtracks it never overwhelms itself with booming bass or wild multichannel clamour for the sake of it. Sound designer Eric Lindemann (The Matrix) ensures the many individual elements flying around the room remain distinct and tied to the action on screen, using Paul Haslinger's bass- and percussion-heavy score to hold everything together. Further, the film's corniest needle-drops (Quiet Riot's "Metal Health," Loverboy's "Turn Me Loose") ring through loud and clear. It's a good time.

Despite an odd press-release claim to the contrary, there's nothing new in the UHD BD's special features, all ported over from the earlier BD release. They are: "Shooting Crank" (7 mins.), which mainly considers how Neveldine and Taylor took advantage of HD cameras to shoot more footage than they could have afforded if they'd had to pay for film; "The Stunts of Crank" (17 mins.), in which stunt coordinator Darrin Prescott remembers being grilled by Statham about his safety measures, along with some nifty footage of Taylor, bearing a huge, heavy backpack loaded with the required recording equipment, capturing shots on roller blades; "Pushing Crank" (6 mins.), wherein the film's online marketing campaign ("We talked to the big MySpace users," notes Lakeshore Entertainment marketing guru Brendan Kane) is posited as one of the first of its kind; "Crank @ Comic-Con" (11 mins.), a testimony to a film studio's ability to pack eager fans into a conference room to hear filmmakers talk about a movie they haven't seen and won't be able to see for another six weeks; and, finally, "More Stories from Crank" (25 mins.), a kind of catch-all for talking-head snippets from the directors that didn't befit any of the other supplements. (Alas, the most interesting and information-rich supplement created for Crank, the selectable Crank'd Out Movie Mode with picture-in-picture commentary and B-roll running alongside the film, is on the BD only.) Neveldine and Taylor come off as clever filmmakers, but maybe a bit too self-satisfied--the revelation that they cajoled their actors into performing certain stunts by implying that anyone who had second thoughts was a "pussy" is an amusing story, I guess, but boy howdy will these guys regret it if a stunt ever goes seriously wrong on one of their sets.

Bottom line question: is this UHD BD of Crank an improvement on the BD proper? I'm sort of on the fence. I definitely don't remember the theatrical presentation looking as murky as the UHD version suggests. And, while I recognize that the UHD transfer may be a cleaner, more accurate presentation of the source material, it's hard to deny that the earlier BD looks really good and maybe even better--brighter on the low end, crisper, and with more apparent detail despite some glaring artifacts. Fortunately for new buyers, the 4K UHD package contains the original BD right in the box (along with a download code for the movie), so you can always downgrade if it suits your fancy. I'd say, then, that it's a harder call for Crank lovers who already own that BD. But be warned: if you're solely on the lookout for titles that will show off your fancy HDR-capable TV to its best advantage, this one is unlikely to turn your crank. 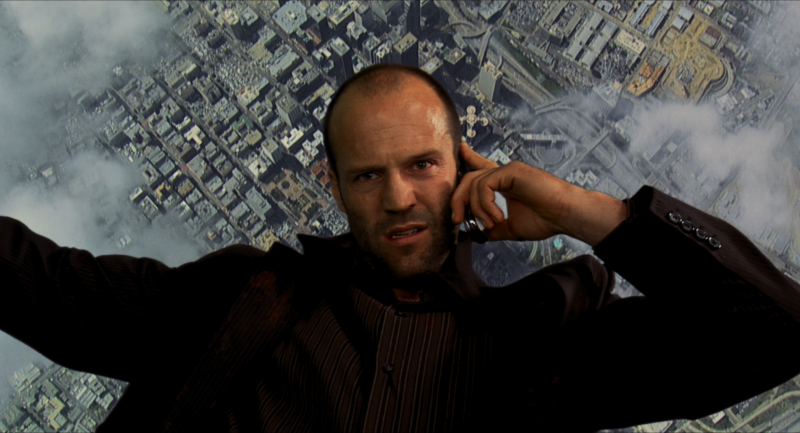 *There is just one scene in the whole film that was indeed shot on film. It's a slow-motion shot, taken through a long lens, of Statham walking purposefully towards camera--and, boy, does it show. I actually sat bolt upright on my couch because it looked so much better than anything else in the movie.