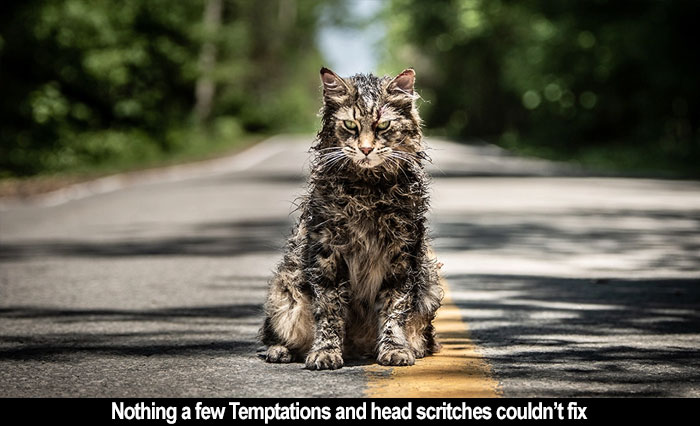 by Walter Chaw SPOILER WARNING IN EFFECT. The best adaptations understand the totality of an author's work, while the worst try to drag something kicking and screaming from one medium into another, largely incompatible, medium. The famous Frank Zappa quote--writing about music is like dancing about architecture--applies, except that it is possible to dance about architecture if you're a brilliant dancer and understand the essence of the architecture you're taking as inspiration. I think Zappa knew that, being Zappa. I like to believe he actually meant that it's possible, but hard. Stephen King's Pet Sematary is exceptional. I reread it for the first time in thirty-three years before watching the new adaptation from co-directors Kevin Kölsch and Dennis Widmyer. I remember, as a child of thirteen, the visceral fear of those last twenty pages or so (and the hot sex scene); now I'll remember it for the extraordinarily observant and sensitive portrayal of grief and loneliness in the novel's first couple-hundred pages. Indeed, the first sentence, talking about how men sometimes meet the man who should have been their father in the middle of their lives, immediately reduced me to tears. Both the Lambert and the Kölsch/Widmyer adaptations focus on the twenty-page payoff, not the two-hundred pages of poetry.

Still, Mary Lambert's affectionately-remembered 1989 film does a slightly better job of humanizing its characters--enough to forgive in the rearview its otherwise mortal pacing, performance, and script issues. Fred Gwynne's folksy, warm, manifold take on next-door neighbour Jud Crandall is one of the '80s great mentor characters, something John Lithgow in this iteration never really has a chance to match. What Kölsch/Widmyer's picture lacks is a single relationship that registers as loving or complicated. No one really acts like a person in this Pet Sematary, just pieces moved around perfunctorily by the impersonal needs of a clockwork plot mechanism. Late in the game, a major character leaves for no coherent reason, then returns for no coherent reason aside from the film thinking it needs her to do so--but it doesn't. Worse, because not enough has been done to humanize anyone, there aren't any stakes to anyone's position in the narrative. She didn't need to leave, she doesn't need to come back, and the script's inability to explain either action illustrates the corner into which the film's painted itself. If there aren't people in trouble, who cares what happens to them?

Louis Creed (Jason Clarke) is a university doctor who has moved his family to rural Maine for some hazy reason. His long-suffering wife, Rachel (Amy Seimetz--just so, so good), stays at home with daughter Ellie (Jeté Laurence) and toddler Gage (twins Hugo and Lucas Lavoie) while dealing with some post-traumatic stress over the childhood death of her big sister, Zelda (Alyssa Levine). Between this and Mike Flanagan's "The Haunting of Hill House", it's been a bad run for dumbwaiters as Rachel, whenever something bad happens, thinks she hears her family's ancient food elevator cranking up. It's a pretty effective gag, but that's all it is. When the family cat Church gets creamed on the deadly road in front of their new place, neighbour Jud (Lithgow) shows Louis a secret burial ground where everything laid to rest comes back to life. The book references W.W. Jacobs's "The Monkey's Paw" often and impactfully throughout, and sure enough, when the dead return, they've changed; and sure enough again, one of the Creed children is inevitably going to be resurrected. But before that happens, it's important to know the kids. Ellie is a sketch played by an outmatched kid actor not given enough help. Watch her first reaction in the film, standing in front of her family's new home. Her eyes track everywhere. The direction was most likely, "It's your new house, look at everything, you're excited," and the result is a kid boggling in a way that feels unnatural and rehearsed. It's a community-theatre performance asked to anchor the emotional centre of this picture.

If you're familiar with the source material or the previous adaptation, you know the doomed kid is Gage. Kölsch/Widmyer make the very good decision to kill Ellie instead. Having an older child play an inhuman monster opens up all sorts of possibilities, including a fantastic image late in the film of Ellie dragging something big behind her. No accident that young Laurence's peculiar, broken performance suddenly makes sense post-resurrection. A scene where Louis gives his living-dead daughter a bath is frankly wonderful. For a few minutes after her return, Pet Sematary threatens to pull out of its cold, disconnected death spiral--but alas, without established relationships, there's no tragedy to Ellie's dehumanization and rampage. It's almost clinical.

There's a ghostly, zombie guardian angel character (Obssa Ahmed) à la An American Werewolf in London who says at one point, "I'm helping you because you tried to help me"--except that Louis didn't much try to help him. Jud says Ellie is the only thing that's touched his heart in some time, except we don't see that, and she is in fact an ill-behaved sketch of a little girl who would be very difficult to like. Then there's Jud, a mentor character who mentors no one, the friend who is not befriended--a character so underwritten that all of his lines are ported directly from a book from which the film decides to deviate sharply. There's a thing with masks early on that isn't paid off, making it a handy metaphor for how Pet Sematary is about looking the part more than it is about taking the time to earn its conclusion. The picture's not a total failure (partly thanks to Seimetz), but it's hollowed-out and insubstantial. The cat's good, though. Small wonder it earns the film its only vaguely emotional moment, abandoned somewhere by itself next to a gate that I think is a reference to The Mist. Or The Stand. Maybe not.