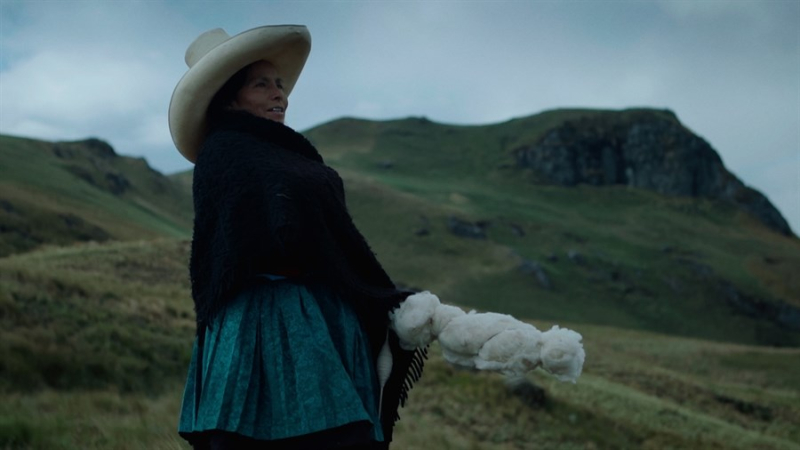 by Bill Chambers Shot with a little of that Jennifer Baichwal flair for Martian landscapes, Maxima is an almost tediously straightforward yet galvanizing précis of one Peruvian woman's struggle to keep the bulldozers away from her homestead. Having ransacked a huge patch of the Andes for its gold, the Yanacocha mining company wants to spread their tentacles as far as the Tragadero Grande, where Máxima Acuña has lived since purchasing the territory in 1994. In 1995, Yanacocha zoned for their proposed Conga Expansion Project in a deal that falsely included Tragadero Grande, and in 2011, Máxima was arrested for squatting on her own land following a violent confrontation with the police that left her battered and bruised and without a roof over her head, since the cops demolished her hut. Refusing to be cowed, Máxima accepted that the alternative to handing over her deed in the wake of this incident would be a years-long legal battle that still hasn't been settled by the end of the film, making all of her victories along the way frustratingly Pyrrhic. But they are victories, moral as much as personal: Máxima's stubbornness is protecting the surrounding lakes that nourish the lowlands, which Yanacocha would pollute with 96,000 tons of toxic waste per day. (That number, courtesy of fellow activist Milton Sánchez, sounds high to me--maybe something was lost in translation--but really, what would be an acceptable figure other than zero?) "It's almost like a slow death sentence," Máxima says. "There won't be any clean drinking water for the communities."

It's impossible to watch Maxima and not think of the protests at Standing Rock, or the water crisis in Flint, MI that's gone unsolved for years because no one can figure out how to profit from an altruistic response. Granting corporations personhood is among the most self-destructive mistakes we've ever made, because they didn't gain human qualities like feelings or scruples in the bargain. Coupled with their indefatigability, their lack of shame makes them bound to have the upper hand in any dispute with actual sentient beings. Every time technology makes an evolutionary leap there's an outcry from people who fear that indifferent machines will take over the planet, but I'm here to tell you they already have. ("Máxima represents the fight to have fundamental human rights prevail over the economic rights of large corporations[.] It's a fight for any citizen who could be in a similar situation against any other economic power," Máxima's lawyer, Dr. Mirtha Vásquez, bleakly summarizes.) It's also impossible to watch this film and not think of gold toilets, one of which was offered to the current president in lieu of his requested Van Gogh. While gold is a versatile precious metal, it lost its intrinsic value once it became emblematic of Trump's Liberace/Hussein decadence as far as I'm concerned; I think we have enough of it already. Maxima is a provocative springboard to talking about various injustices of capitalism, and it cements the martyrdom of Acuña--very likely the last thing Yanacocha or its U.S.-based parent company Newmont Goldcorp wants. In the end, however, Maxima might be said to not so much elevate her to a martyr as reduce her to one. (I learned more about her as a person from articles on the web.) Wanting for its subject's passion, it's filmmaking as dry as those desiccated mines. Programme: Persister