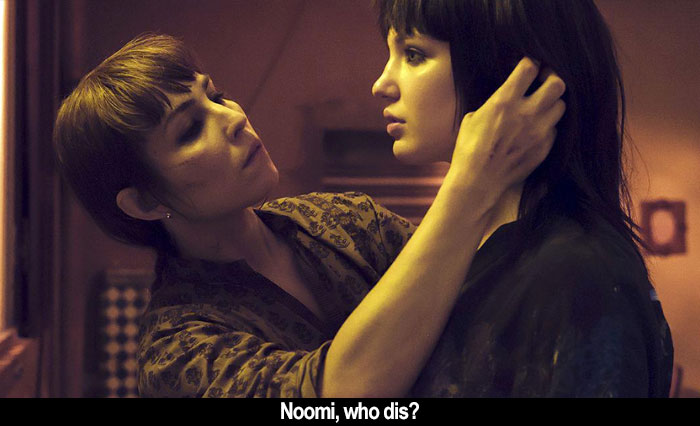 by Alice Stoehr "I've always been so fascinated by female bodyguards," Noomi Rapace recently told ENTERTAINMENT WEEKLY. "It's just a very intriguing, kind of hidden and secretive world." The erstwhile Girl with the Dragon Tattoo steps into that realm as a brooding close-protection officer in her new thriller Close. She stars as Sam Carlson, who's signed on to protect a spoiled heiress flying from England to Morocco. It's a short gig, in and out after one night at a compound high in the hills. But since it wouldn't be much of a movie otherwise, everything goes horribly wrong. Following a bloody siege and a mix-up with the authorities, Sam and her charge find themselves in a race for their lives. These circumstances force the pair to get a lot closer as they evade their attackers and investigate a deadly conspiracy.

Sophie Nélisse, a French-Canadian actress in her late teens, plays Zoe, who's just inherited a fortune in phosphate mining. She's initially entitled, snapping at Sam when she shoves away a guy at a nightclub: "Who do you think you are, my mom?" When danger descends, she pants and panics, Nélisse's whiny mien quite the opposite of Rapace's poised expertise. The two of them flee through Casablanca's crowded medina quarter, leaving behind them a dead policeman, and find lodging in a riad hotel with paint peeling off its walls. Sam plans to get them out of the ancient port city using falsified documents; in the meantime, cooped up together, they teach each other, with Zoe gleaning some street smarts and Sam loosening up emotionally. Director Vicky Jewson, who co-wrote the film with Rupert Whitaker, is clearly working from an age-old action movie template. Despite consultation with bodyguard Jacquie Davis and Rapace's professed interest in the field, little here smacks of lived experience. Zoe's mining concern, for example, has to weather both her father's death and her own fugitive status in the lead-up to a bidding war. Her morally grey stepmom (Indira Varma) pops up on occasion to grimace at expository headlines. It's an improbable knot of corporate intrigue relevant only as a MacGuffin.

The marrow of the movie is its close-quarters combat, whether that means Sam scuffling while cuffed on a hotel room floor or helping Zoe garrotte a would-be rapist with a chain. The action never strives for clarity, as Jewson and cinematographer Malte Rosenfeld favour low light on a palette of grays and browns. But the fighting's agreeably gritty, with weapons that range from bug spray and a pendant necklace to a dagger sheathed in Sam's boot. The most beautiful sequence in the film has her underwater in a shaft of dockside sunlight, a school of fish swimming to and fro as she swings a fishhook at a villain's back. Its submerged audio and halting choreography are stylish relative to the rest of the action. The adversaries throughout are interchangeable henchmen. They wear moustaches, wield guns, and speak unsubtitled French or Arabic. These antagonists are merely a part of the heroines' ordeal, much like Morocco itself. The nation of 35 million gives the film its picturesque backdrops, its deserts, its shores, and Close in turn reduces Morocco to a crucible where two lonely women can prove themselves.

"You shut people out," Zoe says of Sam in a lull before the climax. "I've never been able to trust anyone. I thought you were different." All of their dialogue is like this: blunt, subtext-free, grazing the relationship's surface. The characters only develop by explicitly stating how they feel. Though the film's premise might suggest a romance between the two, an early scene quashes that notion. ("You like what you see?" asks a lingerie-clad Zoe. "My sexual preferences aren't women," Sam hastily replies.) Instead, the story positions them as surrogate mother and child, because Sam has an estranged daughter, and Zoe's mom killed herself years earlier. The psychology's as simple as one puzzle piece slotting into another. It's dull writing, with zero insight into real women, because nothing the slightest bit real can fit into something so choked with cliché. Forget bodyguards, forget about love: Close is about little more than the crunch of a snapping rib, the glimmer of sunlight on water, and Noomi Rapace smoking a cigarette in another forgettable movie.