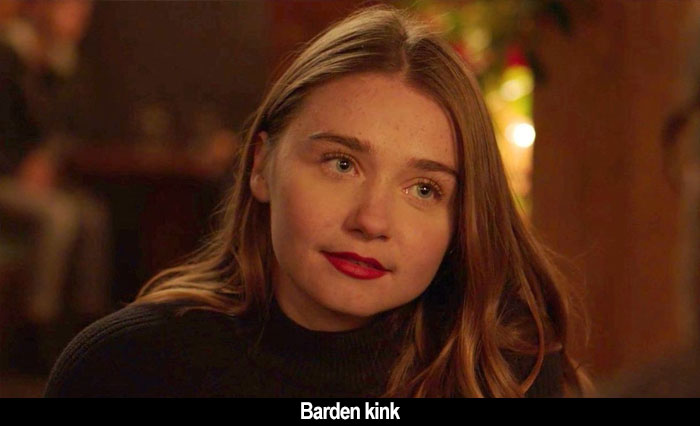 by Alice Stoehr Sex columnist Carrie Bradshaw wakes up in a hotel room after a fling with a Frenchman to find a thousand dollars on the nightstand. This is midway through "The Power of Female Sex," episode five of HBO's "Sex and the City". She summons her friends, sensualist Samantha and hard-headed Miranda, to ask them, "What exactly about me screams 'whore'?" Samantha counsels keeping the money; Miranda tosses around the word "hooker"; and Carrie weighs the gesture as either "an incredible compliment or an incredible insult." The episode has little to say about sex work and the attendant stigma beyond articulating some knee-jerk squeamishness. Twenty years have passed since then in the realms of feminism and pop culture. Twenty years, yet here's The New Romantic, a romcom with the same level of nuance on the subject of sex for money. Its heroine is Blake (Jessica Barden), a college senior who writes about her sparse sex life for the school paper. With the editor poised to take her column away, she tries to spice it up by interviewing a local "sugar baby"--a young woman who barters dates for luxury. It's not long before Blake herself is sipping wine opposite Ian (Timm Sharp), a well-off professor twice her age. Nor is it long before she, as a Nora Ephron devotee, starts to worry she might be sacrificing romance for the sake of journalistic material.

A petite English actress with a high, thin voice, Barden affects an ambiguously North American accent and an odd cadence that crumples her jokes. Only a handful of them end up especially funny; the best might be her answering "What's your major?" with "Useless," or saying of a dress draped on a shoulder, "it's not a toga" à la Schwarzenegger in Kindergarten Cop. Although she's in every scene, Blake's not much of a character, which hinders Barden's performance. Blake is self-centred, petulant, and little else. Her behaviour follows narrative contrivances, whether this means flirting with a male rival at the paper or scarfing down molly-laced cupcakes. The people around her act as appendages to her story. Sardonic roommate Nikki ("Riverdale"'s Hayley Law) gets substantial screentime to crack wise about Blake's dilemmas. (When Ian couriers her a scooter, Nikki dubs it a "ho-ped.") Sharp makes a fine villain with his prickly beard and dark sweaters, a sensitive demeanour obscuring Ian's menace. He buys Blake's company, then balks when she wants to get closer. Late in the film, he puts on a Donovan record and pressures her into sex. Tears in her eyes, she gazes just past the camera as he stays on top of her. This rape scene is upsetting and effectively staged, but also inconsistent with the rest of this lighthearted film. The remaining fifteen minutes never reference it, either, as Blake bounces back for a happy ending. Carly Stone, a first-time writer-director, introduces a startling degree of pain yet lacks the willingness to fully reckon with it.

Maybe this weak writing is Stone's way of showing mercy to Blake. It has her feel bad for a single scene then allows her a facile resolution. The New Romantic is undoubtedly a nice movie. Even its photography is nice, drawing out the shadows on Barden's body in the pale light of dawn. A couple of tracking shots are slightly graceful, though the wide frame often means a lot of wasted space, especially in the conversational medium shots that crowd the film. The crew shot on the campus of Laurentian University and in the surrounding city of Sudbury, Ontario, a few hours of north of Stone's native Toronto. Establishing shots render it as a picturesque town with sprawling pine forests beside it. The film itself leaves the setting generic. The story's about not about a particular place, but the sexual hazards facing women in college in 2018. Given which, it's surprisingly timid when it comes to the mechanics of sex itself. Outside of the sex scenes, which are brief and face-focused, an utterance of the phrase "hand job" is as graphic as it gets. Most discussion of sex stays in the abstract, especially in Blake's voiceover, which--like Carrie Bradshaw's--reads selections of her column's dubious prose. With writing this vague, how could a woman hope to process her experiences as a sugar baby? And how could a movie hope to say anything at all?