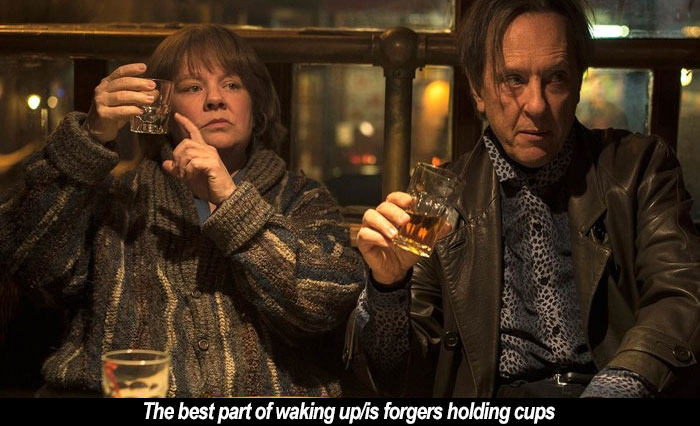 by Walter Chaw Can You Ever Forgive Me? is about Lee Israel (Melissa McCarthy), a gifted biographer who has achieved some small measure of success but lately finds herself unemployable, unloved, maybe unlovable. Her best friend calls her a "horrid cunt" and it's the nicest thing anyone says to her. Her agent, Marjorie (Jane Curtin), tells her that she needs to be nicer. Only successful people are allowed to display the full measure of Lee's misanthropy, she says; the full wrath of her lacerating wit and intimidating intelligence; the full portion of her knowledge and impatience with your lack of it. It's essentially the speech Crash gives Nuke in Bull Durham about fungus in his shower slippers. You get to be a slob when you're famous. When you're a slob and you're not, you're just pathetic and disgusting. I spent 36 hours in New York City once several years ago in circumstances very much like the one I'm in now: wondering what I want to do with the rest of my life, worrying that I'll never find it, worrying that I'll never get to do it if I do. It's frightening to think you won't achieve your goals. It's worse when you've achieved every single one of them and it means nothing to you, and so you're back at square one-ish. Luckily, though (well, maybe luckily), you do have this one skill...

Lee's one skill is that she's a good writer. She's good enough that she can do a pretty fair impersonation of other good writers. It's initially part of her problem, because, as Marjorie says, she disappears behind her subjects. She's researching a biography of Fanny Brice when she discovers some personal correspondence from Brice buried in her research materials. She steals it, then sells it to independent bookseller Anna (Dolly Wells) for a surprising sum. If only the content of the letter weren't so dry, Anna muses, she could pay more. So Lee embellishes another Brice letter--and then she begins to fabricate letters whole cloth, from the likes of Noël Coward and Dorothy Parker. There's tension in the forgeries and the tiny sums she's able to glean from them. This isn't a story about the big score, the Rififi. It's a story about how a hundred bucks at the right time might mean everything to someone, and how humiliating that is for an intelligent person who's tasted success and enjoyed some level of esteem. If a hundred bucks is the difference between eating or not for someone who is smart enough to know how much of a failure they've become, how they've so squandered their gifts, well, you can imagine how exquisite is the pain of that self-loathing. It's not about the heist, see; Can You Ever Forgive Me? is about the pain of needing to steal small amounts of money from people who love the things you love just to survive. It's about the pain of further alienating yourself from the things that give you life by becoming a parasite and fouling the bath as a bonus. What happened to you, anyway?

Lee meets homeless, dashing raconteur Jack Hock (Richard E. Grant) one night and they drink together because they're both alcoholics. They become friends after a fashion because Lee is a terrible person in exactly the way Jack likes and Jack is a terrible person who likes Lee. He moves in with her after getting beaten up. She confides in him about her moneymaking secret. When things are going well, when the rent is being paid and the apartment is a little less disgusting, Lee goes on a date with Anna. The moment Lee fucks everything up is played so beautifully by McCarthy that the breath sort of catches in the throat. Director Marielle Heller captures it in a medium shot as Anna picks up her menu and Lee looks down at the table for a second, then back up, then down again. Lee is smart enough to know she's a total fucking asshole, but she's not quite smart enough to know how not to be. At the end, after the jig is up (after all the jigs are up), you think there's going to be a second chance for Lee, but she doesn't really have apologies in her--and then she chooses the most irritating way possible to tell someone they're wrong, and the final joke of Can You Ever Forgive Me? is that the victim of her wit doesn't ultimately care in the slightest that she's right and he's wrong. There's no value to being right, no price attached to doing what's morally correct, no money for folks who dunk on malefactors and morons. There's only profit in this world from taking advantage of the faith that other people have in you. Or, at least, that's what Lee thinks. I hope she's wrong, but bad guys seem to be winning a lot these days.

Can You Ever Forgive Me? is about the kind of despair one hears in Charles Bukowski's poetry, and it evokes that despair in the burnt browns and umbers of its palette. It locates the brittle desperation in McCarthy's shtick and uses it as effectively as Charlie Kaufman and Michel Gondry did Jim Carrey's in Eternal Sunshine of the Spotless Mind. When Lee brushes dead flies off her pillow before lying down to sleep, it feels like a detail from one of William Burroughs's disgusting novels. The beauty of Can You Ever Forgive Me? is that it pays off this moment later with the revelation that Lee is more mentally ill than first appearances suggest. It's an emotionally resonant film centred on a person who lacks emotional intelligence, or is so depressed that engaging with others has become impossible. It's essentially a movie about how talent is seldom a salve to self-loathing. Talent is an unearned mutation that causes as much pain from failing its promise as succour for exploiting it. Lee says that she wants recognition for her writing. In a beautiful speech she gives at her sentencing, she says that these few months she was able to sell work were the best months of her life. She regrets nothing. Can You Ever Forgive Me? is about how gifts are never just gifts. It's about mental illness and loneliness. It's about artists and the Buddha's two deadly sins: the need for praise and the fear of criticism. It's really good.