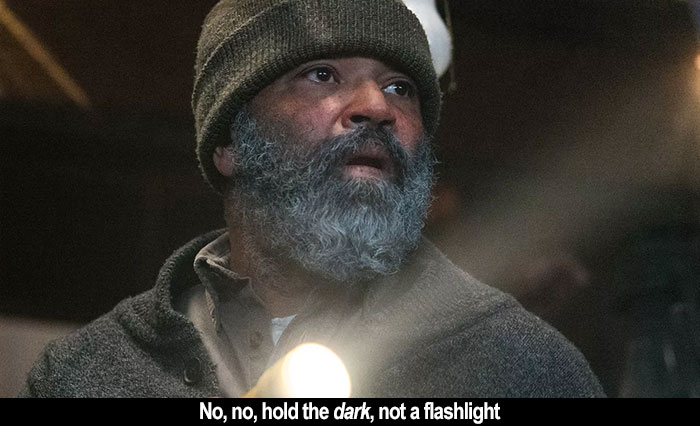 by Walter Chaw "There's something wrong with the sky," someone tells Russell (Jeffrey Wright). They wonder if he's noticed it. Jeremy Saulnier's Hold the Dark is about mythologies--how they explain the capricious chaos of the world in terms understandable, using images that are universal to us. Mother, father, child, dark, blood, fire. He tells all of this complex story of revenge, betrayal, and the hunt in these broad archetypal strokes; it's a film written on a cave wall, and at the heart of it what are a movie and a cinema but images animated by a flicker to be told in the company of others? Hold the Dark is beautiful and spare in the way that only things told in primal, innate gestures can be, and its setting, an arctic Alaskan wilderness (played by Alberta, Canada), reflects that austerity. When there is dialogue, it's doggedly insufficient to the task of description and explication. Russell is a wolf expert and talks about how he sees a pack eating one of their young--something called "savaging" that happens when the environment is wrong in some way. It seems counterintuitive to devour the young, but sometimes, Hold the Dark suggests (without saying it), it can be an act of love.

A little boy is dead as the film opens, carried off by wolves. The mother, Medora (Riley Keough), writes a letter to Russell asking him to help--to maybe kill one of them, the biggest one. She has to have something to show her husband, Vernon (Alexander Skarsgård), after his deployment in Afghanistan. Russell shows up at her door, not out of enthusiasm for the assignment but because he wants an excuse to be closer to his daughter, who teaches in a college in Anchorage. ("That's not Alaska," Medora says.) It's been a long time since he's spoken to his daughter. One day, sick and alone in his hotel room, he tries to reach her but gets her machine instead. He's sorry to bother her. He goes out in the cold to find the pack and Medora gives him a pair of Vernon's boots because the ones Russell's brought aren't going to withstand the elements. He still slides down the hill in them, dropping his rifle as he's scoping out "the biggest one" among the wolf pack. He recovers, but the wolf's stare is too humbling to pull the trigger. When he returns to Medora's that night, she's gone and Vernon is on his way home. Saulnier introduces Vernon as a duality of man: he exterminates a pickup of hostiles with his .50cal machine gun; he stabs, repeatedly, one of his fellow soldiers who is in the act of raping a villager, and hands the victim his knife so she can exact whatever further vengeance is her will. He betrays the same absolute lack of emotion there as he does when, back in Alaska, he notices that Russell is wearing his boots.

Hold the Dark is about looking for closure when there is no possibility for closure, about looking for revenge when there is nothing to avenge. It presents myth as a way that humans have always tried to bring sense to the senseless. Some of the reaction to the film, which presents no obvious answers, brings home how desperate we can be for an idea of order. Russell discovers he's being lied to. Not in an emotional sense--Medora does need something to present to her husband--but in a literal sense. In a literal sense, nothing is really what it seems to be. Vernon has a friend, Cheeon (Julian Black Antelope), who helps him with an abduction, a burial, a few murders, and then when they part, Vernon says he's sorry that Cheeon's own daughter was also taken by wolves and her body never found and Cheeon says that that has nothing to do with anything and Vernon knows that. He does know that. They don't speak again. They hardly talk at all to begin with. The sheriff, Donald (James Badge Dale), is stuck in the unenviable position of trying to understand why Medora has fled and, like The Searchers, whether Vernon is chasing her down to bring her home or to kill her. At the same time, they all remember a cave, with a hot spring, where Medora has said she might stay forever.

Adapted by Macon Blair--who's appeared in each of Saulnier's films including this one and should've been a star after Blue Ruin (but there's time)--from a book by William Giraldi, Hold the Dark is as spare and elegant as it is brutal and uncompromising. It sees gender as hardwiring and relationships as ritual. Late in the picture, Vernon is told that as a child his father tried to buy wolf oil to "fix" whatever it was that was wrong with him. He's "unnatural," it seems. The old man, a hunter and tracker called Hunter John (Peter McRobbie), asks Vernon if the treatment's worked. He also gives Vernon a wolf mask whittled out of a piece of wood. Vernon likes that. Or he likes it as much as he likes anything. Liking is beside the point, you know. The universe doesn't care what you like. Vernon attaches ritual to his son's death--he imposes order on it. His search for Medora is direct, brutal. To buy him time, Cheeon ambushes a group of policemen in a centrepiece that cements Saulnier's reputation for unadorned, sudden, entirely un-sexy violence. The violence is ritual, too, as much as the moments just before it where Vernon opens his arm to decorate his son's casket with his life's pain. Hold the Dark is about human constructs imposed on the abyss. It's a riff on Wallace Stevens's "The Idea of Order at Key West," the first stanza of which goes:

She sang beyond the genius of the sea.
The water never formed to mind or voice,
Like a body wholly body, fluttering
Its empty sleeves; and yet its mimic motion
Made constant cry, caused constantly a cry,
That was not ours although we understood,
Inhuman, of the veritable ocean.

'Holding the dark' is the perfect analogy for defining what's essentially indefinable. The film is suffused with cries that are indecipherable, but entirely familiar all the same; the only shape we can see are the imitations of shapes as they're acted upon by unpredictable forces. And we have stories. Stories about mothers and fathers, children who are lost and then found again, meaning ascribed to the meaningless to provide hope where there is none. Ritual is the foundation of our relationships with each other: roles we assign to one another and ourselves. Vernon is the artifactor of his reality. Medora is the artifactor of hers. When Russell finds her, she asks again if he's noticed that there's something wrong with the sky. The last line of the film is a question and answer. Someone wants to know what happened. Russell says, "Let me tell you."