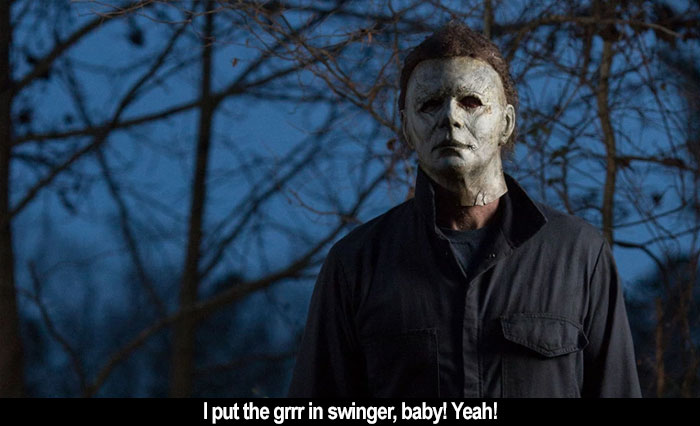 by Walter Chaw In the middle of David Gordon Green's Halloween--the night before Halloween, as it happens--a family is having a dinner to celebrate something and to meet the new boyfriend of their teen daughter when grandma shows up, drunk and possibly having a panic attack. It's already not going well, seeing as how mom is lying about having invited her mother to this little do--and when it starts going to hell, she uses the discomfort as justification for not having done it. "See? This is what I've had to put up with my whole life." The grandmother sits down and apologizes. She's spotted the man who once attacked her for the first time in forty years, and the shock has brought everything flooding back. She starts crying and no one is consoling her. It's an unbelievably topical moment in a smart, topical film, this suggestion that the effects of assault last a lifetime. That the horror of helplessness and victimization never entirely goes away.

Grandma is Laurie Strode (Jamie Lee Curtis), who, at the end of John Carpenter's seminal Halloween from 1978, declares with wonder that there is such a thing as the boogeyman. Her daughter Karen (Judy Greer) has spent most of her life in foster care, having been taken away from Laurie when she was twelve because Laurie is a self-described "basket case" who's tried to prepare Karen for the day Michael escapes again. Though some have likened Laurie in this film to Ripley, the better analogue is Linda Hamilton's Sarah Connor, just as the film itself is more Terminator 2 to the original's lo-fi (and also perfect) Terminator. Karen has a family of her own now, a funny husband (Toby Huss) and a smart, capable daughter named Allyson (Andi Matichak) who is navigating the straits of being better than her boyfriend (Dylan Arnold). Better than her boyfriend's friend, too. It's what happens when you're a young girl in a small town--Haddonfield, of course--and your choices are limited to the shallow end of the pool. Laurie was Allyson in the first film: she was the smart one with boy trouble. She seemed destined for college out of state, a life in the wider world. Although she survived the events of that Halloween, evidently most of the promise of her future died. The interplay between these three generations of Strode women form the backbone fascination of the piece. It's all paid off in a lovely sequence involving a staircase and a basement; Jung would have a field day.

For her part, Laurie has spent forty years in stasis, tricking out her farmhouse with hidden triggers, trap doors, and various MacGyver security features. Her hair's a mess, she doesn't wear makeup, she begins the film very much like the institutionalized Sarah Connor. Nothing matters, since the world is just waiting for a moment to erupt. Everything is temporary and cheap. And everyone thinks she's crazy. She tells Officer Hawkins (Will Patton) at one point that she's prayed every day for Michael to escape so she can kill him. He says that's a stupid thing to pray for. Men only seem to understand avenging a woman's loss of security and actualization when it's them doing the avenging. Or maybe he's saying it's a stupid thing to wish for because when the past is released into the present, the effects are inexorable and terrible. Taken as a two-part story and ignoring, as this film does, all of the sequels and reboots that came between, Halloween 1978 and Halloween 2018 form this painful story of how the course of a young woman's entire life, and the lives of all her loved ones, is decided by one night of violence visited upon her by what is essentially a metaphor for childish, solipsistic, pre-Oedipal masculinity. Karen screams at her mother to get over it. It's a weird message to send in front of her daughter. Later, when Allyson is assaulted in a drunken way by some guy at a party, it's interesting to see how she has or hasn't assimilated this message about the acceptance of abuse in our culture. Laurie can't get over it. Halloween is about that.

Halloween is also about providing endless pleasures for the Halloween nerd. It's The Force Awakens of this franchise. Green honours the first film's regard for its kid characters as Allyson's friend Vicky (Virginia Gardner, who's going to be a fucking star), babysitting little Julian (Jibrail Nantambu), invites her boyfriend Dave (Miles Robbins) over for a bit of pot and dry-humping, sure, but still prioritizes Julian's safety when the boogeyman comes. All of the young actors impress, while James Jude Courtney, who does the bulk of the Michael pantomime, is suitably brutal and oddly childlike. There are maybe a dozen iconic Michael moments in this iteration. Green understands that the best way to shoot this golem is from a low angle, or through glass. The film also makes the deliriously good decision to show four decades of internalization of trauma as having rendered Laurie into a suggestion--a shape--herself. She stands mute across a street, staring at her granddaughter in class, echoing a Michael Myers pose from the original. She appears where she shouldn't sometimes. When it seems like she should be down, she's suddenly fine. There are tremendous set-pieces, too, one in a gas-station restroom that plays on the essential revulsion and vulnerability of the location and ends with a loss of teeth, which in dream analysis means a loss of control. My favourite, though, involves a backseat with a sleeping monster, a magic word, and a madman at the wheel. A beautifully-mounted thing, Halloween has the emotional benefit of really loving its source material. It's nostalgic and, in a moment where Laurie expresses absolute disdain for the idea that we should try to understand monsters, it's contemporary, too. It is as much a film for 2018 as the original was for 1978, and Green has made his best movie since All the Real Girls.