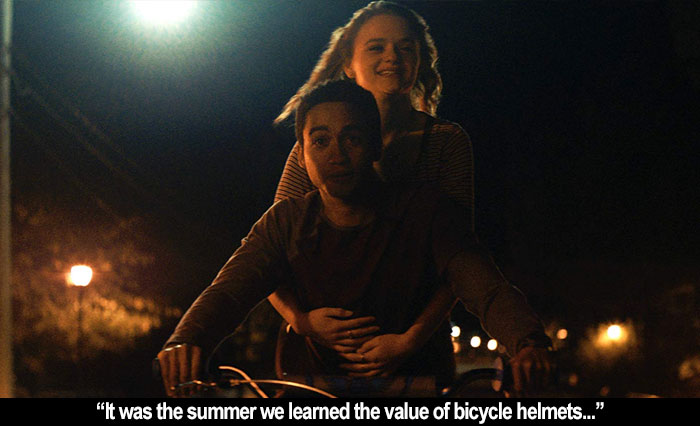 by Alice Stoehr Jamie (Joey King) sits beside her grandmother's deathbed as the old woman imparts some wisdom. "There's just one more thing," she says, "one thing in this world that you need to know. No one's gonna have the guts to tell you. I wish I had been prepared for it." Then, after all this build-up, the punchline: "Learn how to give a good blow job." So begins the coming-of-age story Summer '03, with an impish smile on grandma's face while Jamie gapes at her advice. June Squibb plays the the grandmother in a foul-mouthed mode familiar from her work as Bruce Dern's wife in Nebraska. Her character will flatline a few minutes of screen time later, but not before confessing at length to her progeny while "In the Hall of the Mountain King" swells on the soundtrack. She tells her daughter that she once locked her in a closet; implores her young grandson to enter gay conversion therapy; and reveals to Jamie's dad the existence of his secret biological father. Most of the film takes place over the following week, with the family in chaos (and blow jobs on Jamie's brain) as they plan the funeral.

Grandma's staunch Catholicism nudges the half-Jewish Jamie towards church, and there she meets Luke (Jack Kilmer, son of Val), a seminary student just a week from ordination. They flirt, go swimming, get drunk on bourbon. She goes down on him in a playground. In the voiceover narration that pervades the film, she declares oral "a gateway drug for sex" and plots to further their relationship. Meanwhile, the screenplay allots each family member their own pat subplot. The cousin crashes his mom's car after he types "Where to fix being a homosexual?" into Ask Jeeves. (Per the title, it's 2003.) The dad, played by comedy veteran Paul Scheer, brings his own dad back from Germany--only to discover that he's a vocal anti-Semite. Andrea Savage as Jamie's mom is the film's standout, her maternal affection still audible even in the shrill sarcasm that makes up the bulk of her dialogue; even as she reckons with a boy-crazy teen and an impulsive husband. Predictably, everyone's crises come to a head at the funeral service, after which five minutes of falling action resolves all conflict.

First-time writer-director Becca Gleason has described Summer '03's story as "partially autobiographical and partially fabricated." Certain details do feel true to life, like Jamie's candy bar-style Nokia phone or her Harry Potter-themed sex fantasy. The depiction of human behaviour, on the other hand, feels like bad writing. When Jamie and her parents interact, it's through sputtered, overlapping repartee, the jokes too obvious to be funny. The treatment of the cousin's internalized homophobia is as shallow as that of the grandfather's anti-Semitism: in each case, a few lines of dialogue at the end of the movie mean it's no longer an issue. Worst of all, though, is the centrepiece romance between Jamie and Luke. They have some chastely-photographed sex in the shadows of a public park when a police spotlight intrudes. Jamie's grounded, and Luke breaks off their fling. She initially hates him for it, but ends the film deciding to "let it go." She never seems to process the sex she had or the man with whom she had it.

So who is Luke? Ordination typically requires about eight years of training, but Kilmer is in his early twenties and still looks like a high-schooler. He's sorely miscast. His voice is flat and restrained, whether describing his path to the priesthood--"I worked really hard, put myself through school, and here I am"--or coitally grunting. Kilmer's performance leaves Luke an emotional blank. Is he self-destructive? A predator? Probably both, but the film gives no indication either way. Instead, it relies on Jamie's explicit reactions: first horny, then heartbroken. King's work here has little in the way of subtext. She creases her brow and delivers lines with a jokey inflection to convey teenage self-involvement. (Her hysteria in last year's Wish Upon was a lot more fun to watch.) This nuance-free acting in the service of flimsy characters makes it tough to pin down Summer '03's tone. Nathan Matthew David's score, which favours vaguely rousing piano and strings, adds to the incoherence. Is this a black comedy à la Todd Solondz? Or a quirky teen drama with a dash of girl power? All in all, it's too glib, too zany, too half-hearted to be a solid example of either.