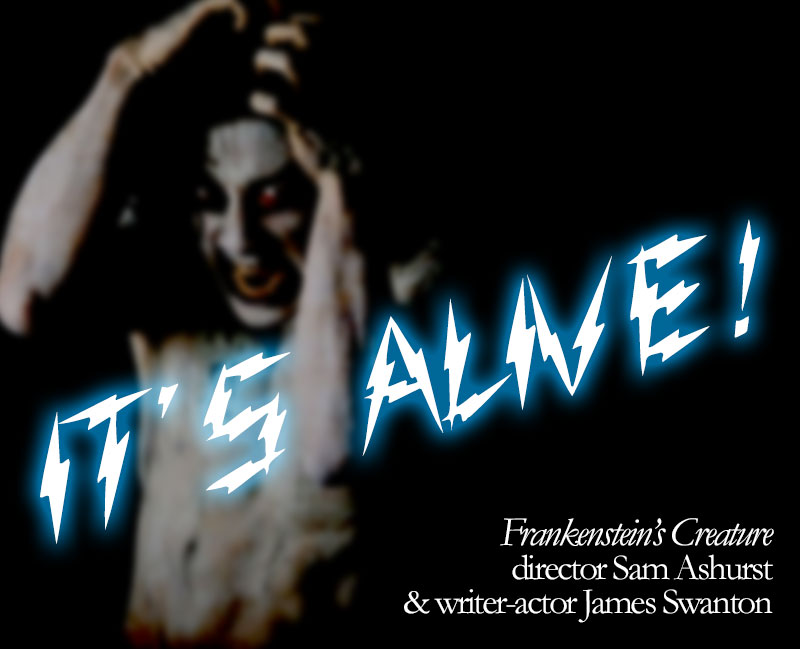 by Walter Chaw Sam Ashurst's film of James Swanton's play "Frankenstein's Creature" is the best film of its kind since Spalding Gray and Jonathan Demme's Swimming to Cambodia. It solves the problem of shooting a static, one-set, one-man show with graceful, inventive technique. It's smart about what it does and an act of extraordinary brinkmanship that happens to pay off in spades. Both based in the UK, Messrs. Ashurst and Swanton were kind enough to chat with us from amidst the whirl and fury of London's FrightFest, where Frankenstein's Creature had its debut this past August. We started by talking about Mary Shelley's novel on the 200th anniversary of its publication:

SAM ASHURST: Frankenstein's a timeless story. Its themes are even more relevant today. It's essentially a story about two narcissists--Victor Frankenstein and the Creature--and the harm they do to people around them. And we've certainly got huge problems with narcissists in society at the moment. It's also about science going out of control, which is also a very modern concern--it feels like it could be a metaphor for climate change.

It's also about the most timeless theme of all: death, and our desire to control it. That, and the fact it's so beautifully written, will keep it relevant for another 200 years and beyond. I actually read the book after I saw James Whale's film and was surprised by how different it was. One of the things we set out to do was make the most faithful cinematic adaptation of the novel, even if we're doing it in an unusual way.

I also love Bernie Wrightson's adaptation, and I wanted our film to have some of the visual density of that art. It's the intense detail that makes it so special, so there are moments in our film where I wanted the screen to feel as detailed as possible, and that's where the dissolves come in. And the location, too--even though you're looking at the same space for 90 minutes, there's enough texture in that space that there's always something to examine.

FILM FREAK CENTRAL: I was reminded a lot of Swimming to Cambodia as I was watching.
I love Jonathan Demme. For me, the film's influences are all cinematic--even the proscenium style in which we shot, and because we shot it on the 200th anniversary [of Frankenstein's publication], I thought it would be interesting to make it look like a feature film that had suddenly been discovered--to make my first film feel like the very first films. So we used the fixed camera of the Lumière brothers and the magic tricks of Georges Méliès. Around a third of the earliest films were either inspired by theatre, or tried to recreate the theatrical setting, so it seemed to make sense on a cinematic level.

German Expressionism seems to have heavily influenced the look of the Creature. Obviously Caligari, but also another Conrad Veidt, The Man Who Laughs. Can you talk about a particular ethos you borrowed from the expressionists?
Films like The Testament of Dr. Mabuse were a major touchstone--I actually had images from that film on set to help [Johnny Rhodes] the DOP get his head around what we were doing. And, for me, it's not just the genre connections with Mary Shelley's book that made German Expressionism right for our film--there's the exploration of existentialism and feelings of despair, with influences from different art movements that are inherent in those films that felt really right for this. But we also had modern influences in there too. There's visual echoes of stuff like The Exorcist and Ringu, and I added elements to make it feel like more modern horror.

This isn't going to be the style I use for everything I do, my aim is to use the cinematic influences that feel right for every project I end up doing, so my filmography will hopefully feel very diverse.

What was the seed between you and James [Swanton] that this project germinated from?
I made a music video for an arts TV show in the UK called "Random Acts". They gave me a budget, which was small enough I thought I could probably raise it independently. I looked around me and realized I had all the crew I needed to make a film, if only I could shoot a film in a day. So I started to think about how I could do that. A special effects friend, Dan Martin, who's worked on films like A Field In England and Human Centipede II, said he'd been given advice that if you want to shoot a film in a day, you should option a play--as it's a complete narrative with actors who know how to do it.

I'd worked with James Swanton on a teaser trailer for a script I'd written called The Devil's Patient, and I knew he had a one-man Frankenstein, so I asked him to send it to me. It was one of the best things I'd ever read, so I asked him if I could adapt it into a film. Thankfully he trusted me with it! I showed James [Andrzej Żuławski's] Possession, There Will Be Blood, and a lesser-known Robert Altman film, Secret Honor, which all have theatrical performances at their heart, but still feel very cinematic.

Did you succeed in filming it in a day?
We did a week of rehearsal where we re-blocked for the smaller space, and to line up with some of the visual tricks I wanted to do. It still has the rhythm of the original play, but adjusted for the location and the ideas I had. During that time we ran it two or three times a day, taking a day's break before filming. I'd scheduled time for three takes on the day of the shoot, but knew we'd have it on the first one, so we moved on to B-roll. 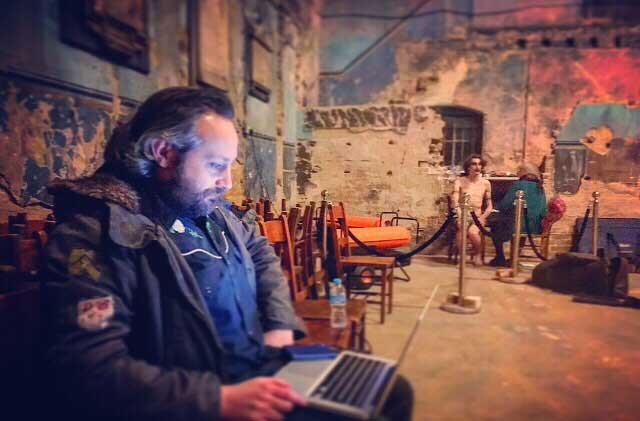 "I'm not a religious person, but I worship at the church of Tarkovsky."

James, your interpretation of the Creature more obviously positions it as an analogue for humanity--can you talk about that?
JAMES SWANTON: The Creature's journey in the film can be viewed as a twisted 'coming of age' story. Through strivings and stumblings, the Creature outgrows his enmeshment with his creator-father Victor Frankenstein--the "Modern Prometheus" of Shelley's novel--and eventually goes one better than Prometheus in his relationship with heavenly fire. Despite the unforgivable nature of the Creature's life and crimes, I wanted his journey to register as strangely inspiring--inspiring, at least, within the confines of the Creature's own mind, his perspective being inescapable in this one-man confessional.

Can you talk a little about the post-production process--the editing, the double-exposures, the music?
SA: There were a lot of magic moments along the way--almost like this film wanted to exist and we were just helping it. I worked with a brilliant editor, David Marshall, who's won awards for his work with Comedy Central, and I was originally going to hand it over to him to edit alone. I even asked him to come to the shoot so he could see what we were doing and get his head around it. But he quickly realized I had such a clear and unique vision for the film, it made sense for me to sit in [on] the edit and for us to work together. It was very collaborative and really enjoyable.

For the music, I wanted it to feel like it was coming from inside the Creature. Johnny Jewel's astonishing music existed already, he let us use it--it had the feel of Vangelis' Blade Runner score--another incredible Frankenstein story. I love all that '80s film-score electro, Tangerine Dream, Giorgio Moroder, and John Carpenter.

In terms of the slow zooms, those are for the audience--in anticipation of when they'd want to lean in for a closer look, or move away from the events unfolding. The natural dissolves and the other elements we include are to represent the fractured psyche of the Creature--who I think would have a perfect recall of events and environments. I wanted a bit of visual poetry in there too--in the style of Tarkovsky, and Andrei Rublev in particular, which I gave to my second unit director Jónatli Gudjonsson as a reference, along with the list of specific shots he needed to get for our narrative. He brought back so much beautiful footage from Iceland, we had to use willpower to be restrained and not just use it all!

Oh man, Rublev.
SA: I'm not a religious person, but I worship at the church of Tarkovsky. His films give me a spiritual feeling unlike anything else. What moves me the most is the very unique and very specific atmosphere his films create, partly through poetic imagery/camerawork that's there for mood as much as anything else--he just creates such a powerful feeling. It's actually impossible to describe the feeling his films give me, especially Andrei Rublev, but it's transcendent.

Obviously I'm on my first film, so it's a pretty ambitious influence, but I hope Frankenstein's Creature creates a mood and an atmosphere that feels unique, that will stay with the people who connect with it. I carry Rublev with me constantly, so it would be nice to give someone else that feeling.

What are your hopes and fears for this, your own creation, upon its first steps into the world?
SA: I want people to focus on it, if that makes sense. I made the film for the cinema, and for a group experience. My fears are more linked to people not giving the film their full attention. Especially in these early stages of the film's life, where there's no real reference points for people coming to it completely fresh. And it is intended to be a trance film, so it can feel a bit weird for half-an-hour or so, before it pulls you into its world and feels like a bit of a trip.

It's a challenging film, but a rewarding one, hopefully.