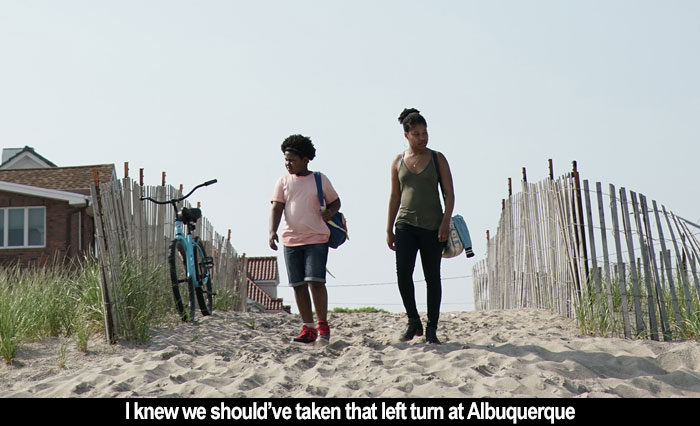 by Alice Stoehr Social workers reel off exposition: this cagey black girl in their midst is Angel (Dominique Fishback), nearly 18. She has a 10-year-old sister, Abigail, but hasn't seen her in a couple years. Since their mother's death (at their father's hands), Angel's been in foster homes and juvenile detention. Now she's on parole and plans to stay with her girlfriend. These government employees briskly summarize her life while the camera holds her in close-up. It's efficient filmmaking that establishes both the heroine's circumstances and the system that's confined her. Moments later, she's out on the street, looking for someplace to charge her phone. So begins Night Comes On, the debut feature from white actress-turned-director Jordana Spiro, who also co-wrote the screenplay with Angelica Nwandu. Its 80 minutes will chart Angel's next 48 hours as she pursues an objective of which her caseworkers are unaware: to acquire both a handgun and her father's new address. The film extends outwards from this premise in a straight line. First she meets with the father of her former cellmate, a scumbag dealing in black market firearms. (Max Casella plays him the same way Harvey Keitel might've a few decades earlier.) A phone call interrupts their negotiations, which have involved him groping her; to buy time, he has his wife stop at the store for milk. On Angel's way out, he hands her a half-gallon jug from the fridge. "Do me a favour," he says. "Throw this out." A beat later she's outside tossing the jug against a wall with casual disdain.

That example's representative of the storytelling in Night Comes On. It's a character study about Angel's survival strategies, her means of existing in the world. It's also snappily edited by Taylor Levy, whose prior experience includes assisting Jennifer Lame on Hereditary and Manchester by the Sea. In the film's first half, Angel drifts from one encounter to another. Her sister Abby claims to know where their dad lives, and the two of them arrange to take a bus there in the morning. Her girlfriend Maya vents about their relationship. "I can't get close to you," she sighs. "I mean, you don't even tell me everything," in response to which Angel levels her narrowed eyes, then walks away. She spends the night wandering Philadelphia, where the film was shot. Visible signage marks her path over the Schuylkill River via Girard Avenue, then north to the Strawberry Mansion Bridge. She catches a few hours' shut-eye on a lobby's tiled floor. The latter half of the film is about her ride with Abby out towards New Jersey's Long Beach Island. The sisters talk, voicing affections and resentments. Abby gets her period in a gas station bathroom, so Angel swipes her some pads. They befriend a multiracial trio of girls from way out in the suburbs and tag along with them to an overwhelmingly pristine home.

These scenes rely on the collaboration between Fishback and Tatum Marilyn Hall, who plays Abby. The former's more restrained, a neutral expression on her face as she moves through public spaces, while the latter's more demonstrative to a degree that embarrasses her big sister--more obvious about her emotional need. Fishback has the bossy demeanour of an eldest child, inclined towards caretaking but inhibited by her pain. "You think I'm this okay person," Angel tells Abby, "but I'm not." ("I think you're the greatest" is Abby's retort.) Family trauma underlies their relationship, sometimes bubbling up into shouting matches. They get to share one lyrical interlude, at sunset by the beach. Cinematographer Hatuey Viveros Lavielle emphasizes the hazy colours and diminishing light. Then Angel leaves her sister on a bus back to Philly and hunts down her dad. The last ten minutes are just her with a decision to make, talking to the man she hates in the house they used to share. The prospect of her revenge is the engine that propels Night Comes On, but especially at the climax it's clear that the film's priorities lie beyond the morality of violence. It's more about places remembered or visited, the meals and transportation on what little money she can scrape together. This is a short, tight story about everything two sisters can give each other and the father they want nothing from.