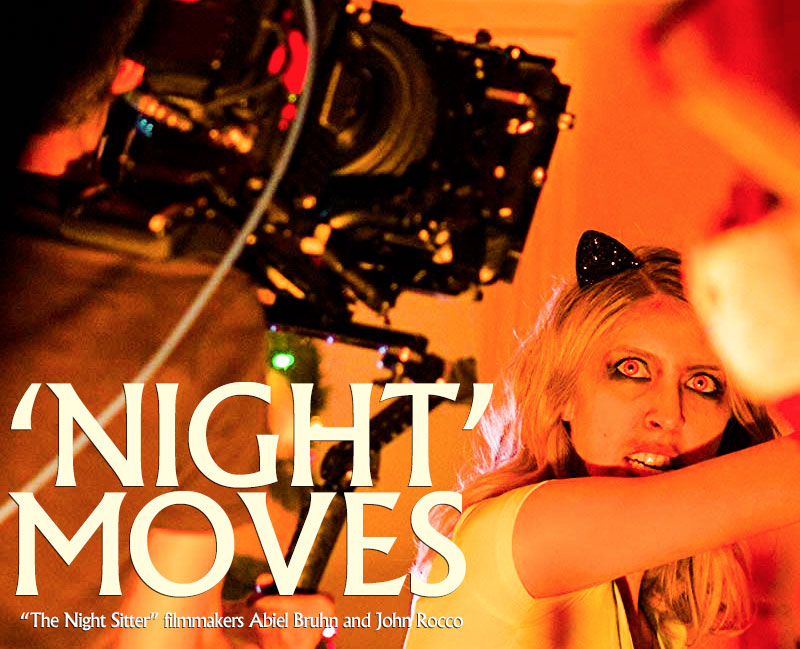 by Walter Chaw The Night Sitter is awesome indeed. Partially crowdfunded via Kickstarter, it represents the feature debut of writing-directing duo Abiel Bruhn and John Rocco and their filmmaking collective Roller Disco Massacre. Just a couple of guys who love '80s horror and know how to use it in a sentence, Bruhn and Rocco were kind enough in the heat of this year's FrightFest to answer a few pressing questions. We started off talking about practical details of shooting The Night Sitter:

ABIEL BRUHN: Principal photography was three weeks, shooting six days a week and taking Sundays off. We shot at John's parent's house in Nashville, Tennessee. It's a really fantastic property, we were able to live and shoot there and obviously it was an amazing experience for John to shoot a horror movie in the same dark attics and creepy basements he feared as a child. But with pre-production and wrapping out included, we spent like 40+ days at that house, mostly working nights! It was definitely intense. We shot everything on a pair of RED Epics provided by Scotty and our co-producer Kelly Pratt.

FILM FREAK CENTRAL: Can you tell me about your use of lighting and colours in your picture--including costume design.
AB: We've worked with our cinematographer Scotty G. Field for the last decade, he's a key part of the Roller Disco Massacre team and we've really honed in on this colourful, hypervisual style together. The great thing about a lot of the horror films from the '70s and '80s we're emulating is that the colour of the lighting isn't always fully motivated. Christmas decorations motivate a lot in The Night Sitter, but we go a bit more surreal and impressionistic towards the end when things get crazier. And people who want to get really deep into it can pick up on colour motifs throughout the film: red is usually a warning of some kind, green represents the witches, and the costumes of our "Final Three" are all colour-coordinated.

You have some amazing kills--I'm thinking the scalping in particular. Talk to me about the importance for you of practical effects vs. CGI.
JOHN ROCCO: The scalping is definitely one of our favourite effects as well! We generally do 90% of gore effects work practically on set, with a few touch-ups/removals afterwards if needed. While it's time-consuming, we're huge advocates of practical effects. There's an amazing energy on set whenever you're doing a complicated or gross--or both--gag, it builds morale and gets people excited about making movies. And of course, it helps the actors out a ton to have something tangible to look at and react to. We were lucky to have Ben Rittenhouse on board as our special effects artist. He's worked on huge stuff like Kill Bill and Blade 2, and he had recently set up shop in Nashville when we came into town to shoot. Since he has his own school out there, on heavy effects days he could bring in his students to help out. And these students were all incredibly talented and hard-working, we wouldn't have made our days without them. Our absolute favourite effect happens towards the end, it's even juicier than the scalping, but we don't want to spoil anything [for your readers].

Tell me about the process of working with a co-director. This is your second feature-length project?
AB: This is actually our first feature-length project after a series of short films, all made with our Roller Disco Massacre team.
JR: While on set there is so much to tackle in such a short amount of time, that we are able to divide and conquer tasks without stepping on each other's toes. It really does help to have different opinions at times when making decisions that you will be living with for the rest of the film. It is very much a collaborative art form at every stage--from the beginning when developing the story all the way to the end when we're making adjustments to sound, picture, and colour correction.
AB: On set we don't really have rigidly defined roles--one goes to camera, one talks to actors, that kind of thing. It's more about just being on the same page after pre-production while still remaining open to change. The actors always have suggestions during blocking, Scotty might want to shoot something a different way, et cetera. Collaboration fuels a great set and a directing team creates that dynamic right away.

What was your writing process?
AB: Writing with a location in mind is a huge help, since we knew the actual layout of all the rooms in the house and what each one looked like we could create a shooting draft that had pretty airtight blocking. There weren't any drastic changes to the story after the shooting draft was written, but the cast was always given the freedom to alter the blocking or dialogue to make the moment feel more natural. The bigger changes were actually in post-production: Sometimes stuff just doesn't work in the edit like it does on the page, so we trimmed and rearranged a few scenes for pacing reasons.

What were your obvious influences and your not-so-obvious ones?
AB: Most people can already pick up on the Italian horror influences of legends such as Dario Argento, Mario Bava, and Lucio Fulci, but there were several other references we incorporated as well. Of course, a lot of the Christmas horror classics like Black Christmas, the remake Black X-Mas, and Silent Night, Deadly Night were a handful of movies that we used to make our colour palette a little more vibrant. Films from masters like Stuart Gordon and Brian Yuzna were also crucial in our creation of The Night Sitter. Most of their films involve supernatural or Lovecraftian elements and bring a certain amount of comedic energy to the genre, and we wanted to make sure The Night Sitter had traces of those elements. Pretty much any horror movie that you can put on mute, play your own music, and still be engrossed by the visuals/story without any subtitles was a reference for The Night Sitter.

Your cast is top-down fantastic.
JR: Our producer Cristian Quintero spearheaded casting. We looked in LA, New York, Atlanta, Nashville, and a couple other states in the south. We saw a lot of people, but all of them were given two sides for the audition--one with a comedic scene and one with a horror scene. So everyone who's in the movie passed that test with flying colours. I think they really endear the audience to these characters. The tone is always tricky with horror comedies, but The Night Sitter strikes a nice balance because it's a bit of a hang-out movie until it gets interrupted by a full-on horror movie. So the relationships between all the characters can be funny, but we're never laughing at the violence or the scares.

Elyse Dufour is exceptional and her character, Amber, is surprisingly complicated.
AB: The horror genre has a long legacy of great female protagonists, to the point that "Final Girl" is shorthand that everyone understands even if they don't love horror movies. Amber does have an arc that is sort of similar to that, but Elyse brought this incredible aura of mystery to the character that really sets her apart. You keep learning new things about her and seeing new sides of her as the movie progresses. She has her own motivations, so she's not just sitting around and reacting to the plot. Amber also grounds the audience because Elyse can shift so easily between tones--we can move from funny to scary to touching to scary and it still feels like we're watching honest character beats.

Vincent, the next door neighbour, is complicated, too.
JR: Ben Barlow did great work as Vincent, and the fact that he shared so many of his scenes with Elyse was key--they had great chemistry and really played off each other well. Lots of supernatural horror movies have an expert character who has greater knowledge of the threat, so Vincent sort of subverts what people will be expecting--he's just the guy next door who listens to loud music and always smells like weed. But an obsession is an obsession, so he's helpful--uh, to a degree. The great thing about Vincent is that his creepiness at the beginning just comes from a lack of confidence. As soon as Amber shows any interest and they're hanging out at his place, he sort of relaxes and you realize he's a really likable guy. So the transition feels pretty natural, which speaks to Ben's skill as a performer.

What's the intersection of comedy and horror? What elements do they share? What's the utility of putting them against one another?
JR: The beauty with juxtaposing comedy within a scary scene is that you allow the audience to take a breath for a moment during the chaos. It's a way to gently reset the stakes and tone so you can build up to another big scare, and it's pretty effective as long as you use character-driven humour rather than some sort of slapstick or situational gag. Our overall goal with The Night Sitter is to shock and entertain our audience, so comedic and horrific elements go hand in hand. We'd like to think of this movie as a roller-coaster ride filled with lots of unexpected twists and turns, but the bottom line is that the audience should be having fun.

Talk to me about what you believe the role of horror to be in our society. What's its function and why do you think it's enjoying its good health of late?
JR: For the most part the horror genre is used as a place to escape from reality for a majority of society. People don't like to associate scary situations and death with their own personal lives. Instead, they want to fantasize and live it out through a different character. That's why most horror movies are made. Sometimes it's fun to see how horribly wrong a situation goes for someone else. Horror movies are the perfect escape from reality. They allow you to look back at your life with a sense of calm and ease, thinking, "Well at least my life didn't turn out like that!"
AB: It's an emotional release, in a lot of ways. We all have fears and anxieties, but confronting them is so difficult. A great horror movie lets you feel those emotions--really feel them in the pit of your stomach--and then your brain's had enough of them for a little while and you can carry on. And in general, lately I think people have been picking up on the fact that you can use horror to talk about big ideas without being pretentious. The audience is so open and vulnerable when they watch horror movies that you can sort of sneak in serious themes and they'll really engage with them.