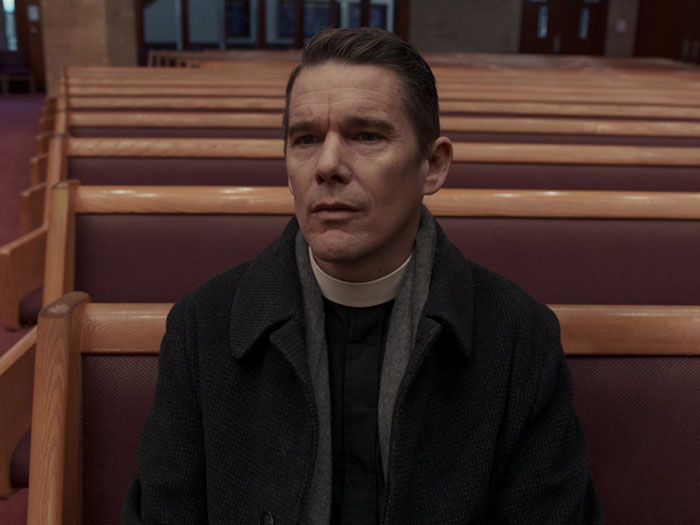 by Walter Chaw The title character of Robert Bresson's Diary of a Country Priest is consumed by his inconsequence. Determined to make a difference, he can't even make an impression on the vile inhabitants of the little town that is his parish. It consumes him. It kills him. No one notices. There's nothing to notice. Bresson doesn't even bother to show it. The priest's voiceovers become more urgent, though his faith never flags. He develops terrible stomach pains he seeks to soothe with an austere diet of bread soaked in wine: the Host, I guess, that nourishes communion with the holy spirit, but also the cancer in his gut that consumes him. His last words? "All is grace." Paul Schrader, raised in the Dutch Calvinist Christian Reformed Church, which basically believes that Christians don't earn their salvation but rather receive it as a gift they don't deserve, has made it his life's work to react against his faith--and to live it, too, when reaction fails. Towards the end of his new film, First Reformed, the priest, Toller (Ethan Hawke), writes on his church's whiteboard "Will God Forgive Us?," which is less Calvinist--God already has forgiven us--than a sign of a faith in severe crisis. Schrader's riffed on Bresson's film before with his script for Taxi Driver, still his best-known work despite a career littered with masterpieces of individual fears, men in isolation from God, and spiritual self-loathing. In Taxi Driver, the Priest is a sociopath driving through a Times Square hellscape, praying for the apocalypse to come as a purifying, obliterating rain. He tries to kill himself, but becomes a hero instead. First Reformed is either less cynical or more cynical than that. It's complicated.

Toller is starting a diary. He'll write in it for 365 days, then reduce it to cinder and ash. A young woman--Mary (Amanda Seyfried), of course--asks Toller to counsel her husband, Michael (Philip Ettinger). She's worried about him. Michael, it seems, is an environmental activist lately given to despair. The point of no return was 2015, he says. It's 2017. Greed has caused the end of the human race; the rest of it now is just marking time until everyone is gone. His words are frightening and Toller is frightened. He has an extended conversation with Michael where he talks about fighting despair when he lost his own son and subsequently his marriage, and he urges Michael to consider giving himself over to faith. It's a testament to the power of Hawke's performance that as he sits there, confident, handsome, well-spoken, it's clear that Toller himself no longer has faith in a higher power. In a contentious lunch with the owner of his church (Cedric "The Entertainer" Kyles) and despicable industrialist Balq (Michael Gaston)--who, it turns out, owns them both--Toller raises the issue of climate change and our role in it and asks if God will forgive us for destroying His creation. Balq impugns Toller's past and suggests he manage his own house before managing another's. And that's the crux of First Reformed: the issue of responsibility, ownership, accountability in all things--whether we are servants to others or to the world or only to ourselves. Like Bresson's Priest, Toller is attractive, so we naturally assume that he and Mary will have an affair, but they don't, not really--or maybe they do. That's complicated, too.

Michael kills himself and leaves behind secrets, including a suicide vest packed with explosives. Toller says he'll destroy it for Mary, but keeps it in his spartan room in his little ramshackle "tourist's" church. First Reformed tells the days and weeks leading up to a "big" reconsecration of the site, led by his pastor and meant to involve Balq, the mayor, and other luminaries. Esther (Victoria Hill) is invited, too. She's a woman who works at another church and with whom, it seems, Toller once had a dalliance. She pursues him. She suffocates him with concern for his obviously-declining health. In a difficult confrontation in a stairwell, Toller tells her that she brings out the worst in him and that he despises her. He uses that word. It's as sharp and cruel as a physical blow. She arrives at the reconsecration and sings "Leaning on the Everlasting Arms" as Toller decides whether or not to blow everyone up. Schrader wrote a landmark book of film criticism called Transcendental Style in Films, a tripartite study of Ozu, Bresson, and Dreyer. It's based on a premise predicated on an epigram by Gerardus van der Leeuw: "Religion and art are parallel lines which intersect only at infinity, and meet in God." Schrader's "Transcendental Style" must begin in the quotidian, merge with the holy, and thus approach the infinite. (Romanticists called it "the sublime.") Mary, in a panic, comes to Toller in the middle of the night and asks if he'll let her lie on top of him, in dual cruciforms, so that they can breathe into each other. It's not sexual. As they lock eyes on the wood floor of a mostly empty room where the priest lives, suddenly the film changes and Paul Schrader has made his masterpiece. I stood up in the theatre then. I could feel it. Amen and hallelujah.

First Reformed is the career statement of one of the key voices of the best period in the history of the cinema. It's about how an individual elevates himself through suffering, grief, self-abnegation, and no little loathing to find grace in the spiritual miracles of the visible world, transcendence in the mundane. It's a more eloquent exploration of his Transcendental Style in Films--less academic, sure, but also less careful to finish one plank before building the next one. There's a chance throughout that Schrader will lose control of the piece and fall into whatever's underneath: self-parody, slapstick, absurdity. But he treats First Reformed like a holy madness. Toller drinks, vomits, mortifies the flesh in any number of subtle strategies before finally mortifying it in the traditional ways. He is an existentialist hero, powerless against everything, betrayed by everyone, ultimately discovering some measure of salvation in fervour. He is a hero not so much of Kafka but of Herzog, an Aguirre with his nation of monkeys adrift on a deadly quest for meaning and immortality. Schrader shoots everything with a quiet, architectural authority and Hawke stalks these barren spaces with a manic but contained energy. He's a fascinating actor to watch, made more so by our familiarity with the intensity of his easy charm--the John Cusack you can bring home to meet the parents. He's never been more suited for a role and he's never been better. First Reformed is a Bresson film in its ability to distil great depths of meaning from gestures; an Ozu in its obsession with the life cycle of places; a Dreyer in the simple, nay, elegant fervour of its religiosity. It's a quintessential work for this time and place and, with a nod to Schrader's intentions and sources, it's a masterpiece that transcends this time and place as well. Originally published: September 19, 2017. 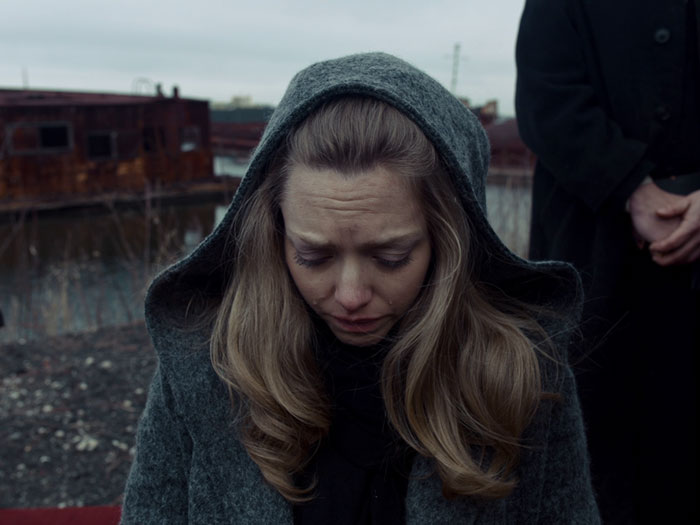 THE BLU-RAY DISC
by Bill Chambers Lionsgate brings First Reformed to Blu-ray in a sterling A/V presentation. The company is again stingy with disc space--the 113-minute feature occupies a mere 18.4GB of a BD-25--but with an Academy aspect ratio and a visual approach that tends towards static shots without a lot of movement in them, the film weathers the compression beautifully. First Reformed's crisp, clean aesthetics, which owe as much to the minimalist interiors and priestly vestments as they do to Alexander Dynan's digital cinematography, translate well to the small screen, and the 1.33:1, 1080p image looks more than adequately cinematic despite the absence of grain. Dynamic range impresses in underlit scenes and the colours convey a muted palette without actually seeming lifeless or overprocessed; this is really an impeccable transfer. The show-offy DTS logo that announces the start of First Reformed on Blu-ray may strike some as a little excessive, but the 5.1 DTS-HD MA track has a sonorousness that is quite unusual and striking for a dialogue-driven film. Voices slice through a wintry stillness that is somehow quite present despite evoking the absence of sound, while the climactic rendition of "Leaning On the Everlasting Arms" is alive and almost discombobulatingly authentic--you can feel Victoria Hill's vocals sending a current through the church's old bones.

Writer-director Paul Schrader records another of his endearingly wheezy and esoteric audio commentaries. In addition to taking ownership of First Reformed's debt to his own Taxi Driver (as well its nods to Bresson, Dreyer, Bergman, and Carlos Reygadas's Silent Light), he provides a masterclass in film technique. He talks about how the 1.33:1 framing all but rules out the over-the-shoulder shot, and how this will be something the viewer processes unconsciously as opposed to "[turning] to your date and [saying], 'Oh wow, he's not using over-the-shoulder!" (I love that he considers this a date movie.) In this same section, Schrader laments the financiers vetoing his decision to shoot the film in black-and-white and discusses how he made a rule against dolly shots just so he could break it. During the funeral sequence, there's a great bit where he remembers asking Neil Young for the rights to "Who's Gonna Stand Up?" even though he was advised it would cost the production fifty grand it didn't have. He figured that because it's a song about the environment, Young didn't write it for the money. He was right. Also on board is the 16-minute "Discernment: Contemplating First Reformed" (HD), which embellishes Schrader's yakker with cast interviews but also reduces it to an electronic press kit. (Amanda Seyfried, pregnant at the time of shooting, does not appear, though she is duly praised.) Priceless B-roll glimpses of the set reveal a stripped-down crew reminiscent of a student film. HD trailers for Hereditary, Under the Silver Lake, and Good Time cue up on startup of the platter; there's also a digital copy of First Reformed inside the keepcase. Sadly and curiously, the iTunes download comes with more supplementary material, including deleted scenes, screenplay drafts, and shot breakdowns--the kind of loaded package that used to be the exclusive domain of physical media. 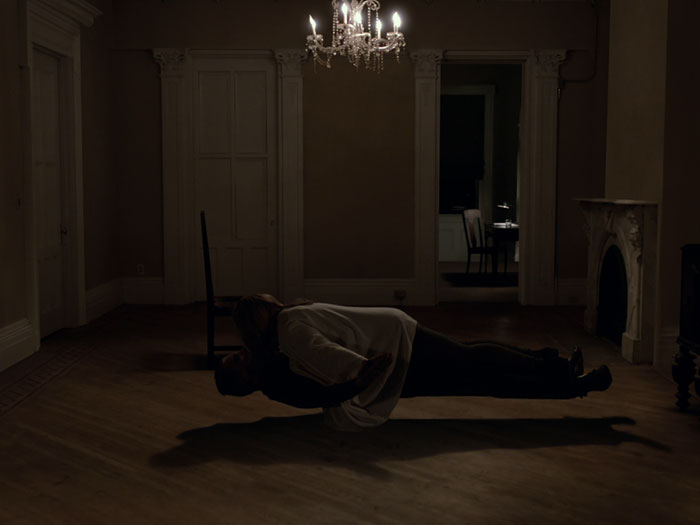