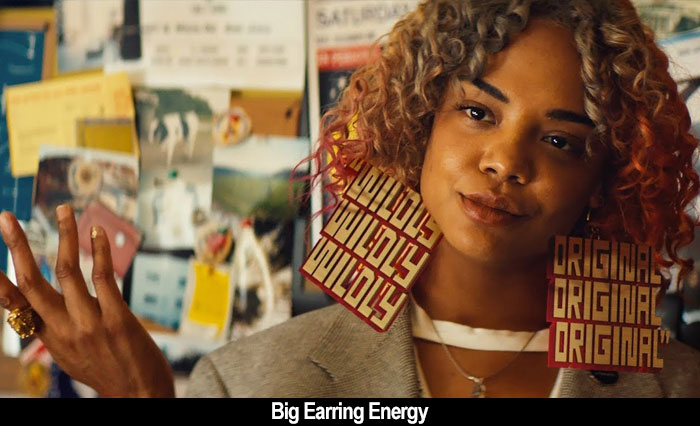 by Walter Chaw There's a moment in Boots Riley's hyphenate debut Sorry to Bother You--it happens in the last third of the picture--that rang so pure and true to me I felt adrenalized, known, inspired. The best art does that: locates that juncture between expression and activism. I felt it during Get Out as I began to recognize the parties where I'd been the only minority guest and somehow also the guest of honor; I hope to feel it one day while watching something about the Asian-American experience. I'd always wondered about the black community coalescing around bootlegs of Seventies kung fu movies, but now I understand it as I find myself vibing to Janelle Monae's and Childish Gambino's energetic, pithy counterculture activism. Sorry to Bother You belongs to this moment of crisis. It's a withering indictment of capitalism and the white ruling class in the United States as it's metastasized into a machine that's only ever interested in consuming its weakest, most underrepresented members. The running joke involves prison/work programs dressed up as a way for entire subsistence, formerly middle-class families to sell their lives to the proverbial "company store." "WorryFree" promises freedom in endless toil. The sign over the entrance to Auschwitz and on the gate at Dachau promised something similar with "Arbeit Macht Frei" ("Work Sets You Free"). In this way, the for-profit prison system in the land of the free is presented for mockery and shame. The idea that the corporate structure in the United States is akin to a prison is raised, too. If films are an empathy machine, this one is the "uncomfortable recognition generator" piece of it. These past eighteen months have been sobering for a lot of my white friends. Sorry to Bother You is a summary of what, until Trump, was easy to sweep under the carpet.

Cassius Green (Lakeith Stanfield) lives in his uncle's (Terry Crews) garage with performance artist/activist Detroit (Tessa Thompson), drives a heap, and works as a telemarketer making blind calls and doing his best not to worry about the news that his uncle is on the verge of getting evicted. Too-old-for-that-shit Langston (Danny Glover) gives Cassius the secret to telephone-marketer success, advising the youngster to use his "white" voice--something that Cassius, talking in high register with ridiculous enthusiasm and calculated obsequiousness, parlays into an invitation into the "upstairs" of his office's Upstairs/Downstairs caste metaphor. His sudden financial and professional success alienates his co-workers, particularly union agitator Squeeze (Steven Yeun), as well as Detroit, who, herself, is in the middle of designing a protest marrying images of Africa with acts of humiliation endured on stage at the hands of her progressive ally audience. It's meaningful that Cassius doesn't understand why Detroit is doing what she's doing when he's in the middle of pocketing vast amounts of cash for selling people into slavery--and it's meaningful that we understand why he doesn't understand. Cassius's meteoric rise ends at a celebratory party at the estate of WorryFree's Jeff Bezos/Steve Jobs CEO Steve Lift (Armie Hammer), where a viral meme of Cassius's humiliation plays on a loop, where Cassius is asked to rap because he's black, and where he's ultimately offered an opportunity that literalizes his allegorical position in relationship to the 1%. Telling more would rob the film of its most provocative decisions; suffice to say that Sorry to Bother You is science-fiction used correctly in a sentence. It's mad as hell and it's not going to take it anymore.

It says something that the idea of a worry-free (or WorryFree) existence in prison presents something of an attraction now in a late-capitalist state in which the next medical disaster will result in catastrophe for the majority of the population; in which most people are living paycheck-to-paycheck; in which massive personal debt seems the single unifying trait among Americans. We work ourselves to death enriching others. Much is made in the film about sticking to scripts, following storylines, fitting into categories. In the end, it's clear that all of it is designed for ease of storage and assimilation. Even its key visual "joke," plays on African-American physiology (real and mythologized), lands in ways both visceral and subliminal. The movie sees you in the way that Charlie Kaufman movies see you. I thought a lot about the likes of The Manchurian Candidate, original and remake, and Network while watching Sorry to Bother You, and how those films (throw in Dr. Strangelove while we're at it) seemed like hysterical paranoia until they became documentaries. The same fate is destined, I fear, for Riley's film. It feels fresh for the directions it's willing to go right now, yet that moment of shock has already passed for me into recognition of contemporary America. There's a lovely Chinese curse that goes "May you live in interesting times." One of the offshoots of that curse is that it's no longer possible to suggest any atrocity "too outrageous." That Sorry to Bother You has a minute or two of effective outrage attached to it speaks to its manifest feeling of horror. The speed with which its abominations are absorbed our new normal only reflects the precariousness of our current state. So watch Sorry to Bother You--and take someone who needs to watch it with you when you do. Once it's over, use it as an opportunity to have a conversation about not how outlandish it is, but how outlandish it isn't. Because, real talk here, everybody: if we don't stop being surprised, we're finished.