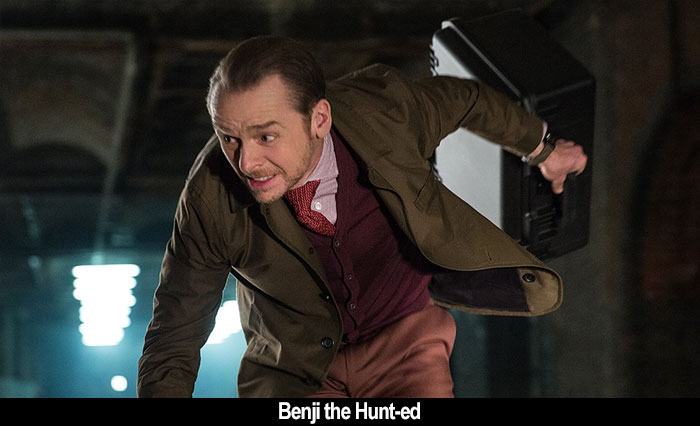 by Walter Chaw As the title flatly states, Mission: Impossible: Fallout (hereafter Fallout), the sixth instalment in our very own Jackie Chan's signature series, will be about Ethan Hunt's (Tom Cruise) emotional baggage, earned over twenty-plus years of saving the world from threats foreign, domestic, and auteur. The main personal casualty for Hunt is the disintegration of his marriage to Julia (Michelle Monaghan), who must remain a "ghost" so that she doesn't suffer the, yes, fallout from Ethan's hero work. She checks in every once in a while, Hunt's teammate Luther (Ving Rhames) tells Ethan's new flame, former MI6 agent Ilsa (Rebecca Ferguson). It's what keeps Ethan going. Accordingly, Fallout starts with an apocalyptic dream of Julia in the hands of maddog terrorist Solomon Lane (Sean Harris)--the type of dream James Cameron used so effectively in Terminator 2: Judgment Day, where everyone turns to charcoal and flies apart. It's important to focus in on all of this because Fallout is about a very specific element of the myth of masculinity, this romanticizing of sacrifice and suffering that men must go through in order to protect the women in their lives. The best part of Martin Campbell's extremely good Casino Royale is when fatale Vesper Lynd (Eva Green) brings Bond (Daniel Craig) back from the dead and his first sentence is spent asking if she's okay. There's a scene like that at the end of Fallout as well when Hunt, back from the dead, apologizes to Julia for everything. It's the sentiment and the situation that makes men in the audience spring a manly leak. Hunt--even his name is a primordial gender assignation--is the avatar for male expectation, which casts his heroics in an odd light, I think: fantasies of male heroism played against grandiose, extravagant, paranoid delusions. I don't know now if I'm talking about Cruise or Hunt. Same, same.

Fallout is focused in on Ethan's devotion to his ex-wife and to his team. Hunt decides early on to save Luther at the expense of losing three balls of plutonium, thus triggering a recovery mission in which CIA muscle Walker (Henry Cavill) tags along to make sure Ethan behaves. The nuclear threat is the MacGuffin of the piece--a particularly uninteresting one, as it happens. Good thing the action sequences, especially a close-quarters bathroom brawl with ace stuntman and martial artist Yang Liang, are so skilfully-staged. There's something bracing, too, about the knowledge that Cruise, to the extent possible, has again performed his own stunts. You get the same charge out of Jackie Chan's pictures during his prime; it's just better knowing that it's "real." I also enjoyed the sequence where a man--Hunt's other longstanding teammate, Benji (Simon Pegg)--is in terrible peril and the audience has been set up to root for a woman, Ilsa, to free herself in time to help him. Whatever Cruise's personal proclivities, these last two Mission: Impossible films have been extraordinarily progressive in their treatment of women. Ilsa is a landmark character in American mainstream cinema, as progressive and interesting as Rey. This is not to absolve Cruise of anything, but to say that Ilsa is one of the best things this popular culture has ever produced, and I'm grateful to witness it.

If we take that as a given, then, it makes her ultimate capitulation to Hunt's heroics (he "frees" her from her contract) feel absolutely incongruous to the character and the film, unless it's read as another of Hunt's--and, by extension, our--hero projections/fantasies. The major movements of Fallout are introduced by Hunt's nightmares. He wakes from one in the back of a truck to the curious looks of his friends and enemies. It's a device that highlights the Impressionism of the piece: this thought that everything that happens in the picture is shifts of light and colour. Indeed, it's very much like a Debussy to Rogue Nation's "Turandot" (the opera a reference to the trials a suitor must undertake in order to 'win' an unattainable woman), Impressionism being the representation of motion at odds with structure and narrative. A pity that Fallout still feels beholden to what are now conventions in this universe: the rubber masks and the Rube Goldberg plot, all of betrayals and counter-betrayals. I wonder what it would've been like as just movement, stitched together on a beat. Whenever the movie brakes, it's boring. Whenever it's moving, it's nothing short of amazing.

Late in the film, just before an already legendary closing sequence that deserves every single inevitable plaudit, Ilsa overhears something that Julia says and mutters, "Oh, I like her." It made me emotional. I'm not entirely certain why that is. I think it has something to do with the conversation about male fantasies. Not the sexual sort of fantasy, but the empowerment fantasy that young men, prepubescent or right on the cusp, tend to entertain: You're the knight errant, you brave unimaginable hardships for your lady fair, and as you lie bloodied and dying at her feet, you apologize for not doing more in response to her lamentations. I don't know that men ever entirely outgrow the desire to be a martyr to their immortal beloveds. It's the root of all our problems. It speaks volumes to what we are as a species that it's also so much fun to watch it play out this way in an expertly-crafted action film. I think Ilsa's approval of--maybe recognition of herself in--Julia hits at the kind of understanding men are looking for from the women they love and want to protect. Ilsa, who absolutely doesn't need Ethan's protection, in this moment acknowledges that Julia is like her in some way--that it's possible for Ethan himself, perhaps, to be saved by a woman who doesn't need him. There's a Harlan Ellison story called "The Other Eye of Polyphemus" that ends with its protagonist being offered help for the first time. Fallout is about a broken man with delusions of grandeur who moves away from a woman who sees salvation in him to a woman who doesn't. This is a good conversation to have.