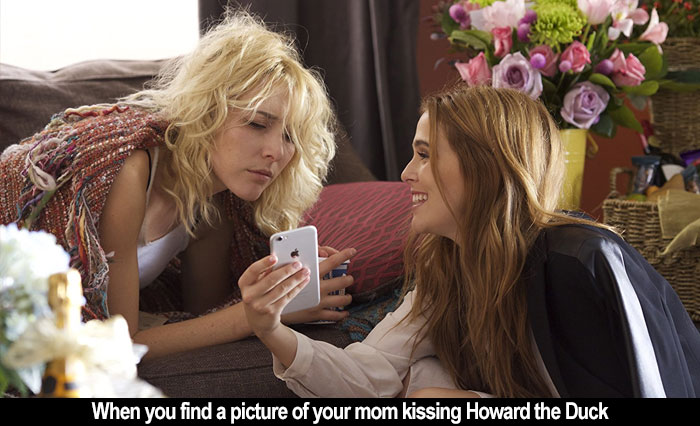 by Alice Stoehr Movie star Sabrina Klein sits in a bathtub, distraught. She bawls at her companion: "Can you try to be my big sister for one second of your life, please?" Her big sister Izzy is a wannabe actress who relies on Sabrina for housing and cushy work as an assistant; emotional maturity is not her métier. Nonetheless, she tries. "We should do a song," she says, so they call up their mom and sing her "Give My Regards to Broadway." They both perform with such gusto that this must be a tradition for them, a holdover from their shared childhood. These may be women in their mid-twenties, yet as they dance around the bathroom they seem momentarily like a couple of kids.

Madelyn Deutch stars as Izzy and wrote The Year of Spectacular Men. This scene comes near the end of the film, by which point each sister's had her share of romantic blunders. Zoey Deutch, who's three years younger than Madelyn and far more famous, plays Sabrina. Lea Thompson is their mom, plays their mom, and directed the movie. (Dad Howard Deutch, who once upon a time helmed Pretty in Pink, co-produced.) It's a true family endeavour. The story centres on Izzy as she bounces from New York to Los Angeles. Per the title, her misadventures span twelve months and several men, though the word "spectacular" is purely sarcastic. Aaron (Jesse Bradford), for example, is the hot-tempered boyfriend who dumps her mere minutes into the movie; Ross (Cameron Monaghan) is the acting-class scene partner who doesn't return her affections; Logan (Brandon T. Jackson) is the drummer who leaves her for his ex; Mikey (Zach Roerig) is a bland skiing instructor; and Charlie (Nicholas Braun) is the film director who orgasms before he even gets his pants off. Not a keeper in the bunch. Throughout Izzy's hapless love life, Sabrina's there by her side, a fount of quips like, "Save a little face while you still have some."

Her relationships serve as fodder for the film's physical comedy. The last time she has sex with Aaron, they lean against a table crowded with ceramics, which shatter on the floor as the table rocks back and forth. Her first time with Logan goes about as well, with his sweat dripping into her makeup and the two of them rolling onto the floor, a guitar pick stuck to her back when she climbs on top. The humiliations of sexual intimacy only compound Izzy's clumsiness. The jokes in The Year of Spectacular Men turn out much weaker, however, when they stray from the subject of hetero courtship. Thompson's mom character is dating a woman named Amythyst Stone (Melissa Bolona), and the two of them behave like stereotypes of New Age lesbians. They talk about yoga, crystals, and quinoa. When Izzy calls them girlfriends, they correct her--they're "soul walkers." It's not a hateful depiction; just tiresome. The same is true of the film's Hollywood satire, which involves Izzy auditioning for the real-world horror movie Zombeavers and paparazzi camping out on Sabrina's lawn. That material seems especially tepid given the Deutch family's collective decades in the film industry. Madelyn's writing is verbose, cartoonish, but hardly trenchant. Although the actress herself is funny, zipping around with her big eyes and messy blonde hair, that still doesn't make lousy punchlines anything but lousy punchlines.

What does help is how boldly Thompson and cinematographer Bryan Koss stage and shoot the comedy. A tracking shot curls around a drugstore as Izzy--on the hunt for a yeast-infection remedy--banters with her sister. A two-shot catches her poolside meet-cute with Logan, their lines overlapping as they fumble to introduce themselves. Then there's the shot of her kissing Charlie on a film set while Sabrina, out of focus in the background, closes her trailer door. In each of these examples, the frame acts as a storytelling tool. Thompson directs deftly in her feature debut, and her daughters' rapport is tangible, especially when they're serenading her in that bathroom. But the screenplay is just too good-natured, too reliant on montage and quick catharsis, for its own themes of loneliness and loss. The very worst of Izzy's depression entails guzzling orange pop and marathoning "The X Files". It's writing with kid gloves on: a facsimile of pain without the sting. If The Year of Spectacular Men were a little tighter and a little meaner, it could be a wonderful movie about sisterhood.