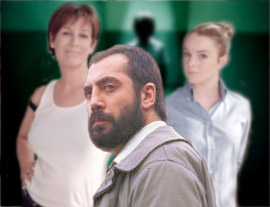 by Walter Chaw Fernando León de Aranda's Mondays in the Sun is probably best described as a Spanish version of Fred Schepisi's Last Orders: a journal of a depressed nation's aging gentry, ferrying one of their own on to the great symbolic hereafter. It aspires to the sort of myth of Vittorio Di Sica's neo-realism, portraying the plight of the dispossessed working class in its unadorned splendour, succeeding by the end only to be a repetitive tattoo around the threadbare theme of men defined by work and destroyed by obsolescence. A castration melodrama in several anecdotal horizontal movements, Mondays in the Sun loses steam and tests patience by making its one point to exhaustion. A scene where the great Javier Bardem rails at the fable of the grasshopper and the ants ("This is bunk! It has no sympathy for someone who is born a grasshopper instead of an ant!") says almost all there is to say about the film, while a lingering close-up of Bardem's battered mug in all its injured brute eloquence is, by itself again, enough.

Santa (Bardem) and his ex-longshoremen buddies sit around in a watering hole, comparing notes on the Monday of their discontent, bumming drinks off their one employed pal and sneaking into soccer matches where part of their view is eternally blocked by a stadium overhang. Lino (José Ángel Egido) attends an endless stream of disastrous job interviews for positions reserved for people half his age and José (Luis Tosar) sabotages loan opportunities when he can't control his rage with his wife's role as breadwinner of the family. There is a coquette, a wonderful scene in which Santa hits on a girl in a grocery store giving out cheese samples, and at least an hour of pathetic vignettes that are exactly like another hour of pathetic vignettes.

The problem with Mondays in the Sun is that it subjects its audience to the same sort of listless lack of focus as its characters--something that could arguably be an artistic choice that nonetheless makes the viewing of it a little like the viewing of an Andy Warhol film: more interesting in theory than in execution. A trio of exceptional performances (and really, the performances are exceptional all around) mainly tends to make the repetitive lightness of the rest of the film frustrating. Mondays in the Sun is a missed opportunity, resembling the central theme again as it happens, and while there's a certain poetic symmetry to a lethargic film about lethargy, it doesn't make for a terribly edifying viewing experience. On the Waterfront this ain't, but at the least the unfavorable comparisons that it draws are to Elia Kazan's classic apologia rather than to Disney's badly-aged 1976 Freaky Friday.

Making his mark with the caustic, generally interesting The House of Yes, Waters approaches Mary Rodgers's oft-adapted, oft-stolen-from same-named novel of parental/adolescent body-switching détente with a sort of literalness that's at once puzzling and instantly a cause for suspicion in our post-modern, ironic world. This not so much the fault of the film as of the time in which it finds itself, Freaky Friday nevertheless broaches intriguing topics (not the least of which a high-school teacher holding a weird sexual grudge for twenty-some years) without having the courage or follow-through to chase those topics down to a satisfyingly mature conclusion. Relationships erupt and disintegrate with a great deal of contrived convenience, all of it aimed at ushering our heroines to their twin podium uplifts. Disappointing, of course, but not surprising for a film aimed squarely at the undemanding middlebrow.

Psychiatrist Tess (Jamie Lee Curtis, looking a little like John Lithgow in drag) butts heads with her rocker teen daughter Annabell (Lindsay Lohan, looking a little like Frankie Muniz in drag), eventually literally so after one of those mystical Chinese people gives them a joo-joo fortune cookie that forces them to switch personalities. Hilarity threatens to ensue as Tess's type-A micro-management facilities and Annabell's 'tween angst are employed respectively to the problems of neurotic clients and psychotic high-school teachers, Tess and Annabell each, predictably, handling the other's problems with insouciant grace while developing a healthy appreciation for each other's life-plights. Freaky Friday isn't so much a step down from its predecessor as it is a step sideways, substituting a few new things for a few commensurate old things with some sort of arcane conversion table for pop culture garbage. Comforting in the way of things that are extremely familiar, there's nothing to say to dissuade the audience primed to attend--and doing so would be without merit in any case: Freaky Friday is completely satisfying, entirely unsurprising, and says all there is to say about itself by the fact of itself. For the record, Freaky Friday, while contemporarily the equal of the original, happens to be better than Vice Versa, Like Father, Like Son, and 18 Again.

Similarly, the Pang brothers' The Eye (Jian gui) functions as a basic remake of, and is horizontal in quality to, Michael Apted's Blink (with flashes now and again of Terence Young's Wait Until Dark and Eric Red's Body Parts), a hodgepodge of tried-and-true blind-woman-in-peril intrigue melded with corneal transplants and donors harboring terrible secrets. With a Cassandra protagonist able suddenly with her new peepers to predict calamity (now we're talking The Mothman Prophecies; her ability to see ghosts, The Sixth Sense; her ability to see the Reaper, The Frighteners), the picture is certainly the most ambitious Chinese horror film in recent memory (the bulk of Asian horror still being pumped out by the endlessly disquiet Japanese), but its scope, effects work, and ambition do little to disguise its massive debt to dozens of similar films that came before. Still, despite its over-familiarity, The Eye manages a decent atmosphere with a nice (and preposterous, revealing our heroine's recently-operated-upon eyes before a blinding light indeed causes cringes, but in a "oh, come on" kind of way) first act in a hospital that, in moments, evokes Lars Von Trier's "The Kingdom". That, coupled with an imaginative Rube Goldberg finale on a bridge and an unusually literal solution, go some ways towards forgiving the picture its dry stretches and fruitless and protracted segues. Originally published: August 1, 2003.